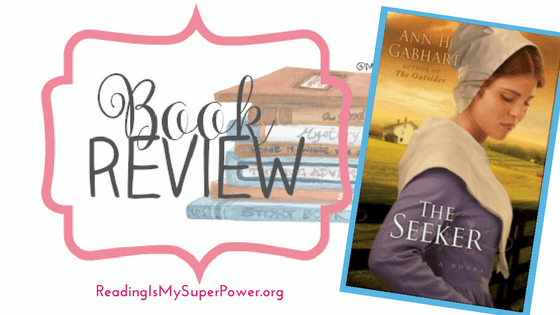 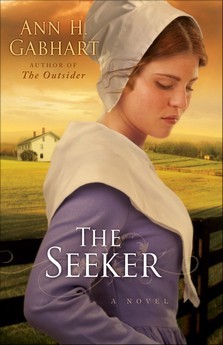 Charlotte Vance is a young woman who knows what she wants. But when the man she planned to marry joins the Shakers–a religious group that does not marry–she is left dumbfounded. And when her father brings home a new wife who is young enough to be Charlotte’s sister, it is more than she can bear. With the country–and her own household–on the brink of civil war, this pampered gentlewoman hatches a plan to avoid her new stepmother and win back her man by joining the Shaker community at Harmony Hill. Little does she know that this decision will lead her down a road toward unforeseen peace–and a very unexpected love.

Ann H. Gabhart brings alive the strikingly different worlds of the Southern gentry, the simple Shakers, and the ravages of war to weave a touching story of love, freedom, and forgiveness that sticks with readers long after they have turned the last page.

I love fiction that makes me think, that teaches me something, and/or that makes me close the book and do some research. The Shaker Series by Ann Gabhart is such fiction. From my teen years until now, I have lived within spitting distance of the Shaker Village of Pleasant Hill, the real-life inspiration for Ms. Gabhart’s Harmony Hill Shaker community in her Shaker series.

I have always thought of it as a peaceful place, one of simple beauty and a history of faithful (if a bit odd) worship of the same God I worship. Uh…. yeah.  About that last part.  After I read Ms. Gabhart’s first book in her Shaker series (The Outsider) some of the things I saw in that story led me to do a little research on my own, and I learned a couple of facts that I didn’t know before.

1. The Shakers not only didn’t believe in marriage (in case you wondered why they died out, this is clue #1), they considered it a sin. In fact, when they talked about two people marrying, they called it “committing matrimony”, like we would say someone has committed murder or committed adultery.

2. They considered the founder of the American branch – a woman they called Mother Ann Lee – to be the second appearing of Jesus. Yep.

When Ann Lee founded the Shakers (official name: United Society of Believers in Christ’s Second Appearing) in America in the late 1770s, she brought a lifetime of heartache with her. Forced by her father to marry, she endured a union that produced four difficult pregnancies and four children who died in infancy.  She was persecuted for her outspoken beliefs and her claims to be “Ann, the Word” in England, and she escaped to America with her husband and several friends and family members. Almost immediately, her husband deserted her for another woman.  And we wonder where she came up with the teachings against marriage and reproduction?  Girlfriend needed counseling.  Instead, she founded what basically amounted to a cult.

In her book The Seeker, Ann Gabhart writes about a young well-bred Kentucky lady named Charlotte Vance who feels misplaced in her own life after her often-absent senator father remarries a conniving woman only a few years older than herself. At the same time, the man she had planned to marry decides to join the Shakers so – clearly – the wedding plans are cancelled. In an effort to save her slave Mellie (who is really more of a best friend & sister), Charlotte and Mellie flee her family estate and seek refuge in the nearby Harmony Hill Shaker Village.  The following quote describes Charlotte’s thoughts as she absorbs everything going on around her during a worship service at her new community:

“But now she was sitting in a church without an altar, watching men and women whirl until they collapsed from the effort, eating imaginary fruit while people watched from peepholes to be sure she was obedient.  Reason was lost.”

Her friend Mellie also had some thoughts about the Shakers and their ways.

“That’s one thing these Shaker folks has got right.  All the prayin’ time.  But they done messed up on a bunch of other things.”

Couldn’t have said it better myself, Mellie.

Now for my review of the book itself (and not just the Shakers):

Let’s start with the characters. A couple of people in The Seeker will bring out so much irritation in you that you will want to reach into the pages and slap them silly.  Or at least I did.  One of them redeemed herself; one of them did not. Some of the characters just made me smile any time they shared page-time with my eyes. Sister Martha, Landon, and Aunt Tish were some of those characters.  I hope you enjoy them as much as I did should you read this book too.

Now for the romance (because that can honestly make or break a book for me).  On Goodreads, the author Ann Gabhart said that this book is her “most romantic Shaker book to date“, not an easy thing to do when the Shakers are celibate. Fortunately, the hero of our story – a sketch artist who is covering the Civil War for Harpers’ Weekly – isn’t a Shaker and neither is Charlotte really.  She is living among them, though, and since the elders monitor all incoming and outgoing mail (don’t get me started!!) for anything they consider inappropriate it is a bit tricky for Adam to let her know how he feels and vice versa. I thought Ms. Gabhart came up with a very creative way to accomplish this though!! I’m not going to spoil it for you – you’re just going to have to find out on your own.

There were only a couple facets of The Seeker that I felt were less than stellar.  First, the letters between Adam and Charlotte while he was embedded in the battles became a bit tedious at times – too much historical detail.  I see what the author was trying to do but it just (in my opinion) took away from the story and dragged it on too long. The other thing that bothered me – and it’s a problem I have with the first two books in this series as well – is that, while a reader can clearly see how warped some of the Shakers’ views were, the truth of Jesus’ grace is either glossed over or given just a brief mention. I am not one for a lot of preaching in fiction books – even Christian ones.  I figure that if I want some preaching I will listen to some – or read a nonfiction Christian book meant to help me grow in my walk with Jesus.  BUT if such a messed-up view of the Bible and God is going to dominate a book as the WRONG way to believe, then I think readers need to see a strong emphasis on the TRUTH to counteract the hopelessness that such falsity leaves in your spirit.

Bottom Line: This is a great read which will open your eyes to an area of history we don’t often study. Gabhart does a good job of creating layered characters – the good, the bad, and the ugly – and her skill at setting is spot-on. While this is the third book in the Shaker series, they are only loosely connected and do not need to be read in order.

(I reviewed a copy of this book from my local public library’s collection. All views expressed are only my honest opinion.) 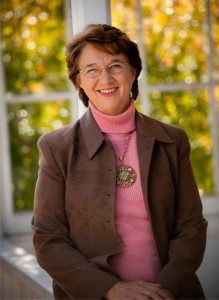 Ann H. Gabhart is the bestselling author of several Shaker novels–The Outsider, The Believer, The Seeker, The Blessed, and The Gifted–as well as Angel Sister, Small Town Girl, Love Comes Home, Words Spoken True, and The Heart of Hollyhill series. She lives with her husband a mile from where she was born in rural Kentucky.


What about you? Did you learn anything from this review (or from reading the Shaker series) that you didn’t know about the Shakers?

7 responses to “Book Review: The Seeker (Shaker Series #3) by Ann H. Gabhart … and a bit of Shaker history”