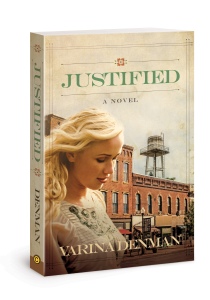 The latest book in the “Mended Hearts” series, Justified takes us back to the small town of Trapp, Texas, and the characters we grew to love (and strongly dislike) in Jaded. Swirling with poetic language and poignant truth, Justified is the prodigals’ story – the ones who came home and the ones who kept walking. It will stir up a Texas dust storm of emotions in you – laughter, nostalgia, swoons, tears, anger, boy-that-dude-needs-counseling, smiles – but the journey is more than worth it.

Small towns are great… except when they aren’t.  And local gossip weighs down that “aren’t” side of the scales considerably. Fawn Blaylock, the spoiled rich girl we met in Jaded, knows what everyone is saying about her “untimely” pregnancy and her continued unwed status, and she believes they are perfectly justified in saying it.  Struggling to make it on her own, she finds God’s grace in some of the most unlikely places – maybe none more surprising than the high school football coach. As she deals with her parents’ demands on one side and the addictive pull of her baby’s father on the other, will her refreshed faith and fledgling romance survive?

In Jaded, I enjoyed reading so much about Ruthie and Dodd and Ansel and Velma; I was delighted to see them appear prominently again in Justified.  Ruthie’s quirkiness continued to make me chuckle but I never would have guessed that, of the two girls, I would end up liking Fawn better.  But I think I do.  Or maybe I just really like the combination of the two as unlikely friends.  Speaking of unlikely-but-loving-it, the romance between Fawn and another familiar character from Jaded really surprised me – but in the best possible way! When I read the first book in this series and tried my hardest to dislike Fawn, never in a million years would I have predicted who she would end up with in Justified, but that’s why I just write reviews and not the books themselves.  And oh honey! This romance? Wow!!! Full of sparks… and kissing! Might want to have a fan handy because the Texas heat won’t be the only thing to raise the temperature 😉

Jaded was about church hurt.  You might say Justified is about community hurt… and judging people without knowing the 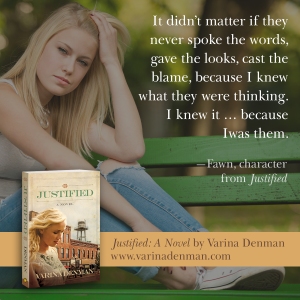 story going on behind the scenes. I heard a great sermon about judging the other day by Andy Stanley, pastor of Northpoint Community Church in Alpharetta, Georgia. He said, “Love doesn’t size you up and write you off.” But, also – “Love doesn’t size you up and walk away.” Meaning, don’t abandon people who are deep in a story that needs a different ending. In Trapp, Texas, a whole lot of people – Fawn included – are sizing people & their stories up and writing them off and walking away.  (Could I end phrases with more prepositions in that sentence? lol)  In Fawn’s case, it took just a few people who decided to stay put.

But there’s another lesson here – Fawn wanted the town to extend the same grace to her that she wasn’t necessarily willing to extend to others, something of which I think we’re all a little guilty. Her eyes were eventually opened to her sin (in another twist I didn’t see coming when I started the book), and maybe we can learn from her example without having to go on our own field trip. You see, Justified is a beautifully written story of second chances – giving them, knowing when to stop, and learning the fine line between the two.  It’s also a story of relentless hope and the reminder that God meets us where we are… if we just stop long enough to look for Him.

I give Justified 5 out of 5 stars and a spot on my faves shelf, and I’m also gonna throw an impatient whine in Varina Denman’s direction because I must read Jilted soon! I NEED to know what happens with Clyde and Lynda and Tyler and Neil and Susan. N-E-E-D.  And I must have updates on all the others, too. So… you know… stop everything else you’re doing please so that you can cater to my demands 😉

(I received a copy of Justified from the author in exchange for my honest review.  I also received a digital ARC from David C. Cook Publishers via Netgalley for review purposes only.)

You can buy Justified now at Amazon.

Varina Denman enjoys writing stories about the unique struggles women face. She volunteers in her local home school cooperative where she teaches creative writing and literature. Varina resides in North Texas with her husband, five mostly-grown children, and a Pomeranian. This is her second novel in the Mended Hearts series. You can connect with Varina at her website and on Twitter.