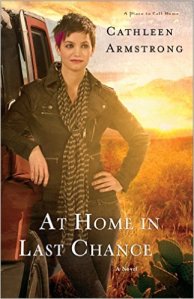 Kaitlyn Reed and Steven Braden, each the proverbial black sheep in their respective families, struggle to rise above the expectations of failure that the long memories of a small town continue to set for them. True, neither of them have a stellar reputation to look back on (sort-of appalling actually) and true, both of them are known for hijacking it out of town when the going gets tough.  But, does anyone realize – or care – that Kaitlyn and Steven might have changed for the better?

As Kaitlyn and Steven find themselves drawn to one another, one big question keeps getting in the way: How will they learn to trust each other when they don’t even trust themselves?

My favorite character across all three books that (so far) make up the Place To Call Home series is Elizabeth/Gran. I guess it’s because she reminds me of my own late grandmother – spunky, feisty, independent… but someone who has an incredibly tender heart toward Jesus and others.  Elizabeth has been a figurative lighthouse in Last Chance, a refuge of sorts for the broken people who need more than just a place to sleep.  In At Home in Last Chance, she is once again serving up a side of unconditional love with her trademark hot tea but at eighty-nine she is starting to show her age a bit more. While it was sad for me to read, I thought Cathleen Armstrong did a wonderful job depicting the emotional struggle this introduces into families as the caregiver begins to need some care.

The other characters, most of whom are familiar to those of us who have read the previous two books, are all sharply written and spot on in their representations of life in a small town.  I particularly found amusing Steven’s absolute bewilderment when neither Kaitlyn nor Olivia seemed particularly into him at first charm. Gotta come up with a new game plan, coach! 🙂 And I know, I’m back to Elizabeth again, but my favorite line in the book comes from her – “They tell me I had a close call, and every time I look in the mirror, I think I didn’t make it after all.”  LOL!! I know the feeling, Gran. I know the feeling.

Cathleen Armstrong’s writing, as always, is finely tuned, easy to read, and hard to put down. In fact, it was so hard to put down that I was quite put out when the book ended far sooner than I wanted. This is actually my only complaint – I felt it finished too abruptly and that some parts of the story needed more completion. Some characters needed more vindication. Some characters needed more reassurance. However, all is not lost! I was thrilled to discover that a fourth book in the series is coming out in September.  (And there was much rejoicing!) I am therefore hoping that the loose ends that bothered me in At Home will be nicely tied up in Last Chance Hero.

Bottom Line: While this is the third book in a series, you could certainly read it as a stand-alone without feeling very lost. But I would highly recommend the first two books as well – especially if you like books set in small towns with a theme of redemption and restoration. And even if you don’t, you’ll love Elizabeth so you should read them anyway 🙂

I give At Home in Last Chance 4 out of 5 stars and wait rather impatiently for the next book to arrive later this year.

(I received a digital copy of this book from Revell Publishers via Netgalley in exchange for only my honest review.)

Cathleen Armstrong is the author of Welcome to Last Chance, winner of the ACFW Genesis Award for Women’s Fiction in 2009, and One More Last Chance.  She lives in the San Francisco Bay Area with her husband, Ed, and their corgi, but her roots remain deep in New Mexico where she grew up and where much of her family still lives. You can follow Cathleen at her website as well as Facebook, Twitter, and Goodreads.

3 responses to “Review: At Home in Last Chance (A Place to Call Home #3) by Cathleen Armstrong”