The story of Rebekah and Isaac has always fascinated me.  For those of you who might not be familiar, it’s a wildly romantic tale found in the Biblical book of Genesis. I can hear what you’re thinking… Genesis? Biblical? Romantic? Just trust me on this one.  Isaac’s father is “very old” (I mean, he was 100 when Isaac was born – so you can imagine how old the poor man is now) and he wants to see his son happily married before he dies. The problem is that none of the single ladies who live near them have any core beliefs in common with Abraham and Isaac… something that makes it difficult to build a solid foundation for marriage.  So Abraham sends his trusted servant Eliezer back to Abraham’s own country on a mission – find Isaac a wife. Understandably Eliezer is a bit overwhelmed at his task and he asks God to give him a very specific sign so he will know which woman God has chosen to be Isaac’s wife.  To sum up, a lovely young woman named Rebekah is shown to be the woman whom Eliezer is seeking and agrees to marry Isaac – sight unseen.  The story ends with this wonderful dreamy-sigh-worthy scene – Isaac is praying out in his fields when he looks up and sees Rebekah and Eliezer approaching in the distance.  Rebekah also looks up and sees Isaac, gets down off her camel (I’m sure she would have taken off her sunglasses had they worn such things back then) and (in my own paraphrased edition) asks Eliezer, “Who is that hunk coming to meet us?” I’m sure she threw in a “Be still my heart” too. We at least know she scampered to put on her wedding veil so she must have liked what she saw! And Isaac? “Isaac brought her into the tent of his mother Sarah, and he married Rebekah.  So she became his wife and he loved her; and Isaac was comforted after his mother’s death.” (Genesis 24:67)  SWOON. That’s basically the Biblical description of their honeymoon, y’all.  Who ever said the Bible was boring or staid??

I’m sure right about now (or much earlier) you are asking, “Carrie, why are you going on and on about this Bible story?” I’m super glad you asked 🙂 Sarah Monzon’s debut novel The Isaac Project releases TODAY (yay Sarah!) and as you might guess by the title it has a lot to do with Rebekah and Isaac and how they got hitched.  Don’t fret though – this isn’t Biblical fiction! It’s an incredibly charming contemporary romance between a woman at the end of her rope and a man who makes a life-changing choice.

Becky Sawyer’s life unravels in a single day. Not only does she catch her boyfriend, the man she hoped to marry, lip-locked with another woman, she also receives the gut-wrenching news that her grandfather, the man who raised her, is dying. His last wish? To see her happily married. Heartbroken, Becky seeks inspiration in the pages of the Holy Scriptures. And finds it in the story of Isaac and Rebekah.

If love couldn’t keep his parents together, Luke Masterson wonders what will make a marriage last. He decides to steer clear of all women—especially crazy ones like Becky Sawyer, who employs a friend to find her a husband. But when he feels the dogged promptings of the Holy Spirit to move across the country and marry a complete stranger, it seems love has little to do with it anyway.

With commitment their only foundation, and love constantly thwarted, can an arranged marriage find happiness in the twenty-first century?

Sarah Monzon’s plot is so unique and drew me in right away.  I spend a lot of time with people from cultures where an arrangement like this is commonplace.  In fact, I’m still haunted by a question that was asked of me one day while sitting around a kitchen table talking about weddings and marriages with several girlfriends from another part of the world, another religion.  Their marriages were arranged for them by their parents and there was no dating beforehand. One young woman, in the midst of our giggles and exclamations at the wedding photos we were passing around, looked up and asked me, “Do you love your husband?”  Well, of course I do… I wouldn’t have married him otherwise.  But to these girls – love doesn’t really factor into the marriage equation right away – it’s something that grows over time because they’ve made a choice to love. An attitude that could benefit more American marriages.  An attitude that sings so poignantly in The Isaac Project.

Luke… I must confess.  I have a bit of a book crush on Luke.  Once he sets his mind to something, he doesn’t let anything get in his way! Even before he realizes his feelings for Becky, he is determined to woo her. His exquisite yet manly tenderness with her is palpable and brought tears to my eyes more than once.  I thought that the times he was working things out with God, especially before he agreed to the marriage, were very realistic.  Sarah also does a fantastic job of channeling a “guy voice” for his thoughts and perspective.  Cracked me up several times at how much like a guy he sounded, something that’s missing sometimes in chick books 😉

And Becky.  My heart ached for Becky.  I’ve been her, emotionally, and even though I wanted to reach into the book and shake some sense into her more than a couple of times… I got it.  It was a privilege to watch her character blossom and blush and flourish under Luke’s care while still maintaining the strong qualities that made her “her”.  The strength in her spirit serves her well in the end, and I was so thankful that Sarah didn’t take that away from Becky as the character matured throughout the book.

Bottom Line: These characters got to me & this book touched my heart. The dual first person narrative adds a wonderful depth of personality and makes for a delightful perspective to the character’s thoughts.  Especially Luke’s.  *dreamy sigh* (You had to know that was coming!) In addition a unique premise, a solid plot, and a charming writing voice combine with a dash of suspense to ensure a truly enjoyable experience for readers. Sarah Monzon is a fun new voice in contemporary Christian fiction, and I for one look forward to more from her in the future! If you love reading books by Katie Ganshert, Varina Denman, and Becky Wade… you will love The Isaac Project too!

I give The Isaac Project 5 out of 5 stars! Come back tomorrow for my interview with Sarah Monzon and your chance to win a Kindle copy of this wonderful book 🙂

(I received a copy of this book from the author in exchange for only my honest review.)

(This post contains affiliate links. I will receive a small compensation if you purchase anything through my links. See my disclosure.) 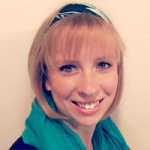 Sarah Monzon is a pastor’s wife and a stay at home mom of two small children. She has a bachelor’s degree in elementary education from Southern Adventist University. Sarah is a member of American Christian Fiction Writers (ACFW). The Isaac Project is her debut novel. You can connect with Sarah online at her website, Facebook, and Twitter.