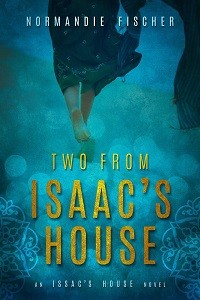 About Two From Isaac’s House

Inheritance? Check. Solo trip before getting married? Check. Dangerous hot guy she shouldn’t get involved with in a thousand years? Oh, honey, that’s a check.

From author Normandie Fischer comes a new romantic suspense that takes the reader from the hills of Italy to the Jordanian desert and from there to an Israel on the brink of war with Hamas.

Rina Lynne has never traveled far from Morehead City, North Carolina. So when she inherits her father’s secret stash, she’s ready to kick up her heels and go adventuring before she settles down to marry her long-time fiancé. First stop, Italy.

Enter Tony (aka Anton), an engineering geek conned into helping his Israeli cousins as a sort-of spy. From the moment he meets Rina, he’s distracted, which is not a good idea when there’s already been murder and theft. And from the moment Rina meets Tony, she’s fascinated, which is also not a good idea. He claims to be an Arab-American, and she’s half-Jewish. And engaged. And then there are all those bodies dropping around them, each linked to the gathering storm in the Middle East.

“But the wonderful thing about HaShem [God] is that he’s there in our wrecks and for our wreckage.”

If you asked me how to classify this book in a library, I’m not sure where I would place it.  Two From Isaac’s House reads like Southern fiction but is very much a novel of international intrigue. You will want to curl up with it and absorb the delicious way the writing lilts across the page, but at the same time Fischer’s command of international suspense will keep you on the edge of your seat. And then there’s the new romance and the new friendships – sweet in a way that wraps you in an old & comforting quilt but never so saccharine that it makes your teeth hurt. In a book that could go political in a heartbeat, the plot stays just outside that line and instead whispers a few subtle hints toward the spiritual that both surprised and touched me with their presence. Normandie Fischer’s latest book is definitely a dichotomy of genres, but I loved the result!

The author’s writing style is so beautifully descriptive (without over-telling) and immerses readers in the scenes – the sights, the smells, the sounds, the emotions.  Wry Southern humor subtly peppers each chapter, providing delightful relief in the midst of suspenseful tension.  Fischer’s words lilt in a pleasing meter that, as I mentioned earlier, makes you want to curl up and settle in. For example –

“The train clackety-clacked north, its rhythm lulling her toward sleep , but she couldn’t doze off alone in a compartment with a man who looked like he’d slipped off the set of The Godfather.”

“A memory slipped into place of Uncle Adam reaching out his large hands to pull her onto his lap, breathing peppermint stories of God’s miracles as if they were real.”

Bottom Line: With her lyrical ability to turn a phrase, Normandie Fischer has become a new favorite author for me. The characters develop naturally throughout the course of the story, particularly Tony and Rina who both sharpen their own personal identities despite (perhaps because of) the challenges they face at every turn.  I have no problems recommending Two From Isaac’s House for my readers who lean toward the inspirational market (only a very few mild uses of profanity & the romance is clean) as well as those who prefer general market novels (a gentle spiritual thread is present but it is in no way “preachy” or the focus of the story).  And also… I want the sequel post haste! 🙂 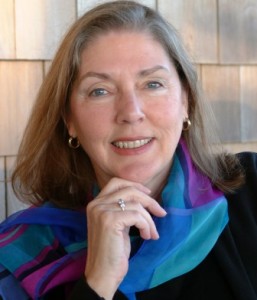 Normandie Fischer combines a love of all things Italian with a fascination for the cultures and cuisines of the Middle East, an interest fostered when she studied sculpture in Perugia and lived among Arab students. She and her husband retired from cruising Pacific Mexico on board their ketch, Sea Venture, to care for her aging mother, who now sails with them whenever the opportunity arises.

Two from Isaac’s House is her first romantic suspense. She is better known for her women’s fiction, including Becalmed (2013), Heavy Weather (2015), and Sailing out of Darkness (2013).

8 responses to “Review: Two From Isaac’s House by Normandie Fischer”