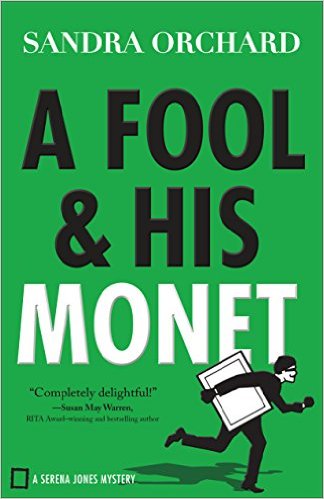 Serena Jones has a passion for recovering lost and stolen art–one that’s surpassed only by her zeal to uncover the truth about the art thief who murdered her grandfather. She’s joined the FBI Art Crime Team with the secret hope that one of her cases will lead to his killer. Now, despite her mother’s pleas to do something safer–like get married–Serena’s learning how to go undercover to catch thieves and black market traders.

When a local museum discovers an irreplaceable Monet missing, Jones leaps into action. The clues point in different directions, and her boss orders her to cease investigating her most promising suspect. But determined to solve the case and perhaps discover another clue in her grandfather’s murder, she pushes ahead, regardless of the danger.

With spunk, humor, and plenty of heart-stopping moments, Sandra Orchard gives readers an exciting string of cases to crack and a character they’ll love to watch solve them.

“Completely delightful! A Fool and His Monet is laugh-out-loud funny! Readers who love Stephanie Plum will delight in Serena Jones. An engaging and charming read–I can’t wait for more!”–Susan May Warren, RITA Award-winning and bestselling author of the Christiansen Family series

“I should have listened to my mother.”

From the very first chapter, Sandra Orchard immerses her readers into the action, and the atmosphere of suspense remains high throughout A Fool and His Monet.  So does the humor. The first person POV allows readers not only to see the action solely from Serena’s perspective but also to peek inside the wry hilarity of her thoughts. And speaking of hilarity – Great-Aunt Martha. Because while Serena is busy trying to solve an art theft, she also has to keep her eye on Aunt Martha who’s doing some outlandish theorizing – and some madcap investigating – of her own.

And while I’m on the subject of Great-Aunt Martha, she’s one of the characters in this new series who – I believe – is more than she appears at first blush.  There were actually several throughout the course of A Fool and His Monet, but some are critical to the plot so I won’t elaborate on those for now.  Along with Martha is Nate, the hunky dimpled building superintendent for Serena’s apartment.  I suspect he is more than we realize yet too… or at least was in the past. He has some super cool secrets, I do believe, and I’m quite intrigued to find out more about Aunt Martha and Nate in future books.

Which leads me to Tanner.

Serena is the kind of gal who guys can’t help falling in love with, whether she realizes it or not. This makes me hate her just a teeny little bit because I have absolutely no concept of what that’s like lol. But I do love her wit and her quirks and the fact that, even though she’s an FBI agent, she’s not without fear. And I’ve digressed…

While the romance angle isn’t heavy at all, there are still guys falling left and right for Serena in A Fool and His Monet. Only two really merit attention.  From me and from Serena. Tanner, her training agent. And the aforementioned Nate.  Tanner is quick-witted, protective, and he enjoys teasing Serena about her quirks. Plus, his eyes soften whenever he looks at her.  Which is just …  MELT.  To me, this is what edges him out just slightly over Nate who does have his fair share of redeeming qualities too. He’s easy-going, protective, dimpled, not to mention that he shares Serena’s love of art & well-brewed tea & old movies. Plus, there’s the whole “possibly more than he appears to be” aspect I just talked about.

Sandra Orchard has a page on her website for readers to vote on which of these two guys Serena should end up with. I CANNOT SETTLE ON ONE! I go back and forth. Yes, Tanner’s eyes soften whenever he looks at her…. BUT Nate has those dimples and shares so many of Serena’s interests. I JUST DON’T KNOW!! lol.  But if you’ve read the book and want to vote, click here. (Confession: I voted for Tanner.  It was the softening eyes thing.  But now I feel bad for Nate. I may not be able to read the next book until someone tells me who she’s leaning toward. Love triangles send me into apoplexy.)

Along with the current case – which is full of twists and turns and clever diversions – there is a underlying thread of the cold case murder of Serena’s grandfather. This is something else which intrigues me and which has me eagerly waiting for the release of book 2 – Another Day, Another Dali – in September.

Bottom Line: Cozy mystery fans, don’t miss this new series by Sandra Orchard! It’s campy. It’s quirky. It’s full of opportunities to smile. You may even laugh out loud. A hint of a brewing love triangle, plus a bit of intrigue surrounding one of the potential beaus, will appeal to people who also like some romance with their sleuthing.  Great-Aunt Martha is quite simply a hoot and will delight readers with her Jessica Fletcher-ing, while Serena wins them over with her endearing personality that’s full of wit and eccentricities. In fact, Serena Jones may be one of my favorite FBI agents to date because she feels real and human and like someone I would want as a friend. While A Fool and His Monet is lighter on the “Christian” and heavier on the “fiction” than most in the genre, sometimes – and in this case – I think that’s totally okay.  I highly recommend this book to my readers in both the Christian fiction and general fiction markets! 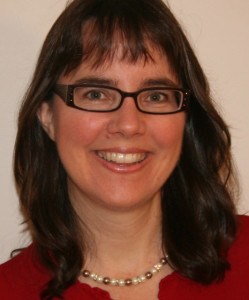 Sandra Orchard is a multi-award-winning author of mysteries and romantic suspense  She is an active member of American Christian Fiction Writers, Sisters in Crime, Romance Writers of America and The Word Guild (Canada). A mother of three grown children, she lives in Niagara, Canada with her real-life-hero husband and writes full time…when not doting on her young grandchildren.  Learn more about Sandra’s books and bonus features at www.SandraOrchard.com or connect at www.Facebook.com/SandraOrchard

3 responses to “Review: A Fool and His Monet by Sandra Orchard”