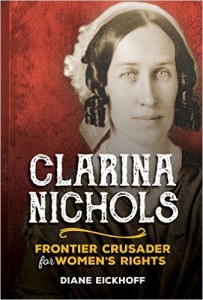 In 1827, when Clarina was a teenager, she remembers, “I had a longing desire to do good.” But America wasn’t ready for an ambitious, intelligent young woman. Clarina was supposed to get married and start a family. But her husband turned out to be abusive and a deadbeat. The law was of little help. Her situation seemed hopeless.

This is the amazing true story of how Clarina Nichols turned tragedy into triumph—and went on to help fuel the movement that created a brighter future for women everywhere.

“The name Clarina Nichols deserves to be placed next to those of such luminaries as Susan B. Anthony and Elizabeth Cady Stanton” —Booklist

“Readers will gain a sense of the bravery and conviction it took for Nichols and other women to challenge unjust and ingrained ideologies in order to ensure freedom for future generations.” — Publishers Weekly, Nov. 30, 2015

Geared toward middle grade and teen readers, Clarina Nichols presents the true story of a remarkable woman and shines a spotlight on the struggle for women’s rights in the 1800s. It’s easy to read, but extremely captivating and full of great information that will make women grateful for the rights we do have now and fiercely proud of those who fought – without the same rights – to obtain them for us.

I had never heard of Clarina Nichols before picking up this book by Diane Eickhoff, and what a travesty that is! Nichols was such a fascinating person – a woman who dared to break out of the mold that society had predestined for her.  In her day, she could achieve no further education than the district school.  College for women was unheard of. So were “careers”. Marriage and teaching were really the only options available to females after they had completed their truncated education.  As Clarina herself lamented, “I had a longing desire to do good, but the teacher’s desk was the only sphere that opened before me.“ 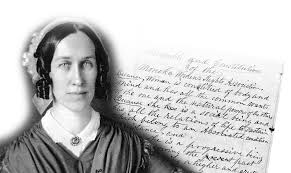 Now… I’m a teacher.  And a wife. Teachers and wives and mothers are vital to the framework of society.  But when they are a woman’s only choices, a great disservice has been done to both the female gender and to society. Fortunately for all of us – and here, my heart swelled with pride for those gone before me – Clarina Nichols found herself “part of a growing community of women who were finding their voices, both as individuals and as part of a movement that was about to change the world.” I found especially intriguing how Clarina’s path connected with suffrage leaders such as Susan B. Anthony and Elizabeth Cady Stanton – Nichols was their friend and was well known for her rousing speeches and the newspaper articles she wrote.

Another aspect to Clarina Nichols which really interested me was her connection to Lawrence, Kansas – my husband’s hometown. I enjoyed learning more of its history, including several things I hadn’t been aware of before reading this book.  Closely connected to her time in Kansas is Clarina’s association with the Underground Railroad, a secret network of brave people and safe houses used by escaping slaves on their journey to freedom.  I am passionate about the Underground Railroad, and my history-loving heart skipped a beat when I discovered this chapter of Clarina’s story.

Bottom Line: Clarina Nichols, the woman, is a voice that until recently has been lost to history, despite the fact that she was highly respected in her day for her work in suffrage (as well as basic rights for women) and civil rights. Clarina Nichols, the book, is well-written, easy-to-read, full of inspiring information, and will appeal to readers in middle grades through adulthood. Looking back to Nichols’ time made me appreciate all I take for granted as a woman in today’s society but also motivated me to continue to fight for the rights of those who aren’t yet given a voice. As Diane Eickhoff says in her epilogue, Clarina Nichols “would have been surprised at how far we have come – and how far we have yet to go.”

Diane Eickhoff grew up on a farm in Minnesota, taught school in Appalachia and New York, and helped edit a newspaper for an anti-poverty program in Alabama. She has written widely for publications aimed at high school and younger readers. Her biography, Revolutionary Heart, from which this book is adapted, was named a Kansas Notable Book and the winner of ForeWord magazine’s Book of the Year competition in biography, among other honors. She lives with her husband, author Aaron Barnhart, in Kansas City.