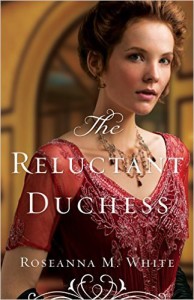 Will Fleeing the Scottish Highlands Only Leave Her in More Danger?

Lady Rowena Kinnaird may be the heiress to a Highland earldom, but she’s never felt good enough–not for her father, not for the man she thought she’d marry, not for God. But after a shocking attack, she’s willing to be forever an outcast if it means escaping those threatening her life.

Brice Myerston, the Duke of Nottingham, has never been one to shy away from manor-born ladies, yet the last thing he needs is the distraction of the newly introduced Lady Rowena. He has enough on his plate having recently come into possession of a rare treasure for which many would kill, yet those around him seem intent on pairing him with this desperate but beguiling girl.

Rowena is reluctant to marry this notorious flirt. And when she learns that Brice is mixed up in some kind of questionable business with a stolen treasure, she fears she’ll end up in more danger than she fled.

Those two words pretty much sum up my feelings about The Reluctant Duchess by Roseanna White.

Brice Myerston, the Duke of Nottingham, is a “hero of heroes”.  Charming. Godly. A man who prays. A man who listens to God. A man who rescues. A man who protects. He’s not perfect, but his flaws – few though they may be – make him all the more endearing.

One of my favorite glimpses into Brice’s character comes with the admission that he had been unobtrusively slipping into Rowena’s room at night during her nightmares. He’d had the door oiled and planed so as not to startle her awake and add to her panic.  He knew even in the dark which floorboards to avoid, which tables to sidestep. And as he calmed her terror, he prayed. And when he returned to his own room, he prayed. And when his own desires began to overwhelm him, he listened to God’s warning.  And he prayed.

Rowena Kinnaird, his new duchess, is a heroine who immediately wins readers’ fierce loyalty. And then Brice’s. My heart broke for the abuse she had suffered, perhaps the worst sort of abuse a woman can endure, but I cheered for her as well.  Because she is stronger than she believes, and it’s her heart and spirit which define her – not what a cowardly abuser did to her. As she begins to realize this for herself and as she begins to flourish under Brice’s steady affection, Rowena wins her own loyalty.

The moment that Rowena tumbled into my heart permanently is when she raises her hand and knocks on a certain door. Facing possible rejection, but ready to fight for “the now as well as the someday”. Her legs were shaking. Her throat tight.  Her determination threatening to flee at any moment.  But she listened to God.  And so she stood.  And she walked. And she knocked on that door.  Right then, I knew I would be firmly in Rowena’s corner for the rest of the series!

The settings – both in the Highlands and in England – are breathtaking and they sweep you away nearly as much as the characters do.  I also enjoyed the continued (from the first book) intrigue surrounding the Fire Eyes, the red diamonds believed to be tainted with the tiger’s curse, and I’m looking forward to discovering how it plays out in A Lady Unrivaled in September. Especially given the character currently – unknowingly – in possession of them.

Bottom Line: Unimaginable heartache collides with charming wit to create a mood that is the right blend of both.  The settings, the suspense, the romance, the characters – all of these elements immersed me in the story and kept me captivated from start to finish. Roseanna White expertly pens an exquisite and powerful reminder that God “never forgets us, even when we feel He has.” And that no matter how storm-ridden our current circumstances, the true adventure lies in anticipating how He will eventually turn the clouds to sunshine. A beautiful story, rich in setting and vibrant with characters, The Reluctant Duchess belongs on every historical fiction fan’s must-read list!

KissingBook Level: 3 / May forget to breathe on occasion 🙂 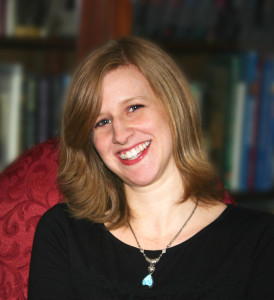 Roseanna M. White pens her novels beneath her Betsy Ross flag, with her Jane Austen action figure watching over her. When not writing fiction, she’s homeschooling her two children, editing and designing, and pretending her house will clean itself. The Reluctant Duchess is Roseanna’s eleventh published book. Her novels range from biblical fiction to American-set romances to her new British series. She lives with her family in West Virginia. Learn more at www.RoseannaMWhite.com

Though I’ve written nearly thirty books, thirteen of which will be out by the end of 2016, there’s something very special about the Ladies of the Manor Series. The first book, The Lost Heiress, is a rewrite of the first novel I ever wrote—at the age of 12-13. Once I finished that first novel, I made it my goal to keep adding more manuscripts to my “finished” file. I started in immediately on the sequel . . . and soon ran into a problem. You see, I knew who I wanted these characters to be. Brice Myerston, a duke, whom readers would have met in the first book. And a young lady from Scotland who had suffered abuse.

That’s it. That’s all I knew. And it stymied 13-year-old me, who hadn’t a clue what it felt like to suffer such things, and whose imagination, while rich, just lacked a certain basis in the realities of human nature. Probably a good thing that I gave up on the story back then, and didn’t dust it off again until my mid-20s, when I was reworking the series. And better still that Rowena had many more drafts to go through before she finally took to the printed page in The Reluctant Duchess.

I narrowed my setting down, during those years, to the Highlands, and I chose Loch Morar because of how perfectly the region of Lochaber suited the story I wanted to tell. Isolated. Stark. Rugged. Beautiful. Sometimes cruel. This was a land utterly perfect for my heroine’s family, for her back story. Then came the challenge of picking a clan for her to belong to—because lemme just tell you, one could quite easily offend with such choices, if not portrayed properly, LOL. And because I wanted her father to be chief of her clan, I ran the risk of people mistaking him for the actual chief, if I chose an actual clan.

A writing friend came to rescue and offered her last name for my heroine: Kinnaird (pronounced “kin-AIRD”), which is a sept (branch) of another clan in reality, so had no chief of its own, but was still a well-established Scottish name. Perfect!

So Rowena Kinnaird was born after many years of her character floating in and around my head and computer screen. And I got to pair this backward, sometimes shy, sometimes stubborn Scottish lass with the charming, suave, polished English duke I’d had planned out since I was 13.

I went to great pains in The Lost Heiress to make Brice Myerston a favorite character, so that readers HAD to read his story. Mwa ha ha ha. ? So far, so good on that score! Brice is a hero who has his faults, but he also has character. He has faith. He has a good heart, he’s considerate, he’s understanding. And he’s also so accustomed to charming everything female that he doesn’t quite know what to do when Rowena doesn’t seem inclined to be charmed.

There are clashes. There is tension. There’s much healing on Rowena’s part. Many trials for them both. But I hope that through this story of The Reluctant Duchess readers see what it means to triumph over past hurts. And how brightly God shines against the darkness.

To celebrate the release of her book, Roseanna is giving away a few of Rowena’s favorite things. 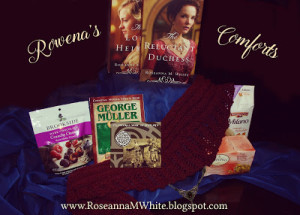 April 14: Reading Is My SuperPower

April 23: The Power of Words

April 24: Under His Wings

April 25: For The Love of Books

4 responses to “Review (and a Giveaway!): The Reluctant Duchess by Roseanna M. White”