Welcome to my second stop on the Jenni James Faerie Tale Collection tour with Singing Librarian Books. It is my great delight this time to spotlight & review book #10, also known as Rapunzel. 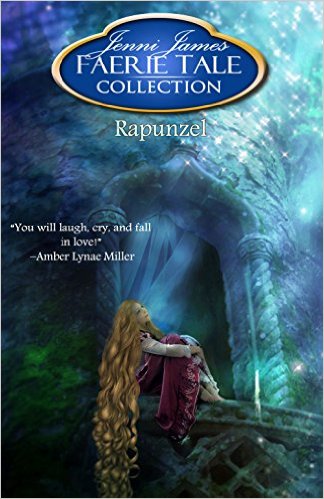 On Rapunzel’s sixteenth birthday, her parents are turned to stone by the evil witch, Lady Vactryne, and the girl is taken to be forever hidden away in a tower. The young princess is afraid and all alone, and as the months pass by and her attempts to escape become more desperate, she begins to lose hope that anyone will come to save her.

Prince Jonathan of Balligyrn has loved Rapunzel since they were children and has vowed to battle the witch, bring Rapunzel back, and restore her kingdom, no matter the cost. It has been years since he last saw her and asked her to wait for him to return from school. Now Jonathan only hopes he is not too late.

The cunning witch has other plans for them both, one that does not involve losing her dreams to mere fools. Who will win—the woman bent on revenge, or the young girl determined to overcome it all? 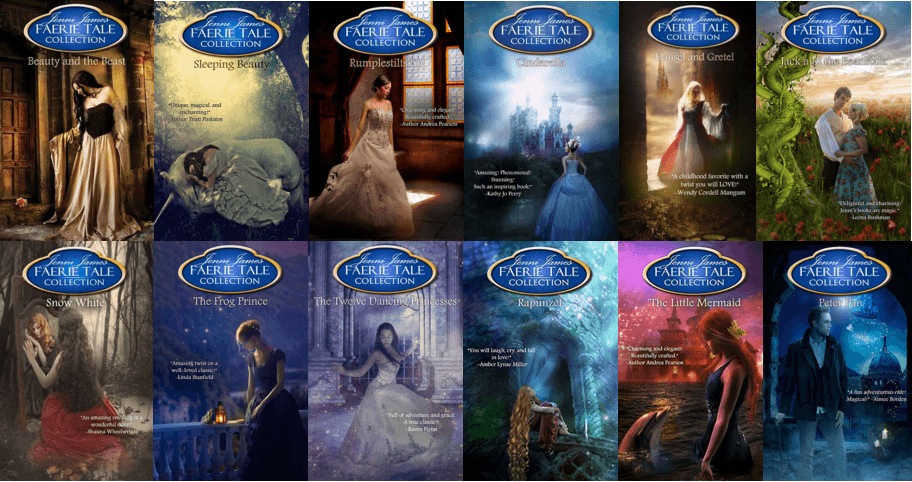 “RAPUNZEL, RAPUNZEL, LET DOWN your hair, that I may climb your golden stair!”

The twelve-year-old girl giggled as she looked down from the fairy house her father, the king, had the gardeners build for her on her eighth birthday. The small home was high in the tree so she could feel like she was flying, just like a fairy. There were two ladders made of rope that led up to the charming wooden abode, but Prince Jonathan liked to tease her. Her hair reached past her feet, and he would say that if she braided it and hung it over the edge, he could climb it instead of the ladders.

“Never! Come up like a true gentleman, or do not come up at all!” she called down to him.

“You are such a spoilsport.” He grinned as he clutched the nearest rope and began to climb up.

“’Tis a good thing you decided to show yourself. I have pastries from Cook up here.” She taunted him with one as she took a large bite, crumbs tumbling to the ground past him. Some even landed on his head, putting chunks of white in his brown hair.

“Princess Rapunzel, I will now eat two for such boorish behavior,” he called up.

“With as slow as you are, they will be all gone before you get here.” She took another bite and quickly ducked inside when he increased his speed up the fifteen rungs or so of the ladder. Opening the small door to the house, she beamed a smile at him as he climbed onto the porch. “Welcome!”

“Ha!” Jonathan brushed his hands upon his trousers. “So, where is mine?” he asked as he looked pointedly at the pastry in her hand.

“Right here.” She took another bite and then giggled when he chased her inside the little place. It was about six feet by eight feet. It had just enough room for two small chairs and a table, a fine old rug, and a collection of older pillows. On the table was the basket with the pastries.

He dug in and began chewing on one while holding up another. “See?” he said around a mouthful. “They are both mine. You cannot claim them.”

“I can, if you continue to drop as many crumbs as this upon my newly cleaned floor!”

“You sound like a fishwife!” He took another bite and plopped down on a cozy section of pillows.

“Me? A fishwife?” She pretended to act scandalized as she sat down next to him, her white skirts spread prettily around her.

“Whot?” He grinned. “Do you not think royalty can act like commoners, then?”

She rolled her eyes. “I do not think the two should ever be compared.”

“Fine.” In an odd moment of seriousness, he straightened his features and said, “Forgive me.”

She waited for the coming quip. Something about him being mistaken—she was not a fishwife, she was more of an ogre—but it never came. Her smile fell and she leaned back, looking into his darkened eyes. “What is it, Jonathan? Is something wrong?”

He shook his head slightly and sighed. “When is anything wrong with me?” He did not look away.

“Never. You are always in perfect spirits.”

“Precisely. So why do you assume something is bothering me now?”

He blinked and looked away.

“No. I would like you to speak to me. Jonathan, ’tis not fair. I share all my secrets with you.”

His gaze met hers and he stared at her for what felt like several minutes. She waited. For once in her chattering existence, she wanted to know, really know, what he had to say. And she did not dare ruin the moment by speaking over him.

Finally, she was rewarded for her persistence.

“I have to go away to school.”

“What?” She felt as though a load of rocks had fallen upon her chest. “When? Why? For how long?”

“I have one week before I am sent off.”

“Jonathan!” She reached for his hand, something she had never done before. She could not bear losing him.

He squeezed her fingers. “I had to come and tell you. I made Father bring us here so I could say good-bye properly.”

“How long will you be gone?”

He looked away then. “I do not know, exactly. It could be years before I see you again.”

She shook her head. “No. No! What about my coming-out ball? You promised me you would be there!”

He glanced back and chuckled. Reaching up, he brushed a lock of her long hair out of her face. “Rapunzel, that is years away. You are only twelve, and I am merely thirteen. It will be fine.”

“Will you be back once I turn sixteen, then? Do you give your word you will dance with me?”

Hope. He could only hope. Possibly four years without him? Without his laughter? His wisdom? His larks? What would she do without him?

“You are crying. You cannot cry,” he said gently. “It is good for me to go away to school.”

“No. I wish you to remain stupid and stubborn and all things horrid so that I may have you near me!”

“Listen to yourself. You do not mean it!”

She brushed at the tears. “You are correct. I cannot mean it. I wish you the best. I always have. I guess I should have realized they would send you away sooner or later. I just did not think about it.”

“I wish I could stay, or take you with me. But I cannot.”

They had been playmates and the best of friends since she was four and he nearly five. They had been inseparable and visited one another as much as possible. They had long wondered if there was some sort of understanding between the two royal families when it came to them, if they were betrothed to one another. But neither of them cared; there was no one else they would wish to be with anyway.

“I have something for you,” he said. “Something to remember me by.”

She did not want a token—she wanted him. But when he pulled out a pretty gold chain with a sapphire butterfly pendant, she gasped. “It is beautiful.”

“Come here so I can put it around you.”

She turned, scooted closer, and held up her long hair. She felt his hands secure the necklace in place.

“Rapunzel?” he asked as she released the mass of curls.

“We have often wondered if our parents planned for us to marry. And I know this is very sudden and soon . . .” His voice trailed off.

She turned slowly toward him, her heart beginning to lighten and beat strangely within her. “What are you saying?”

He gulped and closed his eyes. “Will you wait for me?”

“Truly?” He peeked one eye open.

A huge burst of air released from him, and he smiled. “Good.”

All at once, he leaned forward and kissed her swiftly upon the lips before jumping up. He dashed out of the little house and worked his way down the ladder.

She touched her mouth, marveling at the tingly way her lips felt, before leaping to her own feet and leaning out the window.

He was already to the ground when she called out.

“Jonathan, don’t you dare forget me! You better come back—do you hear?”

He looked up at her. “Even if you were a thousand miles away from here, I would still come back for you. I would find you. You have the Balligryn pendant, after all. And I cannot become king without it!”

He grinned. “Do not ever lose it. My father would slay me.”

And then he ran away, Rapunzel’s heart twisting and jolting and beating like it never had before.

The romance in this version of Rapunzel is my favorite kind  – two lifelong friends who are in love and refuse to give up on each other. I enjoyed seeing Rapunzel and Jonathan as tweens; their affection for each other was palpable even then. And once they are reunited as young adults – *dreamy sigh* there are some great kisses! 🙂

This story also deals with a very important topic, and one which I feel is very realistic considering all that Rapunzel is going through.  While I wasn’t prepared to read about a suicidal Rapunzel, it made sense… and while I’m still not sure how I feel about its inclusion in the story, James weaves a vital message into Rapunzel’s tale. One that teenagers and young adults need to see more in books – and music and movies and social media. “No matter how desperate and bad things may seem, all is not lost. There is hope. There is a way to overcome. Find it. Search for it. Believe in it.”

Bottom Line: This isn’t the Disney version of Rapunzel, but it IS artistically tangled – with the beauty of young romance, the healing power of love, and the dark side of depression. It’s not always a feel-good, happy fairy tale but it addresses some important topics for its target audience. I would recommend this for the upper age of the young adult age bracket, but I do think it’s also a great book for teens to read – perhaps with accompanying parental discussion. 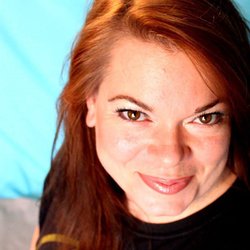 Jenni James is the busy mother of ten kids (7 hers, 3 her hubby’s) and has over twenty-five published book babies. She’s an award-winning, best-selling author, who works full-time from home and dreams about magical things and then writes about what she dreams.

Some of her works include The Jane Austen Diaries (Pride & Popularity, Emmalee, Persuaded…), The Jenni James Faerie Tale Collection (Cinderella, Snow White, Rumplestiltskin, Beauty and the Beast…), the Andy & Annie series for children, Revitalizing Jane: Drowning, My Paranormal Life, Not Cinderella’s Type, and the Austen in Love Series.

When she isn’t writing up a storm, she is chasing her kids around their new cottage and farm in the tops of the southwestern mountains, entertaining friends at home, or kissing her amazingly hunky hubby. Her life is full of laughter, crazy, and sunshine. 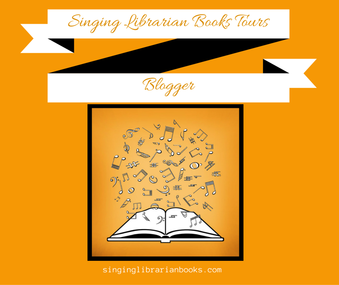 2 responses to “Review (and a Giveaway!): Rapunzel by Jenni James”