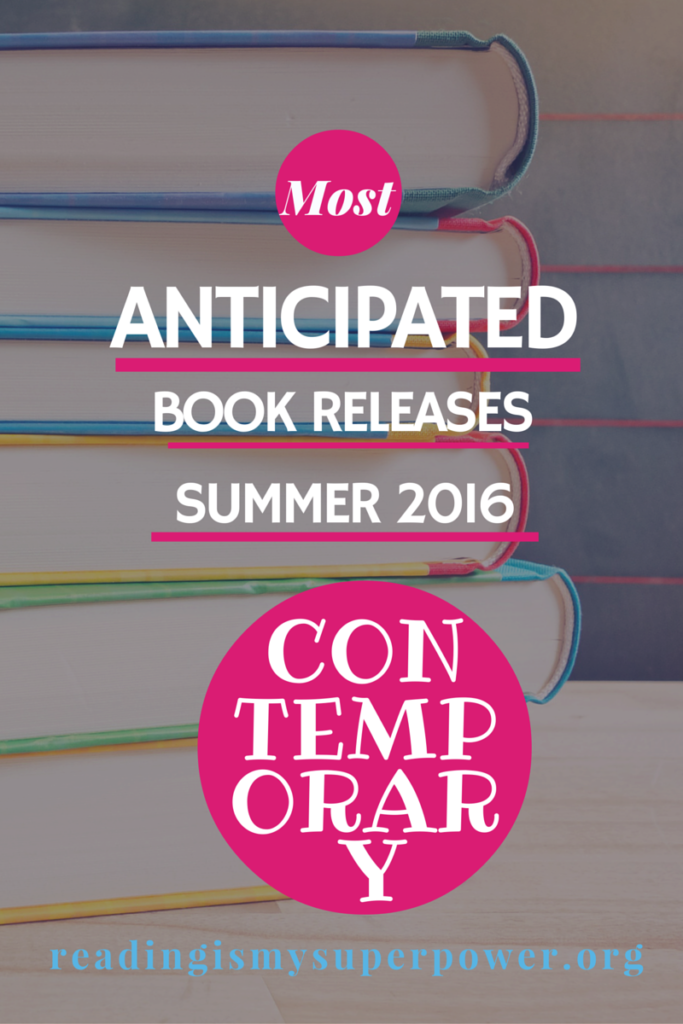 This week I’m spotlighting my most anticipated books releasing this summer. Today I’m going to focus on contemporary fiction! Throughout the week, I will also be looking at historical, suspense, collections, and nonfiction. As always, I know I will inevitably (and unintentionally) omit a book from this list because there are so many great books coming out in the next few months that it’s hard to keep up with them all! I foresee hours upon hours of delightful reading on the horizon 🙂 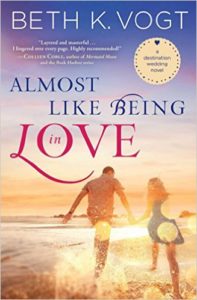 Almost Like Being in Love by Beth K. Vogt (Howard Books, June 28) – Winning an all-expenses paid Colorado destination wedding might seem like a dream come true for some people—but Caron Hollister and her boyfriend Alex Madison aren’t even engaged. Being “perfect for one another” seems like the absolute best reason to get married. But what if their supposedly faultless relationship is merely a safe place to protect his secrets and a way to keep their families happy? Kade Webster just landed the biggest deal of his life with his company, Webster Select Realty, participating in the Colorado Springs Tour of Homes. He never imagined he would run into the woman who broke his heart—Caron Hollister—right when his career is taking off. When Kade learns his home stager won’t be able to help with the Tour of Homes, he vaults past all the reasons he should stay away from Caron, and offers her a temporary job helping him on the project. Spending time with Kade has Caron questioning everything. The man intrigues her—at times infuriates her—and reminds her of what she lost. How can Caron say “I do” to one man when she’s wondering “what if?” about another?  Goodreads | Amazon 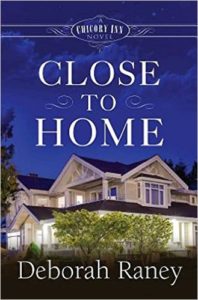 Close to Home by Deborah Raney (Abingdon Press, June 7) – Bree Cordel Whitman is a Whitman by marriage, but sometimes she forgets she wasn’t born into Grant and Audrey’s family. Her late husband, Timothy Whitman, gave his life for his country on a windblown hill in Afghanistan. Bree has let the love of Tim’s family keep her ties to him strong—in the same way she keeps Tim’s memory alive for them. But it’s been almost five years, and she can’t hang onto the past forever.

Fighting the guilt she feels for wanting to love again, she can’t help her dreams about a tall, dark, and handsome man—a man who is not her Tim. How can she accept the flirtations from Drew Brooks without throwing the Whitman family back into grieving? And how can Drew compete with the ghost of a hero and the hero’s very alive family who seem to hold some spell over the woman who shares their name . . . a woman he might just love?  Goodreads | Amazon 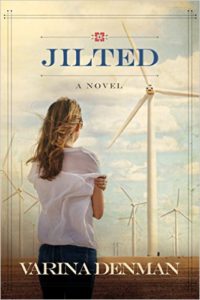 Jilted by Varina Denman (David C. Cook, June 1) – Lynda Turner has struggled with depression since her husband abandoned her and their young daughter fifteen years ago. Yet unexpected hope awakens when a local ex-convict shows interest. As long-hidden secrets resurface, Lynda must fight for her emotional stability and for a life where the shadow of shame is replaced by the light of love.

Jilted tells of a woman who has lost the joy of living, a man determined to draw her back toward happiness, and a town that must—once and for all—leave the past where it belongs. It is a gentle reminder that all things can work together for good.  Goodreads  | Amazon 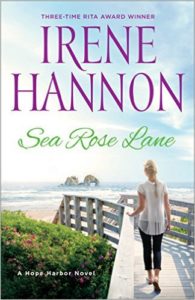 Sea Rose Lane by Irene Hannon (Revell, June 7) – After a devastating layoff, attorney Eric Nash heads back to the town where he grew up–only to discover that his childhood home is being transformed into a bed & breakfast. Instead of plotting his next career move in peace, he’s constantly distracted by noise, chaos–and BJ Stevens, the attractive but prickly blonde architect and construction chief who’s invaded the house with her motley crew.

As for BJ, her client’s son might be handsome, but after a disastrous romance, dating isn’t high on her agenda. Yet when they join forces to create a program for Hope Harbor seniors, might they also find healing, hope, and a new beginning themselves? 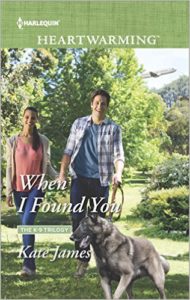 When I Found You by Kate James (Harlequin Heartwarming, July 1) – Is she part of the solution…or the problem?  It could be a terrorist threat. Or is it some other sinister plot?

An unprecedented rash of security breaches at San Diego’s international airport is putting passengers at risk and bringing the competence of the airport’s chief of security, Ariana Atkins, into question.

With explosives the weapon of choice, police K-9 unit captain Logan O’Connor and his bomb detection dog, Boomer, might be Ariana’s best, if not only, line of defense. Logan is certain his belief in Ariana, and his growing love for her, aren’t misplaced…but it wouldn’t be the first time he’s misjudged someone’s intentions.  Goodreads | Amazon 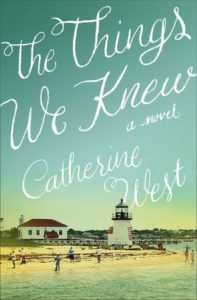 The Things We Knew by Catherine West (Thomas Nelson, July 12) – After her mother’s death twelve years ago, Lynette Carlisle watched her close-knit family unravel. One by one, her four older siblings left their Nantucket home and never returned. All seem to harbor animosity toward their father, silently blaming him for their mother’s death. Nobody will talk about that dreadful day, and Lynette can’t remember a bit of it.

But when next-door neighbor Nicholas Cooper returns to Nantucket, he brings the past with him. Once her brother’s best friend and Lynette’s first crush, Nick seems to hiding things from her. Lynette wonders what he knows about the day her mother died and hopes he might help her remember the things she can’t. But Nick has no intention of telling Lynette the truth. Besides the damage it might cause his own family, he doesn’t want to risk harming the fragile friendship between him and the woman he once thought of as a kid sister.

As their father’s failing health and financial concerns bring the Carlisle siblings home, secrets begin to surface—secrets that will either restore their shattered relationships or separate the siblings forever. But pulling up anchor on the past propels them into the perfect storm, powerful enough to make them question all they ever believed in.  Goodreads | Amazon 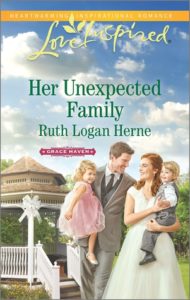 Her Unexpected Family by Ruth Logan Herne (Love Inspired, July 19) – Emily Gallagher and Grant McCarthy are planning a wedding together—just not their own. Emily’s well-structured life is turned upside-down when her company is hired to help Grant put together his deployed sister’s nuptials.

Because as Emily spends more time with Grant and his adorable twins, she can’t help but daydream about being at the altar herself. But Emily’s ex-beauty-queen status brings Grant memories of his children’s appearance-obsessed mother—a woman who walked out on their family.

For a future with Emily, can Grant escape the confines of his painful past? If he can, the next wedding they plan could be their own…  Goodreads | Amazon

I also saw that Julie Lessman has the next book in her Isle of Hope series – Everlasting Love – slated to release in July too. No cover art or summary yet but that one is FOR SURE on my TBR list, no matter what it looks like or what it’s about lol. Because… Julie Lessman. 😉 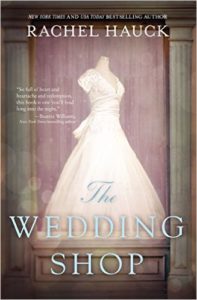 The Wedding Shop by Rachel Hauck (Zondervan, August 16) – It’s the early 1930s, but Cora Scott is walking in stride as a career woman ?after having inherited her great aunt’s wedding shop in Heart’s Bend, Tennessee, where brides come from as far away as Birmingham to experience her famed bridal treatment. Meanwhile, Cora is counting down the days until her own true love returns from the river to make her his bride. But days turn into months and months to years. All the while, Birch Good continues to woo Cora and try to show her that while he is solid and dependable, he can sweep her off her feet.

More than eighty years later, former Air Force Captain Haley Morgan has returned home to Heart’s Bend after finishing her commitment to military service. After the devastating death of her best friend, Tammy, and discovering the truth about the man she loved, Haley is searching for her place in life.

When Haley decides to reopen the romantic but abandoned wedding shop where she and Tammy played and dreamed as children, she begins a journey of courage, mystery, and love.  As Cora’s and Haley’s stories intertwine through time in the shadow of the beloved wedding shop, they both discover the power of their own dreams and the magic of everyday love.  Goodreads  | Amazon 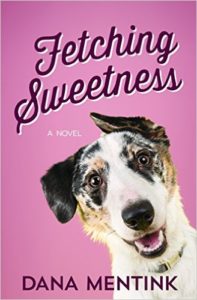 Fetching Sweetness by Dana Mentink (Harvest House, August 1/July 26) – It should have been so simple for Stephanie Pink: Meet up with Agnes Wharton in a small town in California, retrieve the reclusive author’s valuable new manuscript, and be promoted to a full-fledged literary agent. But Agnes’s canine companion, Sweetness, decides to make a break for it before Stephanie can claim her prize. Until Agnes has Sweetness safely back at home in Eagle Cliff, Washington, Stephanie will never set eyes on the manuscript she needs to make her dreams come true.

When Stephanie tracks the runaway mutt to a campground, she meets Rhett Hastings—a man also on the run from a different life and a costly mistake. Rhett agrees to help Stephanie search for the missing dog…thus launching a surprising string of adventures and misadventures.

Once Sweetness gets added to the mix, it’s a recipe for love and loss, merriment and mayhem, fun and faith in the backwoods of the Pacific Northwest.  Goodreads | Amazon

What about you? What contemporary releases are you most excited about this summer?