I am delighted today to give y’all a peek into a fantastic romantic suspense series by Amy Leigh Simpson! I haven’t had time to officially review them yet but I didn’t want my lack of hours in a day to keep you from finding out about these books!! 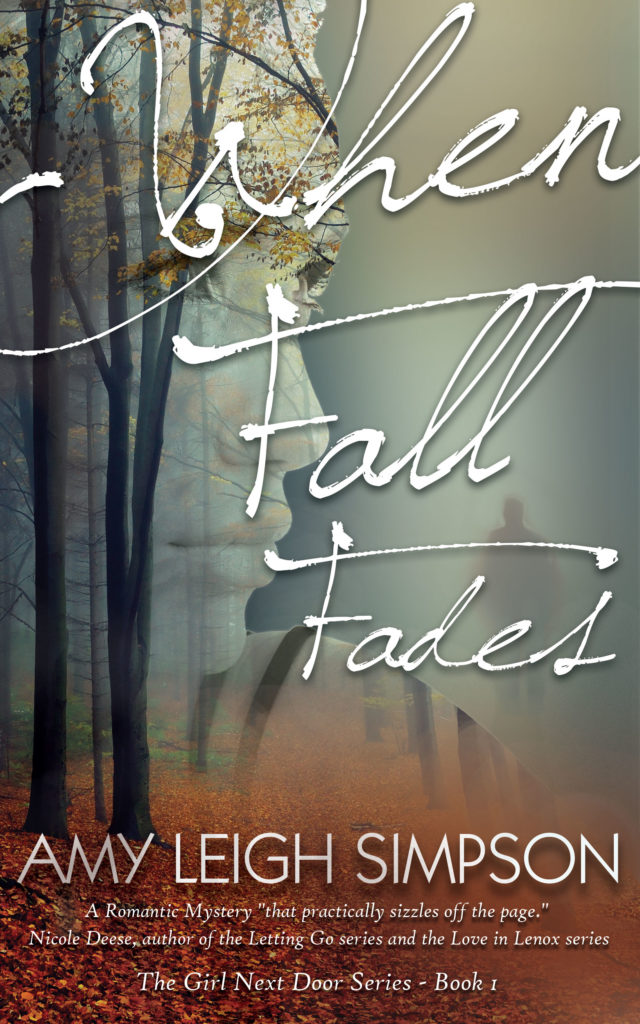 The first novel in the series, When Fall Fades, was named one of the USA Today HEA Must Read Romances of 2015! In fact, Serena Chase from USA Today’s Happy Ever After website added, “Wowza! A fresh new voice on the clean-with-steam romance scene … Sassy and nervy, her debut is an engrossing read that shines with the promise of a developing talent you’ll want to be on the ground floor of experiencing.“  Pepper Basham (a familiar name to anyone who frequents this blog) called Amy Leigh Simpson’s debut “unique and intense” and said, “Simpson’s descriptions, emotionally-riveting details, and sometimes evocative scenes keep the reader breathless from the first page to the last. A wonderful debut!” Nicole Deese (another author featured in the Readers Appreciation Giveaway I hosted in May) called When Fall Fades a romantic mystery that “practically sizzles off the page!“

Are you thinking what I’m thinking? A possible contender for the next KissingBooks 101 post! 😀

The second book in Amy Leigh Simpson’s The Girl Next Door series, From Winter’s Ashes, released just last week – June 7th – and is already getting rave reviews! (So far, all the reviews on Goodreads are FIVE STARS!) 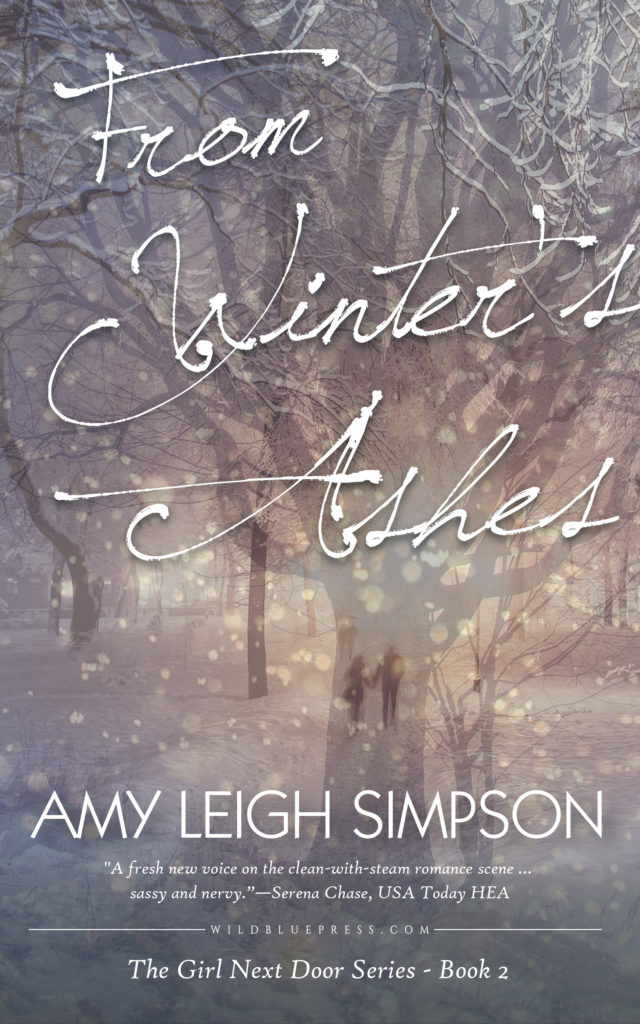 If you can trust your enemy with your life, what’s to stop him from stealing your heart?

Hopelessly unlucky in love and a target for tragedy, Joselyn Whyte hardly leads the charmed life you’d expect of an heiress. When she becomes the mark of an arsonist, the last person she expects to ride to her rescue is her nemesis—the man who sealed her fate as a frigid and lonely “Snow Whyte.”

Firefighter Finn Carson might talk a big game, but behind the swagger and the dimples is a man tormented by a mistake that cost a life. When a force stronger than his stubbornness pulls him off the bench and into a 5-Alarm fire for a miraculous save, Finn decides the key to his redemption lies with the Ice Princess he loathes. But the price to freedom from the guilt and nightmares might be too steep if it means bartering with Joselyn’s father by posing as her boyfriend—her safety and the ruthless billionaire’s Senatorial campaign hanging on the combustible edge of a decade old grudge.

When secrets from the past resurface, the ruse and reality collide and threaten to thaw their heated rivalry—turning hate into something that terrifies them even more than the cunning predator with a bent sense of justice.

My two favorite aspects of Amy’s writing, which both shine equally in this story, are her scenes of outrageous banter between her hero and heroine, and her clear, poignant, and unique ability to bring words to life on a page. Her descriptions explode with a clarity and vibrancy which immediately captures attention and leaves the reader almost breathless for more. From Winter’s Ashes is a strong combination of both spicy romance and gripping suspense in a tender journey toward healing. – Pepper D. Basham, author

If you’re looking for a sit on the edge of your seat, don’t turn out the lights and don’t go to sleep until the last page is turned read this summer, From Winter’s Ashes is it! Wonderful characters with real hurts to overcome, romantic tension, intrigue, yikes moments and everything in between, Simpson has created another delicious novel that will sweep you away and hold you captive until the very end. Don’t miss this one! – Catherine West, author

“He’s going to have a whole story about our relationship to the press before they get a chance to interpret it for themselves. Then, you and I are going to be spied on to confirm the slew of lies he fed to them. Which means that we will actually have to spend time together and act like a couple, or my dad will have both of our heads.”

If steam could shoot from a person’s ears, Finn would be witnessing the phenomenon at this very moment. She did still smell faintly like a bonfire. Who knew the ice princess could get so steamed? Finn wrestled down a chuckle of sudden amusement when he pictured Joselyn’s face a sickly shade of green as she chanted, “I’m melting.” And since she hadn’t slapped him, he figured he’d done an adequate job pretending to follow her rant instead of picturing her as the Wicked Witch.

“Dysfunction, arson, murderers, that stuff won’t fly, and he’s got enough muscle to make sure it stays hidden, for now. Nothing sells like a squeaky clean, happy family free of …”

His mind raced a 10K around her rambling thoughts as the situation weighed in. Okay. This was bad. It was obvious she needed a protector of sorts at her side, but was he really up for the job?

The chief had ordered Finn on a mandatory two-week sabbatical to clear his head and recuperate. He hadn’t taken any time off in the last two years, and even after the Monroe incident four months ago, he’d worked himself into the ground, refusing time away from the station. Punishing himself.

“Finn, are you even listening?” She rammed her fingers through her silky tresses and heaved her exasperation. “Look, you don’t like me.”

“Nope.” He fought with every word scrambling in his head, yet this one rose to the surface with certainty.

“Perfect! I don’t like you either, so on this we agree. What I don’t understand—”

“Can you shut your trap for one second so I can say something?” His voice snapped more than he’d intended, and he saw her flinch.

Her teeth scraped across the corner of her pouty bottom lip. Then she crossed her arms and waited.

He glanced around, and shaved the harsh edge off his tone. “Listen … I guess we’re going to have to grin and bear it. But I certainly don’t have to justify my reasons to you.” He lowered his gaze to where the soft flesh of her lip surrendered from her bite, inexplicably frozen there. A blush of the palest pink stole back into the tortured petal of skin, and he could almost hear the pulsation that fluttered at her throat. She swallowed hard. Finn followed suit, forcing a swig of oxygen through his suddenly parched airway.

“There’s a killer on the loose, and like it or not, your life is in my strong and capable hands.”

She rolled her eyes.

“Now, let’s kiss and make up and get this show on the road.” He threw in a wink, just to tick her off.

“Ha! Right!” In a huff she turned and took on a fitful strut back toward her room.

Man, she riled easily. This is gonna be more fun than I thought.

“I know you are very proud of your assets, but doll, this is a public place, and you know I don’t like to share. Perhaps you should cover up, save that for daddy for later.” He bounced his eyebrows for effect.

Sheer mortification splashed across her face before she jerked at her gaping hospital gown and ducked into her room.

Ladies and Gentlemen: Round one, goes to Finn Carson.

WHEW! I can see this book will require the fan, the fainting couch, the freezer, the alternate supply of oxygen, etc. Plus the riveting suspense??!!!?? Cannot WAIT to read it! 😀 Fairly safe to say this one will end up on a future KissingBooks 101 post too… stay tuned. 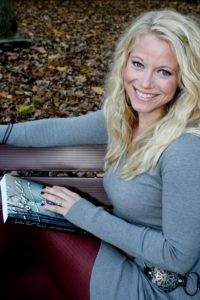 Amy Leigh Simpson, acclaimed author of When Fall Fades, writes romantic mysteries with honesty and humor, sweetness and spice, and gritty reality covered by grace. When she’s not juggling three tow-headed tots and a bottomless cup of coffee, she’s entertaining a head full of swoony story ideas inspired by her own hero. Her Sports Medicine degree is wasted patching up daily boo boo’s, but whatever is left usually becomes fodder for fluttering hearts, blood and guts, and scars that lead to happily ever after.

What about you? What intrigues you about From Winter’s Ashes or its predecessor, When Fall Fades?