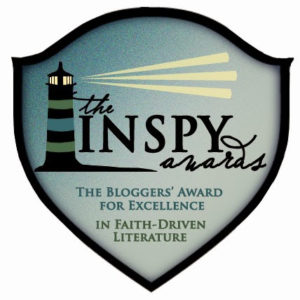 I was so honored to be one of the judges for this year’s Inspy Awards! Bloggers & readers drove the long list nominations, and the advisory board selected the short list. At that point, we judges (all bloggers/reviewers) set out to determine the winner in our respective categories.  Months of reading, much dialogue, many emails later – here are the winners of the 2016 Inspy Awards!

(Please visit the official announcement from the Inspy Advisory Board to read statements from the judges for each winner/category.)

A Love Like Ours (Bethany House) by Becky Wade

The Wonder of You (Tyndale House) by Susan May Warren

A Cup of Dust (Kregel) by Susie Finkbeiner

The Art of Losing Yourself (Waterbrook Press) by Katie Ganshert

Water From My Heart (Center Street) by Charles Martin

Not by Sight (Bethany House) by Kate Breslin

The Mistress of Tall Acre (Revell) by Laura Frantz

The Bones Will Speak (Thomas Nelson) by Carrie Stuart Parks

Shades of Doon (Blink) by Carey Corp and Lorie Langdon

The Shock of Night (Bethany House) by Patrick W. Carr

The Curse of Crow Hollow (Thomas Nelson) by Billy Coffey

What about you? Which of the award winners have you already read? Which are still on your TBR?