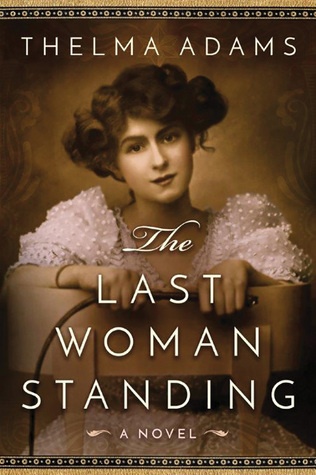 Two decades after the Civil War, Josephine Marcus, the teenage daughter of Jewish immigrants, is lured west with the promise of marriage to Johnny Behan, one of Arizona’s famous lawmen. She leaves her San Francisco home to join Behan in Tombstone, Arizona, a magnet for miners (and outlaws) attracted by the silver boom. Though united by the glint of metal, Tombstone is plagued by divided loyalties: between Confederates and Unionists, Lincoln Republicans and Democrats.

But when the silver-tongued Behan proves unreliable, it is legendary frontiersman Wyatt Earp who emerges as Josephine’s match. As the couple’s romance sparks, Behan’s jealousy ignites a rivalry destined for the history books…

At once an epic account of an improbable romance and a retelling of an iconic American tale, The Last Woman Standing recalls the famed gunfight at the O.K. Corral through the eyes of a spunky heroine who sought her happy ending in a lawless outpost—with a fierce will and an unflagging spirit.

The Last Woman Standing is gritty and blunt and paints a decidedly unromantic (probably more realistic) picture of the Wild West.  Told from Josie’s perspective, almost as though she dictated her memoir to Thelma Adams, the narrative has a casual and easy cadence and I enjoyed the style of the writing voice. It felt like we were sitting down for a conversation and that’s my favorite kind of first person narrative.

The problem with the narrative being from Josie’s perspective is that Josie can be (is often) coarse and crude. In fact, I almost stopped reading after the first couple of chapters because her frankness and vulgarity was just too much for me. However, I gave it one more chapter since I’d committed to this review for a blog tour and the crudeness did lessen considerably so I decided to keep reading.

This kind of historical fiction brings to life in new ways the people we’ve read about in textbooks and/or watched in documentaries & movies. It gives them a different sort of humanity and always creates in me the urge to delve into further research like the history nerd that I am. I want to know more about Wyatt Earp and his brothers now after reading this book – they seem like the best sort of rogues. I also want to find out more about Johnny’s son Albert.

Sadly though, I didn’t connect with Josie. She’s extremely focused on her own beauty and sexuality (though I did love seeing her with Albert, in that softer selfless motherly role) and at the same time very naive. It’s like she wants the best of both worlds – innocence and experience – but for a good portion of the book she only winds up with the worst of each. I expected Josie’s story to be one where she fought for her own independence, a strong heroine who balked against the roles that society ordained for her. While there’s a smidgen of that element to Josie’s story, she really just goes from one man to another, and I never saw much spirit or fire in her except at the very beginning (and then that was too crude for me to enjoy).

Bottom Line: The Last Woman Standing will appeal to fans of the Wild West, especially anyone who loves the movie Tombstone. I wouldn’t recommend it, however, to anyone who is easily offended. As I said already, it’s blunt and uncomfortable.  It will certainly give you a new perspective on the events at the OK Corral and on the players involved, but it’s not a pretty perspective. Like the dust on the streets of Tombstone, this book and its characters are gritty. Read at your own risk 🙂

My Rating: 3 stars / I enjoyed the writing style but didn’t connect with the character or her crudeness.


Reviewer’s Note: To my readers who prefer “clean fiction”,  please be aware that there is frequent profanity (particularly at the beginning) as well as frank speech and scenes of an intimate nature.

Thelma Adams is an established figure in the entertainment industry. For two decades, she has penned celebrity features and criticism for high-profile publications. Her portfolio of actor interviews includes Julianne Moore, George Clooney, Jessica Chastain, and Matthew McConaughey, among many others. While covering film for the New York Post, Us Weekly, and Yahoo Movies, Thelma became a regular at film festivals from Berlin to Dubai, Toronto to Tribeca. She sits on the Hamptons International Film Festival Advisory Board and twice chaired the prestigious New York Film Critics Circle. Her debut novel, Playdate, published by Thomas Dunne Books, won high critical acclaim. Adams is often recognized, as she has been invited to share her expertise on many broadcast outlets, including appearances on NBC’s Today, CBS’s Early Show, and CNN. She graduated Phi Beta Kappa with a history degree from UC Berkeley and earned an MFA from Columbia University. She lives in Hyde Park, New York, with her family.

Visit the TLC tour page to see other stops & giveaways!

My brother & SIL are in the middle of car buyer’s nightmare with a dealership that uses fraudulent practices. Check out their story & don’t buy from @platinumusedcars if you live in the ATL area. #Repost @joshuadbooth with @make_repost
Look mom! No masks ☺️ First mask free visit with my parents since we moved here. Thankful for vaccines & better immune systems!
Got our coffee table (made by my dad) ready to sub as a game table for our family! (including the games-loving other Schmidts - have we mentioned how EXCITED we are that they are moving here?) Can’t wait for family fun again 🥰 #vaccinationdone✔️ #familygamenight #welovegames
#Repost @erinbartelswrites with @make_repost