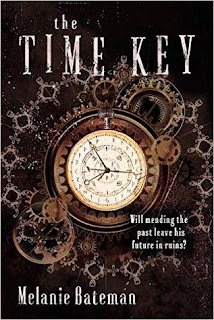 Genre: Adult, Fantasy, Fiction, Historical, Mystery, Sci-Fi, Suspense
Publisher: Sweetwater Books, an imprint of Cedar Fort
Publication date: June 14, 2016
Number of pages: 320
When Stanley saves a man, he’s given a mysterious device that allows him to travel through time. But he soon learns that changing his past doesn’t necessary lead to a better future. Traveling over 100 years into the future may be the only way Stanley can change his fate and save his family. 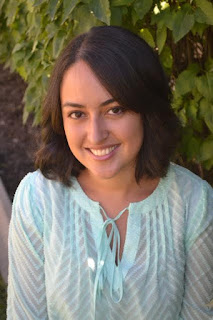 Melanie Bateman was born in Caracas, Venezuela, and moved to the United States at age nine. She has an associate’s degree in fine art from Utah Valley University, emphasizing in illustration. From a very young age she’s had a passion for drawing, specifically nature and the human figure. It is from this creative look on the world that she began to write stories.
GOODREADS | FACEBOOK | TWITTER | PINTEREST | AMAZON | WEBSITE

I could go on and on about the ideas that brought The Time Key to life, but I’ll try my best to avoid spoilers here!

1. The actual Time Key I designed after a timepiece necklace that my husband gave me as a gift our first year of marriage. I’ve always been fascinated by the idea of time travel, and that necklace was the first spark for me to really consider writing a story.

2. To keep the story respectful, the Roma Travelers are called just by that name in The Time Key, despite the research I did about real people living in Andalucía, Spain referring to themselves as gitanos. I have a great admiration for the culture, and some of the scenes included were inspired by this video (https://www.youtube.com/watch?v=Scus9teTdjo).

3. I chose the year 1897 as a reference to Henry James’ publication of What Maisie Knew that same year, as I borrowed the name for one of my characters. It’s a sad story, but so is Maisie’s.

4. Lena’s name, an unexpected character in The Time Key, was borrowed from H. G. Wells’ The Time Machine. The time traveler in that book has a little helper called Weena, and I thought a similar name would suit my own character.

5. I read a lot of Victorian literature while preparing to write The Time Key. When I kept returning to Sir Arthur Conan Doyle I decided to research his life. A lot of his beliefs reflected those of a lot of people at the time. I found that it was a time of massive progress, but in general people were still widely superstitious. Spiritualism was becoming popular at this point as well. Then I ran into the story of the Cottingley Fairies and read that the author readily believed that the photographed fairies were authentic. I had been toying with the idea of including fantasy elements in the story, and with my findings I wanted to bring that same innocent belief into The Time Key.

6. On that same note, Russell Gilmore was loosely based on how I saw Doyle. A physician, a tall man with a mustache, and a spiritualist, which might explain why he’s so accepting of all the mystical events and creatures in the story.

7. I throw in a few minor details that hint at other versions of our world. The “yo-yo” wasn’t called by that name until 1920’s in America when immigrant Pedro Flores started selling the toy under that name. So, where did Stanley hear “yo-yo” in 1897 England? He probably heard it from a traveling observer just passing by (you will get this reference in the book).

8. In this version of Kingston-upon-Thames, the market exists, same as ours, but the monument is different. The illustration is based on the Greek Goddess of war, on whom I based the goddess in this story. There’s a lot more lore to it, but that would be a spoiler!

9. While I searched for pictures about the WWII London Blitz in 1940, I saw that the area of Kingston had been affected by the bombings. The scene where Stanley sees a burning cathedral in ruins was one of the first scenes I wrote, which was based on that picture.

10. The idea of Rosie/Sibyl came to me as I was outlining the plot. I needed a “fixer” in a time traveling story, someone who knew secrets that Stanley needed to learn. Rosie’s abilities came together after I read The Time Traveler’s Wife, in which the main character has a similar “condition” to Rosie.

6 responses to “Book Spotlight (and a Giveaway!): The Time Key by Melanie Bateman”