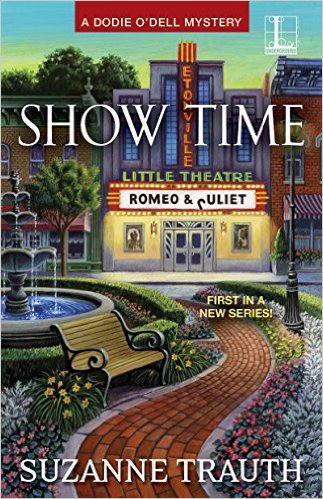 The tide has turned for Dodie O’Dell since a hurricane upended her life on the Jersey Shore. Now she’s further up the coast in sleepy Etonville, managing a restaurant that dishes dinners themed around the community theater’s latest productions. But Dodie just never imagined she’d land the starring role in a case of bloody homicide . . .

Intrigued by rumors of vanishing box office money, Dodie has agreed to help oversee the casting of Romeo and Juliet at the modest Etonville Little Theater. If nothing else, it’s a welcome escape from the thirty-something’s usual going-to-bed-with-a-mystery-novel routine. But when Jerome Angleton, a well-respected member of the theater company, is inexplicably found murdered on the loading dock, deadly drama transcends the stage—and the page. As a crime wave crashes over the small town, the spotlight is on Dodie to orchestrate her own investigation behind the scenes . . . before someone has a chance at a killer encore.

One of the things I love most about cozy mysteries is the small town full of quirky characters, and Show Time by Suzanne Trauth delivers this in abundance. Despite the fact that someone is murdered, there are plenty of opportunities for subtle humor, thanks mostly to these previously mentioned quirky characters.  I love books that make me chuckle, and this one does. Trauth does a great job writing banter, and I grinned through several dialogue exchanges. For instance, Edna and her overly dramatic police codes or …

“Walter is about to strangle Romeo.”

Walter gesticulated broadly, than climbed up and down the ladder to demonstrate how easily one could master the steps. Romeo was having none of it. His every gesture said, “No way.”

“Fear of rabbits?” I asked innocently.

Chief Bill Thompson makes a nice potential love interest for Dodie – subtly sexy and with a dry sense of humor that just makes you smile. The fact that he was so accommodating (well… sometimes) of her amateur sleuthing was a bit puzzling, but not enough to give me more than a few seconds’ pause.

Bottom Line: While Show Time does start out a bit slow in my opinion, it quickly settles into a comfortable pace and fans of cozy mysteries will be delighted at this new series and a new author to follow. Trauth’s theater background transfers quite organically into the book’s setting and strikes a good balance of enough detail to be realistic but not so much that you feel you’re reading a stage manager’s manual. The whodunit may be a bit obvious after a certain point but that doesn’t take away at all from the reader’s enjoyment.

Suzanne Trauth is a novelist, playwright, screenwriter, and a former university theatre professor. She is a member of Mystery Writers of America, Sisters in Crime, and the Dramatists Guild. When she is not writing, Suzanne coaches actors and serves as a celebrant performing wedding ceremonies. She lives in Woodland Park, New Jersey. Readers can visit her website at www.suzannetrauth.com.