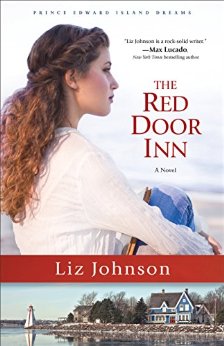 Marie Carrington is broke, desperate, and hoping to find sanctuary on Prince Edward Island while decorating a renovated bed-and-breakfast. Seth Sloane moved three thousand miles to help restore his uncle’s Victorian B and B–and to forget about the fiancée who broke his heart. He wasn’t expecting to have to babysit a woman with a taste for expensive antiques and a bewildering habit of jumping every time he brushes past her.

The only thing Marie and Seth agree on is that getting the Red Door Inn ready to open in just two months will take everything they’ve got–and they have to find a way to work together. In the process, they may find something infinitely sweeter than they ever imagined on this island of dreams.

“Understanding women is half poker game… and half prayer.”

Well…. I am extremely late to this party and now I regret my delinquency more than ever because oh how I enjoyed reading The Red Door Inn by Liz Johnson! 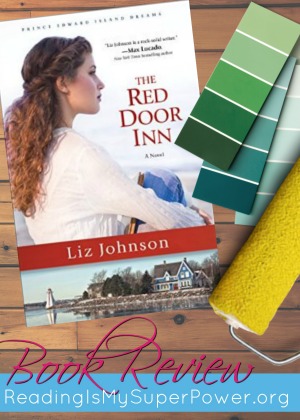 A setting already beloved by any little girl or young woman (or a woman approaching ancient age like me) who ever read Anne of Green Gables. A cast of secondary characters to make L.M. Montgomery proud. A romance that sparks with electricity and affection, even during the moments where you want to throttle one or both of them.

And then we have Marie, whom I wanted to hug from the moment I met her on the pages of The Red Door Inn. Just wrap my arms around her and hold on tight. I didn’t know why she was hurting yet, why she was having panic attacks, why she was buried so deep in a protective shell.  Johnson reveals Marie’s story in pieces as the novel progresses, allowing the reader to patch it together like a quilt until it’s finally all revealed. When I figured it out, I cried with her and wanted to hug her all over again. Like Caden’s reaction, “there weren’t words deep enough for one woman to say to another when she’d been broken like that.”

And then Jack, dear sweet Jack whom I also wanted to hug from the moment we met. He made me smile – for one reason or another – nearly every time he was on the page.  The father figure he became to Marie is one of my favorite aspects of The Red Door Inn. Not only because she needed to know what a loving father looked like, but because she needed to know what a loving God as Father looks like.  Her vision had been clouded by the only kind of father she’d known – so how could she see God any other way than as a Father who didn’t care?  This faith element of the story is written so tenderly and fits so naturally within the story that it never feels like a sermon or breaks up the flow of the plot. It’s just there, and it’s just really really sweet.

And Seth. Gruff, grumpy, prickly Seth with a chip on his shoulder and a grudge all over him. Just as Marie judges God based on her own father, Seth judges Marie based on his ex. While this of course makes him an absolute bear at first, it also makes for some grin-inducing scenes between the two of them as they each tentatively begin to trust the other. I adored the way both Jack and Seth brought out Marie’s quick wit and her confidence, as well as how Marie softened them both up quite a bit. Umm… and once Seth softens toward Marie a bit?!? BREAK OUT THE FANS. The typewriter scenes!!! The almost-kiss?!? The whisker burn?!?!? Aigh! Be still my swooning heart!!!

One last thing. Aretha Franklin. No relation to the singer. What a hoot! I love her!! And I love love love the subplot that involves her. Of course, I can’t forget to mention Caden who won my heart by not being stick thin (can I get an amen?!?) and her little niece Ruby, the Anne lookalike who has some very definite opinions about how and when to turn the hymnal pages 🙂

Bottom Line: Delightful characters (in case you couldn’t tell), warmth, affection, humor, tenderness, and a cozy setting make the perfect backdrop for Liz Johnson’s The Red Door Inn. The true meaning of friendship and family find their way beautifully into this story that on the surface appears to be a cute contemporary romance involving the restoration of an old inn but is really about so much more. It’s also about the restoration of faith, of hope, and of love, and all of these are woven into the novel’s framework in a way that adds so much dimension and depth.  Prince Edward Island is now on my bucket list of places to visit, but until I come into a large windfall of cash I will have to visit it vicariously through Liz Johnson’s newest series. Looking forward to book #2 in October!


KissingBook Level: 3.5 / You will for sure forget to breathe and a fan would not be remiss. 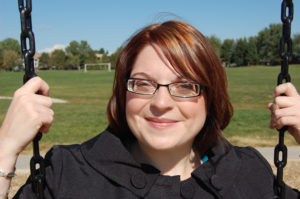 By day Liz Johnson is a marketing manager for a Christian publisher. By night she makes up her own love stories. She is the author of seven novels, a New York Times bestselling novella, and a handful of short Christmas stories. She’s also a two-time ACFW Carol Award finalist.

Liz is a graduate of Northern Arizona University in Flagstaff, where she earned a degree in public relations.

Now a resident of Nashville, she enjoys exploring local music, theater, and history of Middle Tennesee. She also takes every chance she can to visit Arizona to dote on her nieces and nephews. She writes stories filled with heart, humor, and happily ever afters.

Other Books by Liz Johnson

What about you? Where is a “bucket list” destination for you?