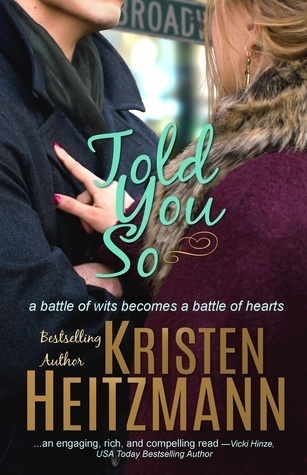 From the minute Grace Evangeline throws her sweet tea in Devin Bressard’s face, their battle of wits and cross-purposes overtakes their lives. Sassy “angelic” Grace Evangeline will stop at nothing to see her romance novel produced for Broadway. Devin Bressard knows all about the commercial success of Ms. Evangeline’s “novels”—as far from his literary, nerve-striking plays as anything could be.

Grace intends to pull his head out of the rarified air long enough to make her point, even if it involves stalking him and infiltrating his friends and colleagues. Devin knows she’s trouble, but who would guess the spokesperson for strength and virtue would be a calamity vortex? He mounts a fierce resistance, but when he’s forced to work with Grace, his profession and sanity aren’t the only things at risk.

“Words unsaid can change a course as surely as words said.”

Told You So is full of fabulous dialogue between the main characters – Grace and Devin. Every time they share a scene, their bickering steals the show. The back and forth is an expertly choreographed dance guaranteed to ramp up the romantic tension as well as keep a smile firmly on your face. You’ll definitely want to keep a fan handy too … and some facsimile of a fainting couch too. 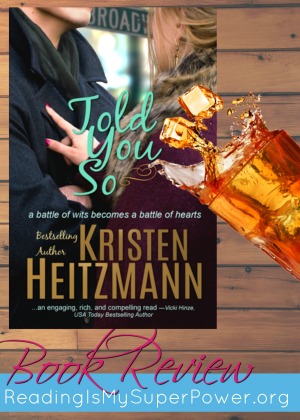 That’s the thing about Told You So though – it’s incredibly sexy but the kisses aren’t even really descriptive. The passion sizzles as much in what isn’t said as it does in what is.  Even the bordering-on-PG13 implications (necessary to the story) are written tastefully and redemptively but in such a way that the electricity between these two characters is tangible.

Which brings me to the characters themselves.

There is more to both of them than first meets the eye. To be honest, Grace kind of annoyed me at first. She’s cute, yes, and sweet. But she’s famous and she embraces the fame. And while she has a huge heart for other people, she also seemed a little stuck on the fame at times. Once I got to know her more, though, she grew on me. Her fantastic Southern sass, her genuine love for Jesus, her already-mentioned heart for others, and her authenticity when it mattered – these all won me over to Grace’s fan club. Now, Devin? He didn’t need to grow on me. He had me solidly in his corner from the beginning, thanks to his Darcy-ish tendencies. The more I learned about him, in layers, the more I loved him. I also knew that when he fell, he would fall hard. The delight came in watching Grace work her way into his heart and then watching her soften his soul.

And that is perhaps my favorite part of Told You So – the redemptive theme that takes your breath away.  It’s written as tastefully and subtly as the intimacies in the book, not something that requires you to pause the story for a sermon. But even in its subtlety, it packs an emotional wallop that will refresh your own soul if you allow it to do so. You see, I grew up like Grace – the good girl. The one who kept the rules, the ones at home and school and church. As I got older, I put myself under more and more pressure to hide my failures and maintain the image of a perfect Christian who never struggles with anything. And frankly? It was exhausting to keep up a pretense like that. In Told You So, I saw myself in Grace. Our sins weren’t the same, our consequences weren’t the same, but that doesn’t really matter. What matters is that she and I both experienced the soul-cleansing power of this:

…she’d waited for the wrath of God.  What she’d felt instead was mercy.

Bottom Line: Kristen Heitzmann’s first book in the Told You series is fun and romantic and full of grace. Not just her sassy catastrophe-prone heroine with a heart of gold and a diehard fan base. But the kind of grace that washes over you when you least expect it and most need it. The kind of grace that amazes and humbles and redeems. On top of it all, you are treated to an absolutely swoonworthy story and two characters that have enough electricity between them to power New York for at least a few days.  A cast of vivid supporting characters rounds out the mix, and while a couple of the subplots seemed unnecessary to me they did add dimension and drama to the story! If you enjoy Becky Wade, Pepper Basham, and/or Victoria Bylin, you should check out Told You So.


KissingBook Level: 4 / Break out those fans and fainting couches!


Reviewer’s Note: Heitzmann doesn’t shy away from real issues, real consequences, real life. As a result, there is a minor scattering of profanity (the same word about 5 times or so) as well as some situations typically limited to general market fiction. However, I have absolutely no problems recommending this for my Christian fiction readers as well as for my readers who wouldn’t be caught dead with Christian fiction 😉 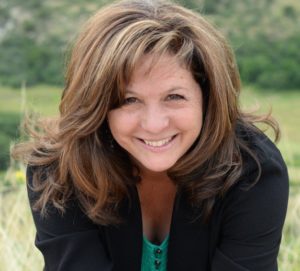 Other Books by Kristen Heitzmann

What about you? What are some of your favorite stories of redemption?

26 responses to “Book Review: Told You So by Kristen Heitzmann”