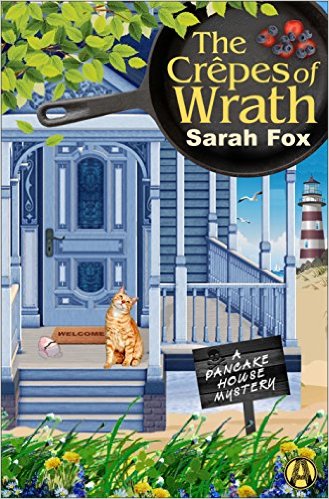 When Marley McKinney’s aging cousin, Jimmy, is hospitalized with pneumonia, she agrees to help run his pancake house while he recovers. With its rustic interior and syrupy scent, the Flip Side Pancake House is just as she pictured it—and the surly chef is a wizard with crêpes. Marley expects to spend a leisurely week or two in Wildwood Cove, the quaint, coastal community where she used to spend her summers, but then Cousin Jimmy is found murdered, sprawled on the rocks beneath a nearby cliff.

After she stumbles across evidence of stolen goods in Jimmy’s workshop, Marley is determined to find out what’s really going on in the not-so-quiet town of Wildwood Cove. With help from her childhood crush and her adopted cat, Flapjack, Marley sinks her teeth into the investigation. But if she’s not careful, she’s going to get burned by a killer who’s only interested in serving up trouble. 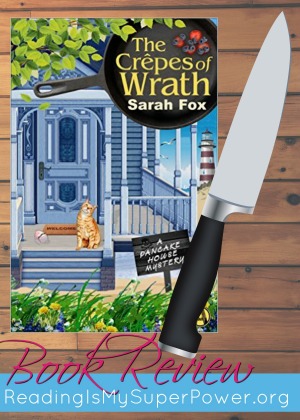 The Crepes of Wrath introduces us to the Flip Side Pancake House (isn’t that a fun name for a restaurant?) and the small coastal town of Wildwood Cove, as well as a bevy of main and minor characters.  As this is the start of the series, I am curious to see how some of the more vivid characters will come into the spotlight in future books – particularly the gruff chef Ivan who I know has a good story in him. And, of course, you know I have my eye on the budding romance between Marley and Brett…

The mystery is well-plotted and kept me guessing. Typical to cozies, the town is full of potential murderers and every time I thought I had it figured out someone else did something suspicious. Does anyone else find it amusing that we fans of cozy mysteries LOVE the small towns and their quirky inhabitants … yet … if we actually lived there we would probably be terrified to come out of our houses.  Because let’s face it. We can’t trust anyone. And forget owning your own business – a death sentence in cozy mystery towns. 😉

While the plot was well-constructed, it did slow a bit in several places to allow for Marley’s lengthy bouts of introspection. Which I guess she’s allowed after her cousin died but sometimes it felt as though we were just rehashing the same emotions. And though I appreciated that she was a fairly realistic amateur sleuth, there were moments when I wanted to holler at the book, “THAT WAS IMPORTANT! CALL THE SHERIFF!!” Ok… and also – the sheriff? Needs to answer his phone more when she does get around to calling. I’m just sayin. I hollered at him too, in case you were wondering.

Bottom Line: The Crepes of Wrath by Sarah Fox is cute, action-packed, and engaging. While the main character is quite likable, her actions don’t always make sense and her introspection gets a bit repetitive. Still, the town of Wildwood Cove contains a mix of characters who keep the interest level — and the suspect list high. The setting sounds absolutely gorgeous and the author’s descriptions from scene to scene make me wish i had the time and money to plan a vacation in Puget Sound. I am looking forward to the next book which I believe comes out in March, and I especially want to know more about Ivan as the series progresses. 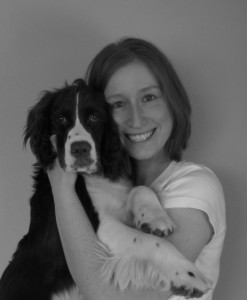 Sarah Fox was born and raised in Vancouver, British Columbia, where she developed a love for mysteries at a young age. When not writing novels or working as a legal writer, she is often reading her way through a stack of books or spending time outdoors with her English Springer Spaniel.

Other Books by Sarah Fox

Follow along with the tour at Great Escapes by clicking on the button below!

What about you? What was the last book which found you talking/yelling at the characters?

9 responses to “Book Review: The Crêpes of Wrath by Sarah Fox”