June Hamilton left home to pursue her dream of dancing on Broadway. Seven years later, she has one regret: Mel Preston, her teenage crush and onetime summer love. Now a single dad and the head of maintenance at Starlight Point, her family’s amusement park, Mel’s easy smile still makes her heart beat in triple time. But June came home with a plan. She would spend the summer revitalizing the park’s aging theaters, then make a graceful exit back to the big city. Until Mel and his young son start making a powerful claim on her emotions, and June faces an impossible decision…

Everyone’s counting on him

With the sudden death of his father, Jack Hamilton finds himself running the family amusement park, Starlight Point. His first job? Balance the books, and that means raising the rent for vendors like baker Augusta Murphy.

Gus won’t accept the new contract…not without a fight. She rallies the other vendors and sets out to negotiate with Jack. At least, she tries. How do you play hardball with a man who’s charming and kind and still grieving? Gus needs to figure it out fast, because the closer she gets to Jack, the more she risks losing everything.

Carousel Nights is the second book in Amie Denman’s Starlight Point series but it can certainly be read as a stand alone. The sights, sounds, and excitement of an amusement park come alive as we fall in love with June and Mel. 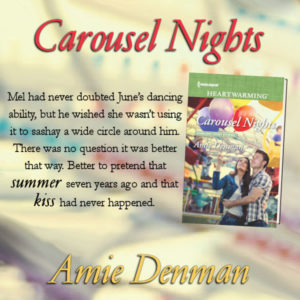 Mel is one of those characters we all get swoony over. He fixes things. He loves his son. He’s never gotten over June. He’s protective. SWOON. June is a dancer through and through – with a compassionate heart and a love for family. I had a more difficult time getting a feel for her personality beyond this, though.

One of my favorite parts of Carousel Nights is the friendship between Jack (June’s brother) and Mel. The author does a fantastic job, in my opinion, of capturing the way guys relate to each other – still guys without sounding like girls on the inside. (Y’all know what I mean… when a fictional hero gets all introspective with another guy in a book – about his relationship with the heroine – and you know if your husband read that scene he would guffaw at how fictional it really is) In particular, I loved this scene where they “talk” about Mel’s relationship with June….

“Notice how I have carefully avoided grilling you about my sister.”

They exchanged a quick uncomfortable glance.

And after a (very) brief discussion that basically amounted to “I’m not going to ask you” and “I appreciate that”, Jack concludes his brotherly responsibilities with –

“Glad we talked about it.” 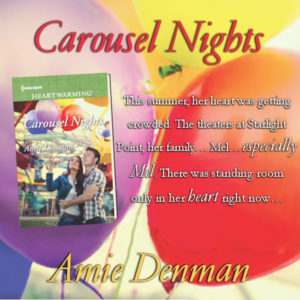 Bottom Line: Carousel Nights is fun and sweet and swoonworthy with some really great kisses and a really great setting. The chemistry between Mel and June is one that comes from years of knowing each other, from years of being in love, and yet it feels new and electric. The tension of running an amusement park – the crackle of the radio signaling another breakdown or emergency – keeps the action high and the pace steady. Readers will be torn between rooting for Mel and June and rooting for June to land the role of her dreams, and in that aspect they will instantly bond with June because she is pulled in the same directions. Bits of humor scattered throughout add to the fun of the amusement park setting, too.  A clean read that still sparks with passion, I have no problems recommending Carousel Nights to my blog followers who prefer Christian fiction, though this is a book written for the general market.

Amie Denman lives in Ohio with her husband, sons, cats, and dog. When she’s not reading or writing, she enjoys walking and playing outside. Born with an overdeveloped sense of curiosity, she’s been known to chase fire trucks on her bicycle just to see what’s going on. Amie believes that everything is fun: especially roller coasters, wedding cake, and falling in love.

10 copies of the first book in the series, Under the Boardwalk (print if US, ebook if outside the US)
Open internationally
Ends September 2nd

5 responses to “Book Review (and a Giveaway!): Carousel Nights by Amie Denman”