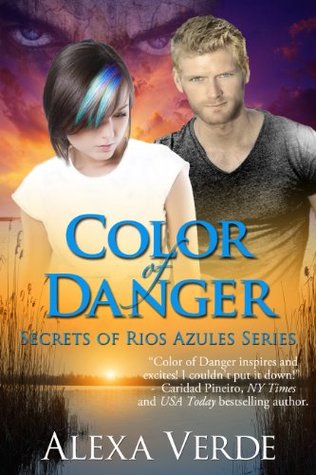 Former runaway Mari Del Lobo works hard to save her struggling restaurant and to trust people again. Dallas surgeon Dr. Luke Goodman turns her world upside down with terrifying news. A recent murder has her late brother’s – aka the Smiling Killer – signature and MO. When attacks on her escalate, Mari fights her growing attraction to the good doctor as fiercely as she fights for her life. To rescue herself and those she loves, will she be able to stop the murderer before he strikes again?

Luke couldn’t save his fiancée from the Smiling Killer, but he’ll do anything to prevent more murders, even ask help from the serial killer’s sister. Finding a kindred tortured soul and the perpetrator’s next target in Mari, Luke is determined to protect the stubborn ex-rebel. But Mari would rather face danger than risk the safety of the man she comes to love.

“Life in the sleepy small town of Rios Azules in South Texas was not so calm and monotonous after all.”


Color of Danger is packed with suspense! It starts off with some pretty high-stakes tension and doesn’t let up for very long throughout the course of the novel.  There’s not a lot of action necessarily, but the suspense is set up more psychologically. As a reader I got to the point where I almost didn’t trust anyone and about the time I thought I had it figured out, the author threw me another curve. This not only kept the pace of the novel steady, it also kept me engaged throughout. 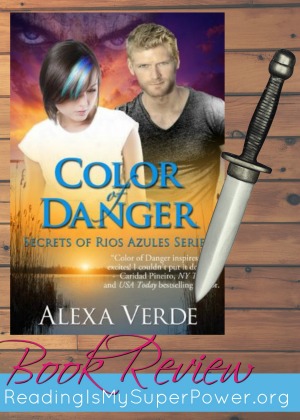 Mari is the kind of character that makes you smile – spunky, feisty, determined. She loves fiercely and refuses to let anyone put her into a certain mold or expectation. Luke is the yummy doctor who thinks he’s part-cop, but I’m not complaining because his protective instincts made him even yummier.

My one issue with Color of Danger is that I felt the characters could have been developed a bit more – emotionally, psychologically, spiritually, etc.  Some of their reactions/emotions seemed a bit one-dimensional or at least too glossed-over considering the situations they were in.  I couldn’t really connect with these characters because I never felt like I got inside their heads or their hearts during the novel.  However, I did really enjoy watching Mari journey closer to Jesus – her progress was very sweet and without pretense.

Bottom Line: If you want a nail-biter of a suspense novel with plenty of twists and turns, then you’ve come to the right place! While it’s true that some of the characters’ motives and reactions didn’t ring true for me and others fell flat, the romance is sweet and endearing and the friendships are inspiring. Again, the suspense held my attention nicely and kept me guessing through most of the novel. If you’re a fan of the TV show Criminal Minds, you need to add Color of Danger to your TBR list! 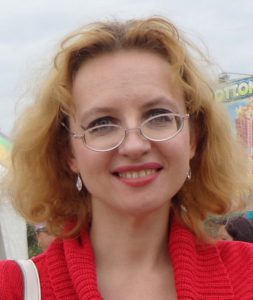 Alexa Verde writes sweet, wholesome books about faith, love, and murder. She penned her first literary masterpiece, a rhymed poem, at the ripe age of eight, and since has had 200 short stories, articles, and poems published in the five languages that she speaks. She has bachelor’s degrees in English and Spanish, a master’s in Russian, and enjoys writing about characters with diverse cultures. She can claim her 15 seconds of Amazon fame with her books climbing to the #1 spot in Hispanic American and #3 in Christian Mystery & Suspense. She’s worn the hats of reporter, teacher, translator, model (even one day counts!), caretaker, and secretary, but thinks that the writer’s hat suits her the best. After traveling the world and living in both hemispheres, she calls a small town in south Texas home. The latter is an inspiration for the fictional setting of her popular series Secrets of Rios Azules. For giveaways (for example, Russian souvenirs), news, and recipes, please sign up for her newsletter at www.alexaverde.com.

Thank you, Sandra, for having me on the CelebrateLit tour, and heartfelt thanks to all the bloggers who read and reviewed my novel Color of Danger. Every review, every kind word, every blog post matters tremendously to me. Very excited to be here!

In some ways, the first book is like the firstborn child. There is no feeling comparable to the one when your “baby” is born. While Color of Danger is not the first book I’ve written, it is the first book I’ve published, and I’ve done the latter with much apprehension and trepidation. But this was a story I needed to tell, about love, forgiveness, and perseverance in the face of adversity.

By then, my published works had ranged from senryu (Japanese poetry) to travel portraits to interviews, but it had taken me a while to find my voice in full-length books. However, once I realized I wanted to write Christian novels, I never veered off that road. I’m currently working on my first Christian contemporary romance, so my tagline might change. But for the Christian romantic suspense series, Secrets of Rios Azules, it is “Sweet, wholesome books about faith, love, and murder.”

I was told Mari was an unusual heroine. She’s tough, strong-willed, and fearless, and at the same time, vulnerable and hurt. Color of Danger is not just a combination of a Christian romance and a serial killer mystery. It is more than a story of friendship between “Danger Girls,” though Mari is loyal to a fault and would give up her life in a heartbeat for those she loves. First and foremost, it’s about believing in God again. And that’s what I strive for every one of my books to be.

A love letter to God.

Follow along with the Celebrate Lit Tour to see what others are saying!

21 responses to “Book Review (and a Giveaway!): Color of Danger by Alexa Verde”