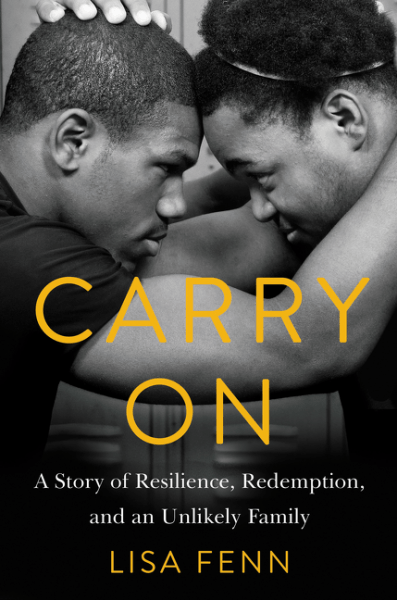 In the spirit of The Blind Side comes a deeply moving memoir about the unexpected bonds that wouldtransform three lives.

Lisa Fenn produced human-interest features for ESPN for over a decade, but one particular story came into her life and never left. After seeing a newspaper image of two young wrestlers from one of Cleveland’s tougher public high schools, Lisa followed a hunch and flew back to her hometown to meet the boys that very day. What she found caused her spirit both to sink and to soar.

Leroy Sutton, who lost his legs in a childhood train accident, could often be found riding on the back of Dartanyon Crockett, who was legally blind and had no permanent place to call home. Initially drawn together by their handicaps, the boys soon developed a brother-like bond. When one wrestled, the other sat on the edge of the mat, and their cheerful friendship was a source of inspiration throughout the halls of their high school.

As Lisa filmed her feature about this remarkable friendship for ESPN, she grew to understand the suffering Leroy and Dartanyon had endured, and she fought for their trust and their confidence. The three formed a surprising and meaningful connection—and once the television story ended, Lisa realized she couldn’t just walk away.

Though Leroy’s and Dartanyon’s futures were limited by abject poverty, Lisa resolved to give them the chance she knew they deserved. She worked tirelessly to see them through school and athletic pursuits, broken hearts, phantom limbs, and the bewildering obstacles that, at every turn, tested their individual strengths even while strengthening the bonds between them.

More than a story of two underdogs overcoming innumerable hardships, Carry On is a touching tale of an unlikely family forged through barriers of race, class, and disability. It is a powerful memoir about grit, love, hope, and faith—and the courage to carry on, even in the most extraordinary circumstances.

“There is nothing glorious about origins, especially when painfully disguised as endings.”

Carry On by Lisa Fenn is a nonfiction book, yes, but it reads like a story. And what a powerful and engaging story it is! I was struck by many things while reading it, but a few aspects in particular stood out.

The power of one – What I mean by this is that over and over again in the book it’s evident how life-changing one person can be for another. Coach McKinney is willing to take a bunch of boys – “each unsurpassed in their respective inabilities”,  all seven “uniformly horrible” – and attempt to make a wrestling team out of them in a school where they could only afford 2 pairs of wrestling shoes to share among all seven team members. Coach Robinson is the first “one” we encounter who started Dartanyon Crockett’s life going in a new direction, grabbing him out of the weight room one day in answer to a prodding from God and adding him to the wrestling team whether or not he was interested.  Dartanyon himself is “one” – carrying Leroy up the bleachers, holding him on his back when they all rose for the national anthem. And then there’s Lisa Fenn who set out to do a human interest story and became the “one” who stayed.

Friendship – This account, perhaps more than few others I’ve read, embodies the words of C.S. Lewis – “Friendship… is born at that moment when one man says to another, ‘What! You too? I thought that no one but myself…'” I mean, the whole team is this quote played out in real life. Just look at how Coach McKinney described them:

“Uno’s got some type of lung issue. Sifers is limping around like he’s been smoking Camels since the age of two. Christmas is in the corner sewing shoes and can’t take a bath.“

And then there’s Psycho, so dubbed because of the effect produced by his large Afro combined with an eye condition that made his eyes dart everywhere. Enter Dartanyon – who, it’s eventually (though not for a while) discovered, has the same condition as his cousin Psycho but is also legally blind. And then enter Leroy, who lost both his legs as a child.  Might as well. As Coach Robinson said, “We already got every kind of different on this team.” But because of their differences, this ragtag team of wrestlers found unity and friendship and a place to belong.

Faith & Resilience – While not the focus of Carry On, faith plays an important role. Both Lisa Fenn and Coach Robinson follow Jesus and while they don’t do so perfectly – any more than the rest of us do – their sensitivity to God’s promptings led to two disabled wrestlers becoming champions. Not just at wrestling, but at life. Through all its ups and downs. These are people who listened to that still, small voice and went against their own instincts – sometimes their better judgment – and made a difference that will be felt for generations.

“Robinson thought that if God could multiply five loaves and two fish, he might as well see what could be done with seven kids and two pairs of shoes.”

Not only is faith important to this story, but so is resilience. Here I sit, typing this review, in pain from my autoimmune stuff and flat worn out from a more active-than-normal day. I have to be honest … during physical therapy today, I wanted to quit the “Total Gym” part of the torture. I compare it to The Machine that leaves Wesley “mostly dead” in The Princess Bride. 😉 But Dartanyon and Leroy’s resilience in spite of obstacles way more debilitating and life-hampering than my pain inspired me to keep my mouth shut against a few whines that fought for release and to finish the whole set. A small victory and perhaps a trivial one but I don’t think I’ll be forgetting these courageous young men any time soon.

“I’m pretty sure God dropped you into me and Leroy’s lives for reasons other than television.”

Bottom Line: Full of humor and heart and life, Carry On is an inspiring story of two determined young men who forge a friendship against all odds… and a woman who gives them permission and strength to carry on. It’s not a safe story; rather, it’s one that will motivate you out of your comfort zone and across “perceived barriers of race and class” and disability. At times heartwrenching, it’s also an uplifting reminder that God sees and He cares and He never lets go…. and that more times than not He wants us to be His hand that extends to help someone up.

“They taught us about darkness and light and our ability to be the living difference between the two.”

Reviewer’s Note: There are a scattering of profanities throughout the book, as the author quotes key players in the story. The people in question come from rough backgrounds, from lives that have worn them down, and this language is part of their everyday vocabulary. However, it does not overpower the book, in my opinion.

A three-time winner of the Edward R. Murrow Award and a six-time Emmy Award—winning feature producer with ESPN for thirteen years, LISA FENN interviewed every big name in sports. Today she is a sought-after public presenter, speaking on leadership, poverty, and transracial adoption, in addition to her Christian faith and its relevance in both her media career and her daily life. Lisa received her BA in communications from Cornell University. Her work has been featured on ESPN,Good Morning America, and World News Tonight. She continues to produce sports stories and write about the redemptive power of love. Lisa resides in Boston with her husband and two young children.

What about you? Who has been a “one” in your life?

3 responses to “Book Review: Carry On by Lisa Fenn”