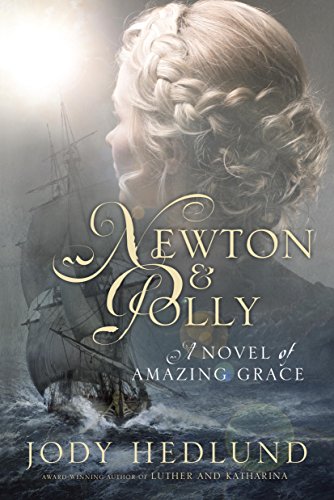 Amazing grace! How sweet the sound
that saved a wretch like me.
I once was lost, but now am found…

Now remembered as the author of the world’s most famous hymn, in the mid-eighteenth century as England and France stand on the brink of war, John Newton is a young sailor wandering aimlessly through life. His only duty is to report to his ship and avoid disgracing his father—until the night he hears Polly Catlett’s enchanting voice, caroling. He’s immediately smitten and determined to win her affection.

An intense connection quickly forms between the two, but John’s reckless spirit and disregard for the Christian life are concerns for the responsible, devout Polly. When an ill-fated stop at a tavern leaves John imprisoned and bound, Polly must choose to either stand by his side or walk out of his life forever. Will she forfeit her future for the man she loves?

Step back through the pages of history, to uncover the true love story behind a song that continues to stir the hearts and ignite the faith of millions around the globe.

“He hated his father. He hated God. Most of all he hated himself.”

My heart is so full right now. So full, in fact, some of it is spilling out of my eyes in the form of tears even as I sit here and try to figure out how I can possibly write a review worthy of the beauty of Newton & Polly. The truth is, I simply won’t be able to do it justice. 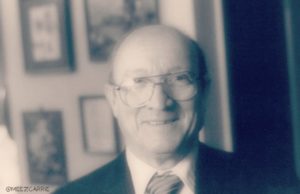 The beloved hymn “Amazing Grace” holds a tender place in my heart. To begin with, it was one of my grandfather’s most favorite hymns. I think my grandpa saw “Amazing Grace” as his anthem, in a way. You see, he was a bit of a prodigal who didn’t decide to follow Jesus until he was in his 40s, and the change in his life after Jesus redeemed him was – from what I’ve been told – remarkable and nearly instantaneous. So much so that he gave up his career as a CPA and moved his family (my mom, the youngest of two siblings, was in elementary school) from southern Illinois to Texas to enter seminary. He eventually returned to Illinois – this time much farther north – to pastor a new church plant … where he stayed for 25 years. After experiencing God’s amazing grace for himself, my grandpa never hesitated to tell others about it and led hundreds of people to a relationship with Jesus.

Another tender spot in my heart for “Amazing Grace” comes from more recent memories, specifically involving the friendships my husbands and I with internationals in our community. One evening, several of us were gathered to study the Bible together when someone suggested we sing. Most people there that night seemed to know “Amazing Grace” – though not all knew it in English. Even better. I can’t begin to describe to you the sweet grace present in that room that night as voices chimed in from around the room – all to a familiar tune but accented in different languages. Unity in Jesus. So beautiful. And if my grandpa had been alive on earth that night, he would have been singing the loudest (and most off-key) of us all, tears of gratitude streaming down his wrinkled cheeks and the light of Jesus alight in his smile. 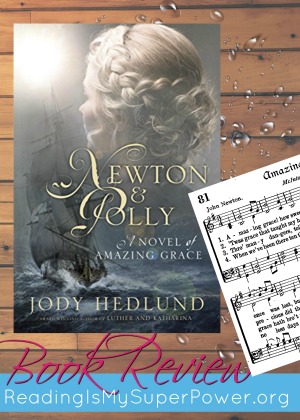 But you didn’t stop by to hear how sweet the sound of “Amazing Grace” is to me. You want to know what I think of Jody Hedlund’s latest novel, Newton & Polly.

Hedlund has a gift for bringing history to life on the pages of a novel, and in my opinion Newton & Polly is the best example yet. This is a story to savor, to linger over, to fully absorb. Yet, at the same time I found myself unable to put it down unless out of dire necessity and then only briefly. John Newton and Polly Catlett both leaped off the page at me right from the beginning, and I experienced the story through their eyes and emotions. I winced when Newton was beaten (the first time… the tenth time), and I felt my heart pitter-patter along with Polly’s as she fell in love. I laughed with them. I cried with them – and for them. And I must confess to “yay”-ing with a big grin over one kiss in particular 🙂

Newton & Polly – the title is vastly appropriate for the novel. Not only is it a breathlessly romantic – and at times heartwrenching – account of their love story but it is also a tapestry of how one person can have a life-changing impact. And in case you think I’m talking about Newton here, you’d be wrong. To be sure, he did go on to have a world-changing impact, eventually becoming a leader in England’s abolitionist movement despite (because of) his work in slave-trading.  But Polly Catlett’s story deserves much honor here. She has a large role in what eventually brings Newton to realize his need for grace and for God, though perhaps not in the way you might at first surmise. You’ll just have to read the book to see what I mean… 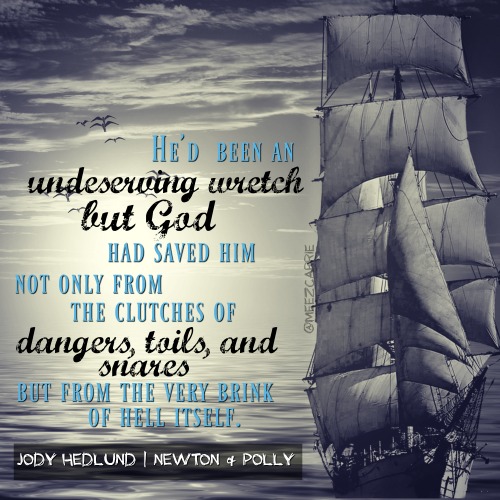 And Newton – his story is not to be discounted. To go from a man with such hatred in his heart for God and his father and anyone who dared to hold him accountable to become a man who penned some of the most famous and beloved words in Christianity – that, my friends, is the power of grace. And the proof of a God who is relentless in His pursuit of us, so deeply does He love us. I can’t wait for you to read this story for yourself to see the hand of God on Newton’s life even when Newton himself fiercely rejected God.

Bottom Line: Rich with history and romance, even richer with grace, Newton & Polly is not to be missed!  You will laugh and smile and swoon, to be sure, but you will also find your throat thick with tears more than once – sometimes at the tragedies that sin bestows, other times at the exquisite beauty of such amazing grace.  One thing I know for sure: You will never again sing Newton’s most familiar hymn without feeling a surge of thankfulness for God’s redemption of an undeserving wretch and for the way He used Polly Catlett to introduce Newton to the sweet sound of grace.

Jody Hedlund is a CBA best-selling and award-winning author of more than a dozen novels. Among a variethttps://readingismysuperpower.org/wp-admin/post-new.phpy of genres, she especially loves bringing long-forgotten women of history to life. She is the author of Luther and Katharina, which was awarded the ECPA Book of the Year Award in fiction. Her other novels have won the Carol Award, the INSPY Award, and the Christy Award. She lives in Michigan with her husband and their busy children.

What about you? Do you have a special memory involving the hymn “Amazing Grace”?