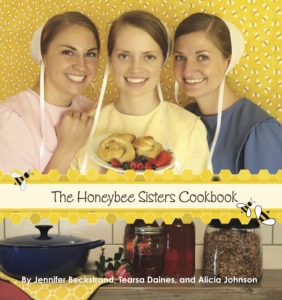 A collection of delicious honey recipes from the Honeybee Sisters book series, featuring quotes and recipes from Sweet as Honey, A Bee in her Bonnet, and Like a Bee to Honey–Amish romances by Jennifer Beckstrand.

Lily, Poppy, and Rose Christner, known as the Honeybee Sisters in their Amish community, are smart, inseparable, and all grown up. Orphaned when they were very young, the girls were raised by their eccentric Aunt Bitsy, who doesn’t behave like a proper Amish spinster. The Honeybee Sisters have blossomed into rare beauties, and the boys in the community have begun to take notice. But Aunt Bitsy is determined to scare off all comers with her brusque manner and her handy shotgun. None but the most worthy will make it past Bitsy’s defenses. It’s going to be a rowdy and romantic summer–harvesting honey from their many beehives and fighting off the boys right and left.

Note from Aunt Bitsy: When my girls told me they wanted to write a cookbook, I wasn’t too keen on the idea. Food attracts boys like honey attracts bees. I warned them that if they didn’t want the boys hanging around the house, they shouldn’t make the cakes and pies and cookies that are sure to bring them running. My nieces didn’t seem to be alarmed about the prospect of boys all over the place, so I suppose they’ll have to learn the hard way.

My problem is that smart, feisty, pretty girls attract boys even better than honey does. So even if my girls stopped cooking altogether, I have a sneaking suspicion that the boys would still find excuses to come over.

Some of the recipes in this book, like Honey Glazed Pretzels and Whole Wheat Bread, are very traditional Amish dishes. Others, like Salmon Tacos and Coconut Lime Chicken, are less traditional but still wunderbarr. I lived as an Englischer for twenty years before coming back to the Amish to raise my three nieces, and as a dental hygienist, I collected a lot of recipes.

Here’s my final warning: Boys are like stray cats. If you feed them, they’ll keep coming back. Buy this cookbook at your own risk. 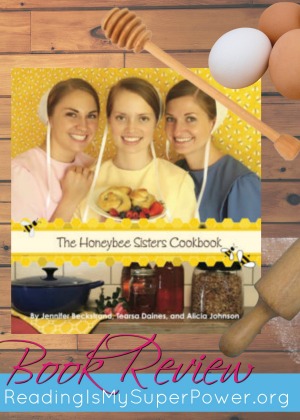 Reading is my superpower. Cooking is not. But I could not resist the opportunity to review The Honeybee Sisters Cookbook by Jennifer Beckstrand, Tearsa Daines, and Alicia Johnson. For starters, I adore the series from which the cookbook was born (I reviewed it for RTBookReviews, not on the blog – in case you start looking for it). Additionally, I wanted to see what kind of recipes were available with honey. I mean, really, how many could there possible be? lol.

This is such a cute cookbook!! I love the color photos and the quotes taken from the Honeybee Sisters book series (also by Jennifer Beckstrand). And who knew there were so many recipes to make with honey?!?

One of the first recipes I want to try is the Brown Sugar and Honey Muffins. Followed by the Beinenstich Cake. And then the Teriyaki Flank Steak and Honey Sweet Potatoes. The recipes are laid out in a very aesthetically pleasing way, easy to follow, and personally tested by the author.

Bottom Line: The Honeybee Sisters Cookbook is well designed and full of bright color photographs and mouth-watering recipes. The added quotes peppered throughout from The Honeybee Sisters books give the book an extra dose of whimsy and smiles. This would be a great Christmas gift, especially for anyone who has a sweet tooth for honey! 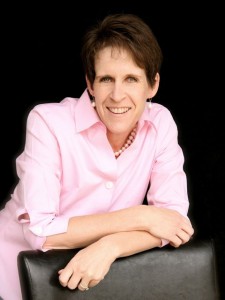 Jennifer has always been drawn to the strong faith and the enduring family ties of the Plain people and loves writing about the antics of Anna and Felty Helmuth. Jennifer has a degree in mathematics and a background in editing. She and her husband have been married for thirty years, and she has four daughters, two sons, and four adorable grandchildren, whom she spoils rotten.

Nothing brings family and friends together like a home-cooked meal. When I think of Amish food and cooking, I think of the way my mother used to cook and the way her mother cooked before her.

Both my parents grew up on farms, and hard work was a way of life. So were homemade meals and food that stuck to your ribs and gave you fuel for a hard day’s work in the fields. Cooking was more of an art than a burden, a way to sustain life, but also a labor of love for your family, day in and day out.

I joke with my husband that I have forgotten how to cook now that we’re empty nesters and I’d rather eat cold cereal that fire up the stove, but creating a nutritious meal for my family or baking a delicious dessert still brings me satisfaction and is a gift of the heart to my loved ones.

My father in-law, who was also raised on a farm, passed away very recently. His mother made him a bowl of oatmeal every morning, which he hated, and it would be waiting for him after school if he didn’t eat it at breakfast. In honor of him, I would like to share a rhubarb recipe. Rhubarb was one of his favorite treats.

This recipe is authentically Amish from my friend Priscilla Stoltzfus in Pennsylvania.

Pour rhubarb mixture into an 8×8 pan.

Pour the flour mixture over rhubarb mixture and bake at 350 degrees for 40 minutes or until a toothpick comes out clean.

Turn upside-down on a plate to serve. Serve warm, if you wish.

Reviewer’s Note: I’m pretty sure I’m going to have to make this recipe post-haste! YUM!

To celebrate her tour, Jennifer is giving away one set of The Honeybee Sisters Series! Enter below!

10 responses to “Book Review (and a Giveaway!): The Honeybee Sisters Cookbook by Jennifer Beckstrand”