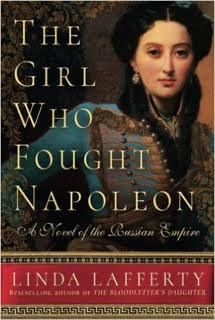 In a sweeping story straight out of Russian history, Tsar Alexander I and a courageous girl named Nadezhda Durova join forces against Napoleon.

It’s 1803, and an adolescent Nadya is determined not to follow in her overbearing Ukrainian mother’s footsteps. She’s a horsewoman, not a housewife. When Tsar Paul is assassinated in St. Petersburg and a reluctant and naive Alexander is crowned emperor, Nadya runs away from home and joins the Russian cavalry in the war against Napoleon. Disguised as a boy and riding her spirited stallion, Alcides, Nadya rises in the ranks, even as her father begs the tsar to find his daughter and send her home.

Both Nadya and Alexander defy expectations—she as a heroic fighter and he as a spiritual seeker—while the battles of Austerlitz, Friedland, Borodino, and Smolensk rage on.

In a captivating tale that brings Durova’s memoirs to life, from bloody battlefields to glittering palaces, two rebels dare to break free of their expected roles and discover themselves in the process.

“I can tell the story. But I think there are two stories to tell.”

The Girl Who Fought Napoleon is really a book divided between two stories. On the one hand, you have Nadezhda’s story – this brave girl who disguised herself as a boy and ran off to join the Russian cavalry in the fight against Napoleon. Her story is told from her perspective, in first person, and her voice is both compelling and haunting. The horrors of war, the harsh conditions of a military camp (especially for a female who can’t reveal she’s not a he), the bond between Nadezhda and her beloved horse… all will hold readers riveted with bated breath as we turn the pages, at once eager and dreading to learn her fate.


On the other hand, you have the story of Tsar Alexander, marketed from the back cover blurb as one who defied expectations like Nadezhda did. While she broke outside her role in life and became a brave warrior, he balked at the ruling position he was thrust into and became a spiritual seeker. However, even this isn’t really the story we end up with in his case. His narratives are third person, which admittedly distances us a bit from him after Nadezhda’s engaging first person accounts. But beyond that, the majority of his part of the book revolves around his open marriage – his affairs and his wife’s affairs… and him encouraging his wife to have affairs. And then him complaining about how he doesn’t want to be tsar. He visits a spiritual guide twice – and mentions to him that he is open to all things religious –  but that’s about the extent of the time given to Alexander as a spiritual seeker.

Bottom Line: I think I would have really liked this story if it had just been Nadezhda’s tale to tell.  Instead, I felt disconnected from both stories and never really warmed up to any of the characters. The history is incredibly interesting, and The Girl Who Fought Napoleon has left me wanting to know more about all of it.  But the book itself – as a story – just didn’t win me over. In fact, there are a couple of surprising twists at the end, including one that had me feeling a bit betrayed by the book, to be honest. So, maybe I’m still just grumpy about that lol but I have mixed feelings about the story as a whole.

(I received this book for free. No review was required, favorable or otherwise, and all views expressed are my own.)


Reviewer’s Note: This book has a very few mild curse words scattered throughout, and some intimate scenes that are more sensual than explicit. 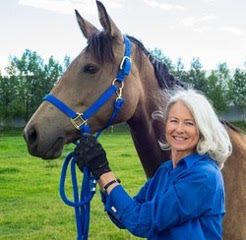 Linda Lafferty was a teacher for nearly three decades, in schools from Madrid, Spain, to Aspen, Colorado. She completed her PhD in bilingual special education and worked in that field; she also taught English as a second language and bilingual American history. Linda is the author of four previous novels—The Bloodletter’s Daughter, The Drowning Guard, House of Bathory, and The Shepherdess of Siena—all of which have been translated into several languages. The Drowning Guard won the Colorado Book Award for Historical Fiction. She lives in Colorado with her husband.

Other Books by Linda Lafferty

16 responses to “Book Review (plus a Giveaway!): The Girl Who Fought Napoleon by Linda Lafferty”