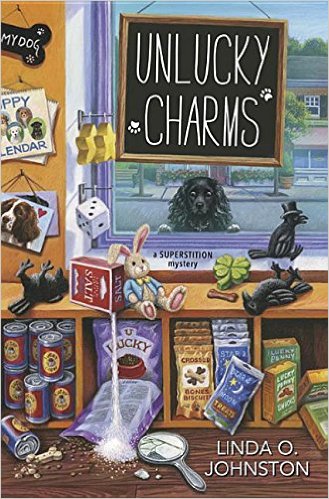 Rory Chasen, manager of the Lucky Dog Boutique in Destiny, California, hopes her new line of good-luck doggy toys will be a hit, especially the stuffed rabbits with extra-large feet. The timing of the line’s debut proves ill-fated, though, as several local shops―including Rory’s―are ransacked and vandalized with spilled salt and other unlucky charms.

The most likely culprit is disgruntled real estate agent Flora Curtival, whose issues with the town give her a motive. But when Flora is murdered and one of Rory’s toy rabbits is found with the body, Rory needs all the luck she can get while trying to determine just who killed the superstitious vandal.

Unlucky Charms is a cute cozy mystery set in the quirkiest of quirky towns! I’ve read some “cozy mysteries” lately that didn’t really fit the formula, but this one hit the spot and renewed my faith in the genre 🙂

The town of Destiny is built on superstitions, and all the businesses are named accordingly. For instance, the Broken Mirrors Bookstore or the HeadsUp Penny Gift Shop or the Lucky Dog Boutique (Zuzu’s personal fave).  I did find that this aspect of the book went a bit overboard – a little too much finger crossing and knocking on wood and watching for cracks in the sidewalk. I mean… at first it’s cute and quirky. But after the tenth reference to a superstition in so many pages (at least) or a silly phrase/gesture to ward them off, it grew more than a bit old. We get it. The town believes in superstitions to the point of holding informational seminars for tourists hoping to avoid bad luck during their stay…. we get that they’re being uber careful about everything.

But therein lies the rub. Because someone isn’t being uber careful. And this is the crux of the mystery. At least partially. Because the crime that takes up about a third of the book does not end up being the main crime under investigation after all. This allows the reader to truly invest in the story before the more major crime occurs;  it engages you in the town, the characters, the problem they’re having , etc. A unique technique employed successfully!

And let’s just talk about the romance for a minute. 🙂  Justin and Rory aren’t really supposed to be together much right now, thanks to the investigation, but Justin doesn’t really let that stop him.  He and Rory are a sweet couple and their kisses are ooh-la-la nice!

Bottom Line: Unlucky Charms is ideal for dog lovers, for mystery fans, and for anyone who loves a quirky small-town setting. The mystery is well-done (both of them!) and kept me guessing all the way to the end. And the romance adds just the right amount to the story without overpowering it. There are several occasions where the writing felt a little awkward – misplaced modifiers, etc – but overall this is a great choice for cozy mystery fans!

( I received this book for free. No review was required, favorable or otherwise, and all views expressed are my own.)


KissingBook Level: 3 / May forget to breathe


Reviewer’s Note: There are a very very few minor curse words scattered throughout this novel and the coy implication of intimate scenes but no details, explicit or otherwise. 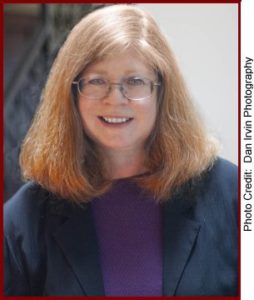 , a spinoff from her Kendra Ballantyne, Pet-Sitter mysteries

for Berkley Prime Crime, and Harlequin Romantic Suspense as well as the Alpha Force paranormal romance miniseries for Harlequin Nocturne.  She additionally writes the Superstition Mysteries

Follow along with the Great Escapes Tour (by clicking the badge below) for more chances to win!

What about you? Are there any superstitions that you find it difficult to give up?

7 responses to “Book Review (and a Giveaway!): Unlucky Charms by Linda O. Johnston”