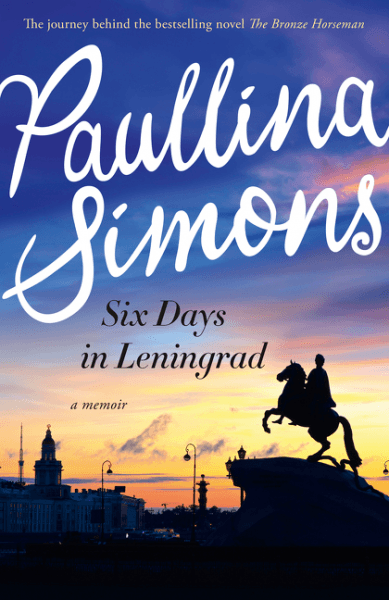 From the author of the celebrated, internationally bestselling The Bronze Horseman saga comes a glimpse into the private life of its much loved creator, and the real story behind the epic novels. Paullina Simons gives us a work of non-fiction as captivating and heart-wrenching as the lives of Tatiana and Alexander.

Only a few chapters into writing her first story set in Russia, her mother country, Paullina Simons travelled to Leningrad (now St Petersburg) with her beloved Papa. What began as a research trip turned into six days that forever changed her life, the course of her family, and the novel that became The Bronze Horseman. After a quarter-century away from her native land, Paullina and her father found a world trapped in yesteryear, with crumbling stucco buildings, entire families living in seven-square-metre communal apartments, and barren fields bombed so badly that nothing would grow there even fifty years later. And yet there were the spectacular white nights, the warm hospitality of family friends and, of course, the pelmeni and caviar.

At times poignant, at times inspiring and funny, this is both a fascinating glimpse into the inspiration behind the epic saga, and a touching story of a family’s history, a father and a daughter, and the fate of a nation.

Six Days in Leningrad is a (somewhat) fascinating look at the inspiration behind Paullina Simons’ book The Bronze Horseman. It’s a love letter to a country – and to a father.

I personally have never immigrated from one country to another – much less been back to that first country. But I have moved from my childhood home to one a few hundred miles away. And going back for a visit brought back so much nostalgia and emotion and … confusion. Was that house always so small? That climbing tree seemed a lot bigger when I was a kid. The yard seemed a lot more vast too. These are some of the feelings that Simons experiences when she returns to Leningrad for the first time since she moved to America as a child.


But accompanying these common-to-all-of-us emotions, Simons also faces disillusionment (Leningrad… Russia … have not changed. They are stuck in stagnation) as well as a growing awareness of what her life would have been like had her father not gotten them out of Russia when he did. And with that awareness comes a war within her own spirit – is she Russian? is she American? how to reconcile the two together?

Bottom Line: I found Six Days in Leningrad to be captivating in parts, while other sections of the book lost my interest. I was expecting less of an account of every detail of those six days in Leningrad and more of an overall summary of her experiences. Yet, the author frequently incorporates an abundance of superfluous details, mainly in relating conversations that don’t really move the memoir forward at all. And the bathroom breaks. I think I see what she was doing … the comparison between something so simple as a toilet in Russia vs a toilet in Texas … but reading about every toilet she used – and why she used it – and how she used it – got old quickly. Needless to say, this book could have been significantly shorter and still very moving, maybe even more so. BUT, if you are a fan of The Bronze Horseman, you will no doubt find this “story behind the story” a must read!


(I voluntarily reviewed a complimentary copy of this book from HarperCollins and TLC Book Tours. All views expressed are only my honest opinion.)

Paullina Simons is an internationally bestselling author whose novels include Bellagrand and The Bronze Horseman was born in Leningrad in 1963. As a child she immigrated to Queens, New York, and attended colleges in Long Island. Then she moved to England and attended Essex University, before returning to America. She lives in New York with her husband and children.

What about you? Have you gone “back home”? Were you surprised by anything?