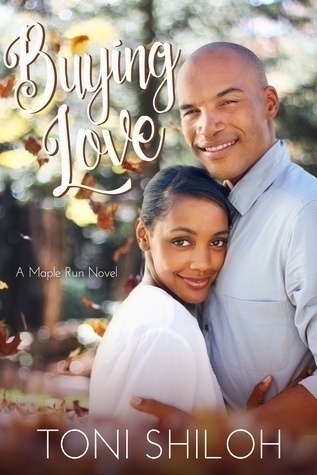 Will money ruin everything?

Nina Warrenton is ready for the next step in her life plan—marriage, but no one has proposed. Taking matters into her hand, she places an ad in the newspaper hoping to entice a willing stranger. But when she begins to fall for the small-town chef, she realizes how much she wants him to love her and not her money.

Dwight Williams needs fast cash to save the family restaurant. When he sees Nina’s monetary offer for a husband, he goes for it. He’s determined to save the legacy his dad left him, but can he let it go to prove his love for her?

Can Nina and Dwight find true love, once money has entered the equation?

“She didn’t want to ruin a family. Just belong to one.” 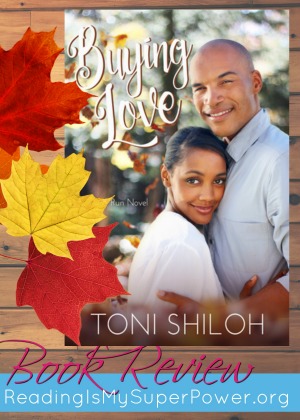 Toni Shiloh is new to me as an author but our paths have crossed often on blogging/review teams, etc. So when I heard about her book Buying Love, I jumped at the chance to review it!

I have one word to start out with – Dwight. Another word – yummy. And I’m not JUST talking about the delicious mouth-watering recipes he cooks up at his family’s restaurant The Maple Pit. Dwight himself is quite the swoonworthy hero. Not just because he looks like Laz Alonso but because he’s a man of solid character and a kind heart.

Dwight’s mama and I had a few words during the course of this novel though! She was in danger of a purse whomping a time or two, I must say. Good thing SHE doesn’t know how close she came or I might be the one in danger 😉

Nina is a great character! A little bit sassy, a little bit sweet – I enjoyed getting to know her as the story progressed. Her background is not as idyllic as Dwight’s, far from it in fact, but her relationship with Dwight is made all the more poignant because of these differences. While she may be rich monetarily, she’s all alone in the world – no friends, no family, no legacy. On the other hand, Dwight may have some financial difficulties in his business but he’s the rich one where it matters. This disparity between them – on both sides – gives depth to what could otherwise be a typical marriage-of-convenience tale.

Not that I have anything against a typical marriage-of-convenience tale. I happen to love them as a matter of fact. But this added dimension gives some meat (I’m clearly still thinking about that maple fried chicken…) to the story and to their relationship.

The theme of adoption and belonging in Buying Love really touched me. Such a beautiful picture of God’s love for us, and our relationship with Him. And y’all know I don’t like pausing my story for a “sermon”… well, in Buying Love there’s an actual sermon!! Lol! But, in this case, it fits pretty naturally with the course of the story and is a turning point emotionally for Nina so I’ll allow it 😉

All these years she had wanted desperately to be adopted, it turned out she was adopted the moment she became God’s.

And Beast… Zuzu will not let me forget to mention Beast. The lovable Saint Bernard was her favorite character in the book, and I have to agree with her that he added a lot of smiles to the mix 🙂

Bottom Line: Buying Love is a great start to a new series! The supporting characters set the stage nicely for future books, and I’m looking forward to more from Maple Run and Toni Shiloh. Dwight and Nina’s romance is sweet and even though it’s somewhat of a slow burn buildup it’s got plenty of sizzle and spark! This would be a wonderful choice for book clubs with many possible discussion threads throughout.


KissingBook Level: 3 / Might forget to breathe once they finally get around to kissing 😉 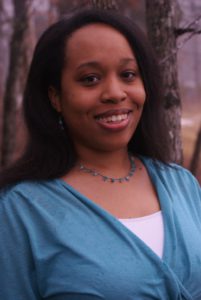 Toni Shiloh is a wife, mom, and Christian fiction writer. Before pursuing her dream as a writer, Toni served in the United States Air Force. It was there she met her husband. After countless moves, they ended up in Virginia, where they are raising their two boys. When she’s not typing in imagination land, Toni enjoys reading, playing video games, making jewelry, and spending time with her family. Toni is a member of the American Christian Fiction Writers (ACFW) as well as the ACFW Virginia Chapter.

Other Books by Toni Shiloh

In honor of her tour, Toni is giving away a $50 Amazon gift card!

21 responses to “Book Review (and a Giveaway!): Buying Love by Toni Shiloh”