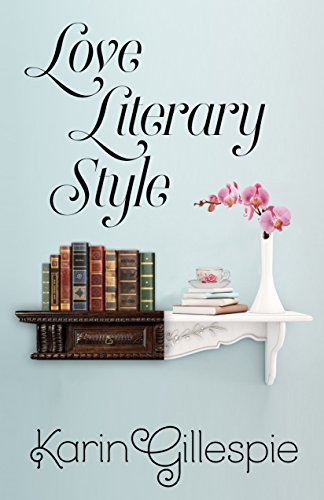 They say opposites attract, and what could be more opposite than a stuffy literary writer falling for a self-published romance writer?

Novelist Aaron Mite meets Laurie Lee at a writers’ colony and mistakenly believes her to be a renowned writer of important fiction. When he discovers she’s a self-published romance author, he’s already fallen in love with her.

Aaron thinks genre fiction is an affront to the fiction-writing craft. He often quotes the essayist, Arthur Krystal who says literary fiction “melts the frozen sea inside of us.” Ironically Aaron doesn’t seem to realize that he’s emotionally frozen. The vivacious Laurie, lover of flamingo-patterned attire and all things hot pink, is the one person who might be capable of melting him.

In the tradition of The Rosie Project, Love Literary Style is a sparkling romantic comedy which pokes fun at the divide between low and high brow fiction. 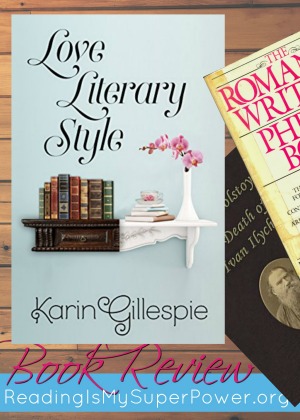 Love Literary Style is part The Rosie Project and part Legally Blonde. If you like romantic comedies in either film or book form, you will feel right at home among these pages. There’s a little bit of poking fun at the genre but overall it’s an affectionate homage to romance novels and “chick lit”.

Confession time, though. I didn’t really like Laurie. It’s ok. You can gasp.

She was – to be honest – ditzy. But not endearingly so like Elle in Legally Blonde. Actually, the discussion between Laurie and her friend Ramona about what Ramona doesn’t like about Laurie’s book could easily sum up my own thoughts about Laurie herself. Which… now that I think about it… may have been intentional on the author’s part. (more on that in a minute)

On the other hand, you have romantic hero Aaron. The guy who rescues a puppy from a thunderstorm. The guy who offers some meltingly sweet romantic gestures to the best of his limited ability. (The romcom marathon! The peanut butter! AH! I swoon!) Of course… as all romantic heroes do at some point in the course of a novel… he makes some stupid decisions and nearly loses the girl he loves.

Which brings me to another point (and the one I referred to when discussing Laurie) – I loved how the entire novel is really both a critique on itself and a nod to itself. Even as Aaron espouses his views on literary fiction and its merits, the events of the plot progress in true-to-form romance novel fashion. To the point that Aaron and Laurie both comment on that fact at separate intervals in the story. I love the irony!

Aaron’s father is another character who can’t be dismissed. For all that I didn’t like Laurie, her scenes with Aaron’s father were some of my very favorite in the book. Heartfelt and unexpected, this plot twist is something that elevated this book from a 3 star to a 4 star for me.

Bottom Line: If you know what the acronym HEA means … if you can envision what “orbs the color of a South Carolina sky on a June afternoon” look like … if you understand the term “romantic false lead” or the word “trope”, then you are the target audience for Karin Gillepsie’s Love Literary Style. A book that rarely takes itself very seriously but provides enough heartwarming moments to prevent it from becoming a farce. Ideal for a quick break from reality, especially for chick flick and romance novel aficionados.


Reviewer’s Note: This novel does contain some strong language, though it is not extensive, and several “door ajar” (non-graphic/non-explicit) intimate scenes.

(I voluntarily reviewed a complimentary copy of this book which I received from the author via TLC Book Tours. All views expressed are only my honest opinion.)

Karin Gillespie is the author of the national bestselling Bottom Dollar Girls series and Girl Meets Class. Her latest novel Love Literary Style was inspired by a New York Times article called “Masters in Chick Lit” that went viral and was shared by literary luminaries like Elizabeth Gilbert and Anne Rice. She’s written for the Washington Post and Writer Magazine and is book columnist and humor columnist for the Augusta Chronicle and Augusta Magazine respectively. She received a Georgia Author of the Year Award in 2016.

One of my readers (US/CAN only) will win a copy of Love Literary Style via the author and TLC Book Tours. Giveaways are subject to Reading Is My SuperPower’s Giveaway Policy.

What about you? What’s your favorite chick flick?

21 responses to “Book Review (and a Giveaway!): Love Literary Style by Karin Gillespie”