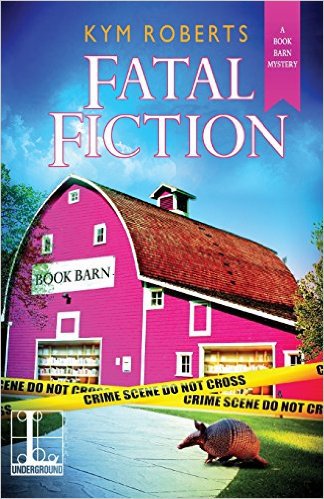 When kindergarten teacher Charli Rae Warren hightailed it out of Hazel Rock, Texas, as a teen, she vowed to leave her hometown in the dust. A decade later, she’s braving the frontier of big hair and bigger gossip once again . . . but this time, she’s saddled with murder!

Charli agrees to sell off the family bookstore, housed in a barn, and settle her estranged dad’s debt—if only so she can ride into the sunset and cut ties with Hazel Rock forever. But the trip is extended when Charli finds her realtor dead in the store, strangled by a bedazzled belt. And with daddy suspiciously MIA, father and daughter are topping the most wanted list . . .

Forging an unlikely alliance with the town beauty queen, the old beau who tore her family apart, and one ugly armadillo, Charli’s intent on protecting what’s left of her past . . . and wrangling the lone killer who’s fixin’ to destroy her future . . .

“Life has a way of putting some people in the wrong place at the wrong time.” 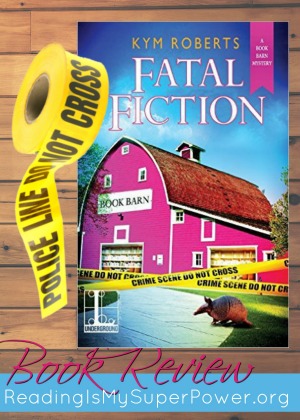 Fatal Fiction by Kym Roberts is a fun new cozy mystery with a sassy southern flair, a most unique pet, very likable (and diverse) characters and some romantic potential that looks to be interesting in future books.

First of all, the setting of this novel – an old barn that doubles as a book store is honestly the whole reason I decided to sign up for the tour. The armadillo as the token cozy mystery pet was icing on the cake. How anyone (besides perhaps Jen Turano) could give an armadillo personality, I don’t know, but Kym Roberts has managed to do just that. Princess the armadillo and Book Barn mascot may be one of my favorite characters in the book!

While we’re talking about characters, even though the book is narrated from the perspective of the main character Charli Rae Warren, Scarlet and Mateo are my favorite people. Scarlet – the operator of the Beaus and Bows salon (housed in an old saloon) and former classmate of Charli’s who ends up becoming Charli’s main ally and best friend – is a delightful combination of sass and sweetness. Mateo, the sexy local sheriff, is one of the potential romantic leads in future books… but i can’t quite tell yet if he’ll be Charli’s love interest or  Scarlet’s. And then there’s Charli’s ex-boyfriend who isn’t my fave but ups the tension in more ways than one. For her own part, Charli’s narrative voice is wonderfully wry and sincere and makes for a most enjoyable reading experience.

Bottom Line: Fatal Fiction by Kym Roberts hits all the right marks for me. Cute town, engaging characters, hint of romance, and a well-plotted/paced mystery that kept me on my toes. Add in the quirky pet and the bookstore setting and it’s a guaranteed favorite! I’m already looking forward to the next book in the series.


Reviewer’s Note: Readers may want to be aware that there are a few, very minor and very scattered, curse words in this novel. 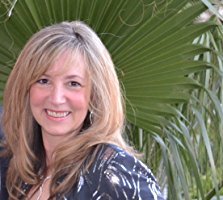 Three career paths resonated for Kym Roberts during her early childhood: detective, investigative reporter, and . . .nun. Being a nun, however, dropped by the wayside when she became aware of boys—they were the spice of life she couldn’t deny. In high school her path was forged when she took her first job at a dry cleaners and met every cop in town, especially the lone female police officer in patrol. From that point on there was no stopping Kym’s pursuit of a career in law enforcement. Kym followed her dream and became a detective who fulfilled her desire to be an investigative reporter, with one extra perk—a badge. Promoted to sergeant, Kym spent the majority of her career in SVU. She retired from the job reluctantly when her husband dragged her kicking and screaming to another state, but writing continued to call her name, at least in her head. Visit her on the web at kymroberts.com.

Follow along with the Great Escapes Blog Tour to see what others are saying!

7 responses to “Book Review (and a Giveaway!): Fatal Fiction by Kym Roberts”