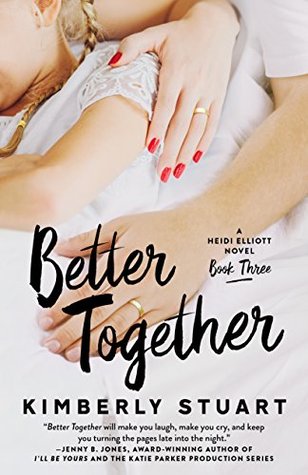 Now that she and Jake are parents of a kindergartner, Heidi has a to-do list a mile long. Like deep clean the kitchen cabinets. Volunteer in Nora’s classroom. Create sparkly USA ninja warrior Halloween costumes for two. Repaint several pieces of household furniture. Meddle in her best friends’ relationships.

Grieve her most recent failed pregnancy.

Jake wants to adopt. Nora plans to pray a sibling into existence. And Heidi keeps moving to avoid thinking about anything other than paint colors.

Thoughtlessness, of course, leads to mistakes and misunderstandings, and in the space of a month, Heidi manages to lose control of a group of kindergartners, make a terrible impression on the social worker, and damage—possibly irreparably—her closest friendships.

And then she remembers. She doesn’t have to go it alone. Sometimes we really are better together.

“God feels like He’s taken a road trip lately and I’m not sure I want to track Him down.”

This is my first read by Kimberly Stuart, but it will not be my last. She has a knack for taking emotional topics and presenting them with poignant grace, delightful humor. There were moments, sentences, paragraphs which had me snorting at Heidi’s dry wit as narrator (she speaks my language) or Nora’s precocious adorableness (to rival Ramona Quimby’s) or Jake’s “dad-ness” (the sparkly ninjas!).  But then there were equally moments, sentences, paragraphs, chapters which had me blinking away the tears so I could still READ forthelove. A couple of moments when I sucked in a devastated breath and exhaled a few paragraphs later with a slightly bruised heart. (Also a couple of moments when i had to reach for my fan because – whew – Jake is swoony when he gets a mind to be!)

The “realness” of these characters – of their struggles, of their love, of their faith, of their relationships – makes this a novel with a wide range of relate-ability. Maybe the reader doesn’t struggle with infertility … or she’s not a parent of a young child… maybe she’s not even married. But she certainly has girlfriends. And I guarantee she’s met someone just like Nora’s airy-fairy kindergarten teacher. The glimpse into Heidi’s life, into her marriage and parenting, as well as her journey through miscarriages and “what’s next”, her friendships and her flaws – all of these elements add life to an already vivid story.

I also love the “way” it’s written. While told solely from Heidi’s first-person perspective, the narrative also allows Jake and Nora their own space to shine. Nobody, not even the secondary characters, falls into the realm of cliche and just when you think they’re about to play to stereotype… they go and don’t. (Yes I know that sentence isn’t grammatically correct but it amused me.) And “Heidi’s” voice is witty and occasionally snarky and it really feels like you’re sitting down to read an email from an old friend.

Bottom Line: I don’t normally enjoy “married couple/family” stories as much as I do my KissingBooks. But after reading Better Together, Kimberly Stuart is now on my list of go-to authors! Better Together is emotional – from the good, the sad, and the ugly cry to snorts of laughter, you experience a wide range of reactions as you walk with Heidi and Jake and Nora through these pages. It’s also realistic and authentic as it shows the ups and downs of a marriage affected by infertility, the Murphy’s Law aspect of a home study presided over by a precocious kindergartner, and the consequences of isolating oneself from those who love you the most. Better Together is an entertaining story … and perhaps a cautionary tale of kindergarten 😉 But it’s also a touching reflection on life and love and healing. A definite must-read! 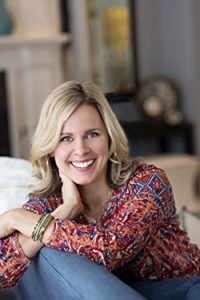 Kimberly Stuart, in an effort to condone the time and money spent, would like you to know she holds degrees from St. Olaf College and the University of Iowa.  She learned lots of interesting things at these fine institutions, none of which prepared her for the lethal cocktail of parenthood and writing. Stuart is the author of five published novels, including the Heidi Elliott series, Act Two, Stretch Marks, Operation Bonnet and a sixth, Sugar, set to release February 2017. She is a frequent public speaker and is passionate about helping others live great stories.

Kimberly lives, plays, works and eats lots of chocolate in Des Moines, Iowa, where she makes her home with one forgiving husband, three wily kids and a black Schnauzer named Scout.

Other Books by Kimberly Stuart

What about you? Which character from Better Together are you most interested in getting to know while you read the book?

22 responses to “Book Review: Better Together by Kimberly Stuart”