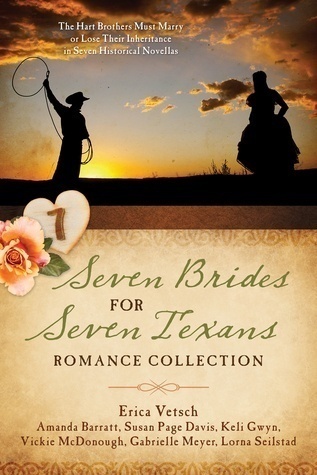 Meet the seven Hart brothers of the 7-Heart ranch in central Texas. Each man is content in his independent life, without the responsibilities of a wife and children—until their father decides 1874 will be the year his grown sons finally marry, or they will be cut from his will. How will each man who values his freedom respond to the ultimatum? Can love develop on a timeline, or will it be sacrificed for the sake of an inheritance?

What a great collection of connected novellas!

Multi-author collections are always a bit tricky to review because there’s generally one or two stand-out stories, a couple of good ones, a couple not-so-good ones, and the rest are just “okay”. Not so with Seven Brides for Seven Texans. I truly enjoyed each and every novella in this collection – and, really, when you look at the author list, you can see why. Seven top-notch authors in Christian historical fiction coming together to write basically a seven book series in one volume.

The prologue and epilogue are written by Erica Vetsch, and they introduce us to GW Hart – who is a fantastic character, by the way – and his plan to have his seven sons married off within the year. The prologue begins New Year’s Day 1874 and the epilogue takes place New Year’s Day 1875… and throughout the course of that year (and the collection) we get to meet all seven Hart brothers and watch them fall in love.

In First Comes Love by Gabrielle Meyer, we watch Hays Hart, the baby of the family, as he decides to put up signs all around Hartville advertising his availability as a husband. Hays is a bit of a flirt (understatement) but when he runs into the new pastor’s daughter Emma he decides to put his energy into wooing her. Emma is a tough case, though. She isn’t impressed (understatement) by his Wife Wanted signs and her heart is still back in Minnesota with the Ojibwe Indians. This is a cute story with heart and humor and a great first kiss! Their attraction is palpable, even though Emma at least tries to fight it. Watching Emma slowly fall in love with Texas, as she falls in love with Hays … and watching Hays’ priority switch from his inheritance to Emma are both highlights of this novella.

The Heart of Texas by Lorna Seilstad adds a little bit of suspense to the mix, as well as a swoonworthy Texas Ranger named Chisholm Hart and a feisty heroine to complement him. Caro and Chisholm may seem like an unlikely pairing in personalities but their chemistry sizzles. Lots of great back-and-forth between these two as they try to figure out who is behind the cattle rustling at the ranch where Caro works. You won’t be quite sure whom you can trust, but your mouth will be watering at all the mention of delicious-sounding food!

Amanda Barrett’s The Truest Heart has a little bit of everything good – drama, suspense, first loves, an adorable child, and strong emotion. Midwife (and widow) Annie Lawrence returns to Hartville with her nine-year-old son Robbie to face two men she’s been dreading: her father and her first love. Her father, she can’t do much about. But she certainly try to avoid her first love, Dr. Travis Hart. That resolve lasts about as long as one of her first deliveries, which proves more difficult than she anticipated, and Travis is brought in to lend support. Old wounds between them run deep but must compete with the affection and attraction that has never gone away. Excellent tension – both the dramatic kind and the romantic – and Robbie is one of my favorite secondary characters across the collection.

In A Love Returned by Keli Gwyn, the Texas air simmers with another reunion between first loves whose wounds and affections still run deep. Instead of fighting in the War Between the States, Sam Houston Hart headed out to California.  Twelve years ago, he asked Coralee Culpepper to join him but she refused, saying she couldn’t leave her family. Houston goes off to California in a snit. Coralee stays home in one. Twelve years later, they’ve never gotten over it – or each other.  But in one startling moment, Houston realizes why Coralee had to refuse him…. and his tenderness, his acts of service to her and her family, from that point forward are so sweet and incredibly touching. Very tender and romantic novella!

For Love or Money by Susan Page Davis is a story of tragedy and heartache as well as redemption and romance. When a tragedy leaves a neighboring family homeless, Crockett Hart takes them under his wing and oversees the community’s efforts to rebuild their cabin and meet their needs. In the process, he falls in love with a girl he’s known since childhood.  Get all cozied up in the warm glow of young love, but don’t get too relaxed. Lots of drama, a little bit of intrigue, and additional tragedy that may end the romance before it has a chance to take root. This is another sweet novella with frequent appearance from the rest of the “cast”, so to speak, that really helps unite the collection even further.

Vickie McDonough’s Mail Order Mayhem is a case of the title perfectly fitting the story. Oldest Hart brother Austin has decided to bypass all the shenanigans his other brothers have gone through to find their brides and sends away for a mail order bride. She finally arrives with her sister, identical twins who couldn’t be more different in personality. While Jenny seems spoiled and immature and flighty, Rebekah is grounded and sensible. Complications abound in this novella – mayhem ensues – and the ending may not be as predictable as you first think. It will make you swoon, though. That I can absolutely guarantee!! Lots of heart fluttering to be had in this story as well!

Finally, in Love at Last by Erica Vetsch, we get the story I’d been waiting on since the prologue – Bowie Hart’s story. Bowie is the Hart brother who most intrigued me right from the very beginning, and I knew that when his story came around it would be a fantastic one. I was not wrong. From the moment Bowie goes all knight-in-shining-armor for the woman he means to marry (even if she doesn’t know it yet), I knew I needed to hasten to the safety of my figurative fainting couch for the duration of this novella. Much swooning to be had, for sure. But also, such an incredibly sweet message of self-value and accepting love – lessons needed for both Bowie and Elise.

Bottom Line: Seven Brides for Seven Texans is an excellent novella collection all the way around. From the characters to the cohesiveness to the setting and the theme, every element in every story is presented with excellence. You will laugh. You will cry. You will swoon. And then repeat seven or so times 🙂 I highly recommend this one for anyone who loves historical Western romance.


(I voluntarily reviewed a complimentary copy of this book which I received from one of the authors. All views expressed are only my honest opinion.)


KissingBook Level: 3 / May forget to breathe from time to time

Head to the 7 Brides for 7 Texans website to find out more about each of the authors!

And while you’re there, enter their LOADED KINDLE FIRE GIVEAWAY!!! 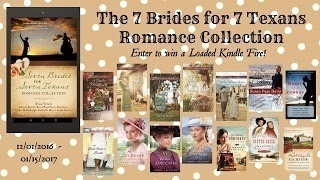