As a Kentucky reader, I am delighted to chat today with a Kentucky author – James Markert. 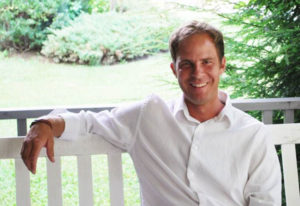 James Markert lives with his wife and two children in Louisville, Kentucky. He has a history degree from the University of Louisville and won an IPPY Award for “The Requiem Rose,” which was later published as “A White Wind Blew,” James is also a USPTA tennis pro. Learn more at jamesmarkertbooks.com 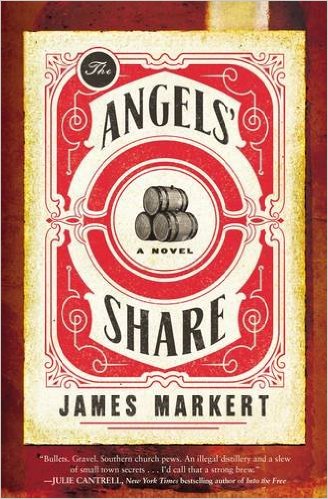 Some believed he was the second coming of Christ. William wasn’t so sure. But when that drifter was buried next to the family distillery, everything changed.

Now that Prohibition has ended, what the townspeople of Twisted Tree, Kentucky, need most is the revival of the Old Sam Bourbon distillery. But William McFee knows it’ll take a miracle to convince his father, Barley, to once more fill his family’s aging house with barrels full of bourbon.

When a drifter recently buried near the distillery begins to draw crowds of pilgrims, the McFees are dubious, but miracles seem to come to those who once interacted with the deceased and to those now praying at his grave. As people descend on the town to visit the “Potter’s Field Christ,” William seeks to find the connection between the tragic death of his younger brother and the mysterious drifter.

But as news spreads about the miracles at the Potter’s Field, the publicity threatens to bring the depth of Barley’s secret past to light and put the entire McFee family in jeopardy.

The Angels’ Share is a story of fathers and sons, of young romance, of revenge and redemption, and the mystery of miracles.

Most people recognize Kentucky first of all for horses and the famous Kentucky Derby in May. But it’s also famous for many things besides horses – bluegrass, basketball, and bourbon. And while I myself am not personally a fan of bourbon (no offense, bourbon… it’s not you, it’s me), I have come to appreciate its history and character thanks to my brother and sister-in-law who do love it. As such, I was naturally drawn to the history spotlighted in The Angels’ Share.

In fact, here’s a bit of “whiskey wisdom” for y’all:

Hi James! Welcome to the blog! Let’s get right to the interview…

The Angels’ Share is not just the title of your new book. It’s also a term used for the amount of alcohol which evaporates from the casks during the maturation process. So the title therefore draws a question: Does whiskey play a pivotal role in your book?

James: Bourbon whiskey plays a major role in the book. The McFee distillery was the lifeblood of the town of Twisted Tree, and bourbon was the blood that ran through its veins.  After prohibition and family tragedy, their hearts needed to be kick-started again. This push came in the form of a homeless man recently buried in the neighboring potter’s field. Asher Keating is dead the entire book, yet brings life to anyone willing enough to embrace the impossible. Soon the bourbon barrels are rolling full across the runs again.

Carrie: Asher Keating is such an intriguing character, and I confess that I had never before thought of what effect the Prohibition had on Kentucky distilleries. This is something I would love to learn even more about in the future.


How is bourbon (very much its own character as well) like the other characters in the story?

James: The McFee distillery was closed down at the beginning of Prohibition, and like several characters in the book, it gets a chance for new life. Of course, bourbon breathes and it ages–like we all do!

Carrie: The theme of resurrection and new life throughout The Angels’ Share – even in some very subtle ways – was my favorite part of the book! I loved the symbolism.

Nearly 800,000 people toured bourbon distilleries in 2016. As a resident of Kentucky—the heart of the Whiskey Trail—why do you think this is so?

James: I’ve visited about 10 of the distilleries on the bourbon trail and haven’t been to one that wasn’t beautiful. Buffalo Trace Distillery in Frankfort, Ky., is a great tour. When I was there walking the grounds, I saw barrels rolling out of various buildings and into others. I got to see the barrel runs up close and personal, like train tracks connecting several of the buildings. The distillery that helped inspire the fictional town of Twisted Tree was the Woodford Reserve Distillery in Versailles, Ky. Small, quaint and bordered with trees and horse farms, it has an ambiance that’s truly memorable.

I know several people who love the tours but don’t necessarily like bourbon—it comes down to the atmosphere. It’s the countryside, the smell of the mash across the grounds and the angels’ share inside the aging houses. People have fallen in love with the process, from the grains to the aged liquor. Every distillery seeps with beloved history.

Carrie: My dad – who, like me, doesn’t drink alcohol – went with my brother and sister-in-law on a tour of the Woodford Reserve Distillery a couple of months ago. He still talks about how interesting it was! The science behind it, the history, the beauty of the distillery.

How does your history degree play into your newest book?

James: It certainly helps in the research, because I did plenty of it in college. I love history, but beyond that, I write stories set back in time because I like to learn. Having fun writing and learning at the same time is a great process.

Carrie: Having fun READING and learning at the same time is great too! 🙂

If you branded a whiskey/bourbon what would it be called?

James: I won’t give away too much, but I’m planning on turning Old Sam, the fictional bourbon in the book, into a real bourbon.

What are 3 of your favorite books and a bourbon that matches the mood?

James: The Alienist by Caleb Carr with Very Special Old Fitzgerald: full bodied with touches of butterscotch and vanilla, leather and tobacco, with a warm soothing finish.

The Stand by Stephen King with Blade and Bow: Hints of vanilla and chocolate with a wave of cinnamon and spices, with a finish that packs a flavor-filled punch.

Beach Music by Pat Conroy with Knob Creek: full bodied, woody with hints of fruit and toasted nuts, with a long, rich finish.

The process of distilling is being viewed as an art form. Thoughts on any parallels between that process and the writing process?


James: Well, certainly time and love go into both, in equal parts. From the mash bill to the yeast formula, to the barrel char and period of time the bourbon is aged, it’s all in the details and recipes that make each distillery and brand unique. The same can be said for creating a good story:  They’re completed in layers and numerous drafts over time until a final product is produced. Bourbon and a good story both need time to age.

Carrie: And both require more work and talent than most people realize!

Let’s carry that thought a bit further – compare a good bourbon to a good story.

James: They both go down smoothly, full-bodied and flavorful, with a hint of that thrilling burn on the finish.

Photos used with permission from Josh Booth Photography. They may not be reproduced or republished in any form.