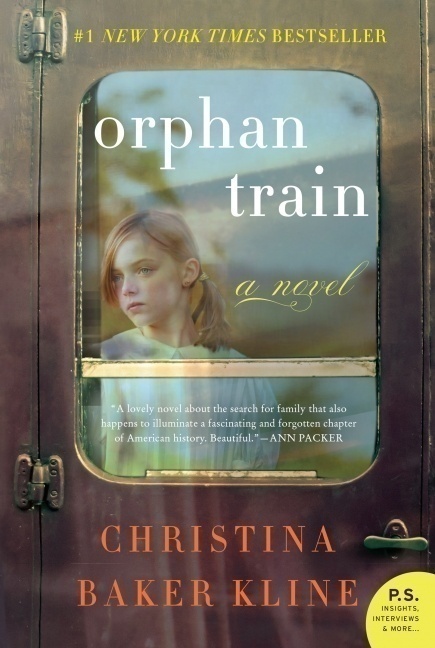 Christina Baker Kline’s #1 New York Times bestselling novel—the captivating story of a 91-year-old woman with a hidden past as an orphan–train rider and the teenage girl whose own troubled adolescence leads her to seek answers to long-buried questions…now with an extended scene that addresses the number one question readers ask, and an excerpt from Kline’s upcoming novel A Piece of the World

“A lovely novel about the search for family that also happens to illuminate a fascinating and forgotten chapter of America’s history. Beautiful.”—Ann Packer

Between 1854 and 1929, so-called orphan trains ran regularly from the cities of the East Coast to the farmlands of the Midwest, carrying thousands of abandoned children whose fates would be determined by pure luck. Would they be adopted by a kind and loving family, or would they face a childhood and adolescence of hard labor and servitude?

As a young Irish immigrant, Vivian Daly was one such child, sent by rail from New York City to an uncertain future a world away. Returning east later in life, Vivian leads a quiet, peaceful existence on the coast of Maine, the memories of her upbringing rendered a hazy blur. But in her attic, hidden in trunks, are vestiges of a turbulent past.

Seventeen-year-old Molly Ayer knows that a community service position helping an elderly woman clean out her home is the only thing keeping her out of juvenile hall. But as Molly helps Vivian sort through her keepsakes and possessions, she discovers that she and Vivian aren’t as different as they appear. A Penobscot Indian who has spent her youth in and out of foster homes, Molly is also an outsider being raised by strangers, and she, too, has unanswered questions about the past.

Moving between contemporary Maine and Depression-era Minnesota, Orphan Train is a powerful novel of upheaval and resilience, of second chances, and unexpected friendship.

“And anyway, how do you talk about losing everything?”

I have long been intrigued by Christina Baker Kline’s Orphan Train but have not had time to read it before now. When TLC Book Tours contacted me, asking if I wanted to read it, I happily agreed. And I’m so glad I did.

The dual timeline poetically enhances the story, and the parallels between modern rebellious teen Molly and 1929 orphaned child Vivian are touching and profound. Their present day friendship, an unlikely match by anyone’s standards, seems to fill in what’s missing in each life; the changes they evoke in each other are at once tender and entertaining.

The history geek in me did cartwheels as I sank fully into this fascinating (and heartbreaking) period in American history. The orphan trains full of abandoned and orphaned children, the rules and standards the children were held to, the gamble that it really was. Who knew, after all, if they would end up with a kind family, an aloof family, or an abusive family. Or if “family” was really on the table, the orphan instead being adopted into what amounted to slavery. And the friends they made on the train – would they ever see each other again?

The jump to our current foster care system – and Molly’s journey through it – paralleled Vivian’s journey to find a home as well.  While I wish Molly’s foster parents had been portrayed in a better light (because I know so many wonderful foster parents), I understand why it was necessary for Molly’s character and the direction of the story.

Bottom Line: The history in Orphan Train is captivating and haunting. From a look at Irish immigrants during the late 1920s to the orphan train itself to the stock market crash and even to more recent Native American history, you will find yourself swept away by the story even as you devour the history. It’s an emotional read, and one that will most likely linger with you long after you’ve finished it.

Reviewer’s Note: Readers may want to be aware that there is some extensive language (mostly from Molly) as well as some adult situations.

Christina Baker Kline is the author of five novels. She lives out-side of New York City and on the coast of Maine.

Other Books by Christina Baker Kline

Follow along with the TLC Book Tour to see what others are saying!

What about you? What most interests you about this book?