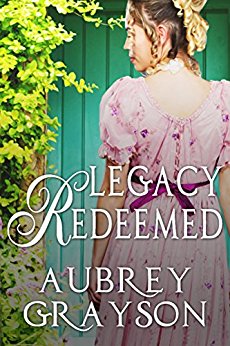 Susannah Blackmon is desperate when she learns her fiancé jilted her and her dowry is gone. Her guardian devises a nefarious scheme to ensnare Susannah in an unsavory life, and she knows she must flee. But to where? When she meets a mysterious stranger at a masquerade ball, he inadvertently directs her to his family’s vicar, and she heads to the seacoast to escape the worst. But drat it all—her mystery counselor invades her newfound space, and she risks exposure. Will she ever redeem the life her parents had hoped for her?

Nick Daventry is a widower, with a young son, whose family is encouraging him to remarry. But Nick never expects to find love again. When he discovers his inheritance is in jeopardy thanks to a crazy provision in his grandfather’s will, he puts everything he has into saving it. He returns to his coastal home, only to encounter a deceiver in the form of a devilishly beautiful woman he’d traveled all the way from London to escape. But is she the key to redeeming what is lost?

“Sometimes we are most adventuresome when we have nothing to lose.” 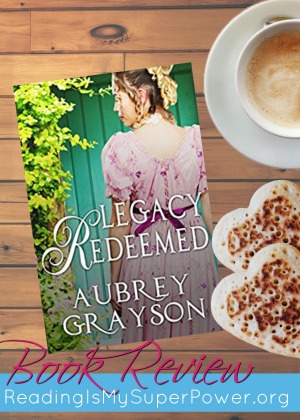 I knew I was going to like Aubrey Grayson’s debut novel from the moment her hero Nicholas Daventry declares his elderly aunt’s masquerade ball harem girl costume “ague-inducing“. I fell head over heels in love with it (and with Nick) about the time he dubs the heroine “his very own Cinderella“.  Legacy Redeemed is sweet and funny and romantic, and it reminds us all that redemption is offered lavishly.

The wry humor had me chuckling often, particularly at Nick’s dialogue with himself. I’ve already mentioned the ague-inducing observation but another fave? Nick’s internal berating of himself for noticing Susannah’s nose! Letitia – Nick’s childhood friend and Susannah’s new one – provides additional opportunities for warm humor, and Nick’s son Gabriel is an absolutely adorable cause for plenty of smiles.

And let’s not forget the romance!! There’s not a lot of kissing on these pages but what there is more than makes up for the deficit. And I never thought I’d say this but I didn’t really miss the kissing. (Are you all still with me or have you passed out from the shock?!?) Nick and his thoughts about what he’s most certainly not feeling (wink wink) for Susannah and Susannah with her thoughts of the same are so deliciously swoonworthy that the kissing is just icing on the cake!

But even more than the delightful humor and the swoony romance, the theme of Legacy Redeemed is sincere and naturally incorporated into the story. The message of grace, redemption, and forgiveness fits so smoothly within the framework of the plot that it never comes across as preachy or trite. Instead its sweet truth will wrap around your heart and soothe even as it nudges your spirit.

Bottom Line: Legacy Redeemed by Aubrey Grayson is a refreshing new voice in Christian historical fiction. It is witty and droll and romantic and full of grace, not to mention vibrant characters that settle in your heart. The underlying subplot of Susannah’s guardianship promises to continue its intriguing story in future books, and I’m very much looking forward to anything this author has coming up next! If you’re a fan of Kristi Ann Hunter, then you definitely need to check out Aubrey Grayson! 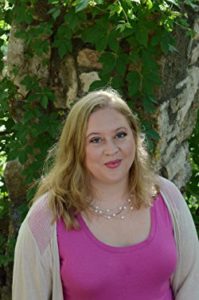 From a young age, Aubrey Grayson devoured books with alarming alacrity. Ignoring her mother’s pleas of “Come and watch TV with us!”, her most frequently uttered response was “Just let me finish this chapter!” She dreamed that one day, she could write stories just as entertaining as the ones she found at her local library. When a middle school teacher informed her that her writing suffered in comparison, little Aubrey gave up on the dream of living a life full of words, and found solace in something she discovered she liked just as much – numbers! As she grew, she eventually embarked on a career in corporate finance, complete with a shiny, expensive MBA. But as God is wont to do, He pulled her off this path a few years in, and gave her back her dream of writing. She hopes you enjoy reading her work at least as much as she enjoyed writing it, which is to say – a lot! Aubrey Grayson lives in Texas with her own Prince Charming, and three not-so-little children.

What about you? Nick & Susannah meet at a masquerade ball. If you were going to one, what would your costume be?