As part of the Singing Librarian Books tour, I am reposting my review for Surround Me! 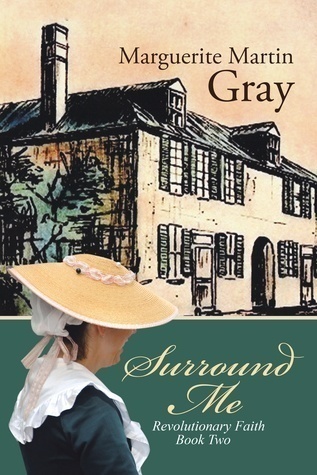 Returning to Charles Town, Louis faces obstacles surrounding his engagement to Elizabeth and a city questioning its role in a volatile resistance to British rule.

As the dark curtain of the rumors of revolution threatens to descend, Louis Lestarjette pursues his relationship with Elizabeth even as the emotion and physical struggles set the course for a life of changes. Will his commitment to God stay firm or will the tide of change cause fear and flight?

The chance of reconciliation with England moves further out to sea leaving Elizabeth Elliott on the shores of surrender to a greater challenge. Although others of unwavering courage give her strength, she must choose to allow God’s love to surround her. How can she enter into a marriage during a time of uncertainty? Will selfish, safer options take her away from Louis and his love? 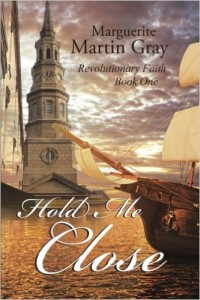 “I’m afraid our lives will be changed forever if things continue as they are.”

Meticulously researched and rich with historical detail, Surround Me continues the story of Louis Lestarjette and Elizabeth Elliott – the author’s actual ancestors who lived and breathed and fell in love during the pre-Revolutionary stirrings in South Carolina.  Particularly compelling to me in this second book of the series (which could be read as a stand alone but would be much better appreciated if you’ve read Hold Me Close already) is the scene in which Louis gives Elizabeth a wedding gift, which Gray talks about in her author’s note below. The history/ancestry geek in me drinks that kind of stuff in, y’all.

Along with Louis and Elizabeth’s romance, the discontent in the colonies has nearly reached a boiling point and loyalties are becoming more dangerous, more defined, and more divided by the day. Peeking over Louis’ shoulder as he signs the document that will help Charles Town merchants protest Britain’s Tea Act is another of my favorite scenes in the book. The author well-captures the tension of the moment, the sobriety of Louis’ thoughts, the weight of the decision and its implications for the future.

Bottom Line: As with Hold Me Close, the dialogue sometimes sounds more like narrative and the narrative sometimes reads like a history textbook BUT the characters are so vivid and engaging that it was easy to overlook this issue of preference as I read. The emphasis on hope and on trusting God despite an uncertain future is timely for our world today just as much as it applied to the world in which Louis and Elizabeth lived. Fans of historical fiction will appreciate the author’s attention to detail, and after the mysterious note Louis receives I am even more so looking forward to the next book and learning what lies ahead for them in 1775. 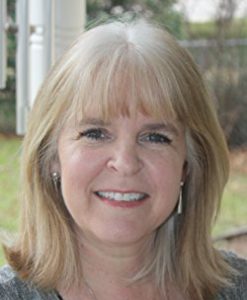 Marguerite Martin Gray is the author of Hold Me Close, Revolutionary Faith Book One and Surround Me: Revolutionary Faith Book Two. She enjoys studying history and writing fiction. An avid traveler and reader, she teaches French and has degrees in French, Spanish, and Journalism from Trinity University in San Antonio, Texas and a MA in English from Hardin-Simmons University in Abilene, Texas. Marguerite is a member of American Christian Fiction Writers, Abilene Writers Guild, and Daughters of the American Revolution. Originally from Louisiana, she currently lives in Abilene with her husband. 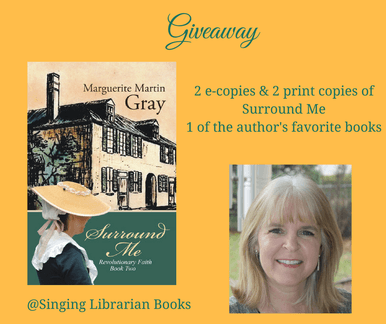 8 responses to “Book Review (and a Giveaway!): Surround Me by Marguerite Martin Gray”