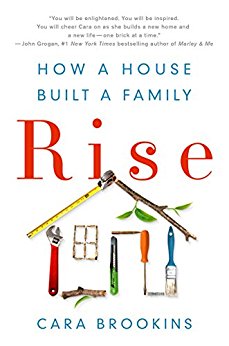 If you were inspired by Wild and Eat, Pray, Love, you’ll love this extraordinary true story of a woman taking the greatest risk of her life in order to heal from the unthinkable.

After escaping an abusive marriage, Cara Brookins had four children to provide for and no one to turn to but herself. In desperate need of a home but without the means to buy one, she did something incredible.

Equipped only with YouTube instructional videos, a small bank loan and a mile-wide stubborn streak, Cara built her own house from the foundation up with a work crew made up of her four children.

It would be the hardest thing she had ever done. With no experience nailing together anything bigger than a bookshelf, she and her kids poured concrete, framed the walls and laid bricks for their two story, five bedroom house. She had convinced herself that if they could build a house, they could rebuild their broken family.

This must-read memoir traces one family’s rise from battered victims to stronger, better versions of themselves, all through one extraordinary do-it-yourself project. 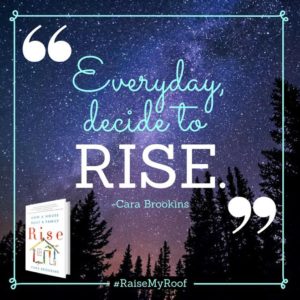 The chapters in Rise are divided into two headings – “Fall” and “Rise”. Those that come under the “Fall” heading revolve around flashbacks, scenes of abuse and fear that Cara Brookins and her family lived under for years. The “Rise” chapters focus on their decision to survive, to recover, and to figure out how to thrive again.

No one should have to endure what they suffered, and my heart ached as a woman to read about her pain. And especially I hurt for her kids. They had to grow up too fast, and they spent way too many years that should have been carefree looking over their shoulders instead.

But then … they rise. From the ashes.

I liked that the chapters alternated the way they did, though it took a bit of getting used to at first. It broke up the heaviness of the flashbacks as well as the sometimes mundane nature of the house building sections. Cara’s writing voice is conversational and easy to follow, though there were some cases where I felt she was too matter of fact given the subject matter. The visualization thing with Benjamin (a spirit guide? not sure) goes against my own beliefs about communicating with God, but considering that religion was used to convince her to stay with her abusive husbands for too many years … I also can’t blame her for not wanting to confide in Him. (Which deeply saddens me… and angers me for her – not at her. Because the Jesus I know is fiercely protective of His own and He would have been the first to tell her that she needed to get herself and her children to a safe place.)

Bottom Line: Rise by Cara Brookins is inspiring as much as it is heartbreaking. The narrative is well-written and engaging and is organized in such a way that it gives readers breaks and levity when both are needed. While I wish it had less profanity and had avoided the whole visualization/Benjamin thing altogether, I did love how Cara and her children chose to move forward together. They built a house together. Even with teenagers involved! What could have irreparably destroyed all of them ultimately made them stronger as a family and as individuals. And that’s really the theme of Rise.


Reviewer’s Note: Readers may want to be aware that there is some excessive language throughout this book. There are also accounts of abuse that, while they should absolutely disturb us all, may be especially disturbing to some readers. 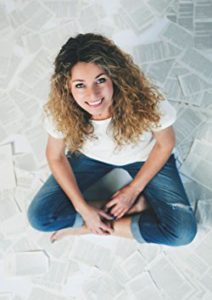 Cara Brookins is a computer analyst and social media marketing expert based in Little Rock. You can read more about her, as well as see shots of her home and family at http://www.carabrookins.com/. Her memoir, Rise: How a House Built a Family details the house she built with her children after they had left a domestic violence situation. She is also the author of seven middle grade and young adult novels and one adult novel.

What about you? Have you ever built anything? Do you think you could build your own house?