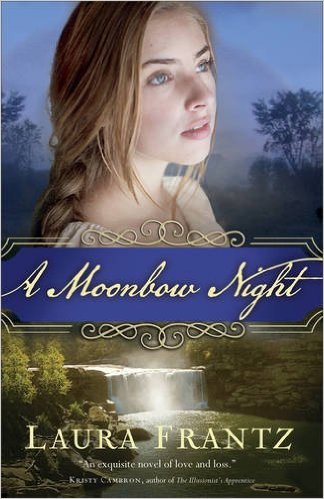 After fleeing Virginia, Temperance Tucker and her family established an inn along the Shawnee River. It’s a welcome way station for settlers and frontiersmen traveling through the wild Cumberland region of Kentucke–men like Sion Morgan, a Virginia surveyor who arrives at the inn with his crew looking for an experienced guide.

When his guide appears, Sion balks. He certainly didn’t expect a woman. But it is not long before he must admit that Tempe’s skill in the wilderness rivals his own. Still, the tenuous tie they are forming is put to the test as they encounter danger after danger and must rely on each other.

With her signature sweeping style and ability to bring the distant past to vivid life, Laura Frantz beckons readers to join her in a land of Indian ambushes, conflicting loyalties, and a tentative love that meanders like a cool mountain stream.

“…even on the darkest nights there was a glimmer of hope, of promise, however hazy..”

When you pick up a book by Laura Frantz, you are immediately swept away by the exquisite lilt of the narrative, by the vibrancy of the setting, and by the life in the characters.  A Moonbow Night is no exception.

I especially love reading her Kentucke books, the name given by various Indian tribes to the hunting ground that would become the state in which I now live. The rich history comes alive in ways I would have not predicted, and I must confess to a squeal of history geek delight when Daniel Boone swaggered across a scene or two.  In many ways, the Kentucke wilderness in A Moonbow Night becomes a character all its own, and with each Kentucke book I read by Laura Frantz I develop a greater appreciation for the men and women who bravely lived and died and fought and sacrificed to settle the state I find so beautiful. (As a side note, the snippets and snatches from historical accounts included at the beginning of each chapter were another highlight of the book for me!)

Tempe and Sion are wonderfully layered protagonists, each possessing rich emotions and poignant depth. Both of them have suffered greatly at the hands of the frontier, and both have left parts of their hearts behind in graves dug in the aftermath of Indian raids. While one has rejected God nearly completely, save the wisdom of his most trusted friend, the other clings to Him with one hand while holding Him at a wary distance with the other.  And considering the example she has in her father, it’s really no wonder (If ever a character needed to be purse whomped, it is Tempe’s father.)

And let’s not forget to mention the romance, aye? (Side note…. There’s something so swoony about these frontiersmen and their ‘ayes’. Blissful twitterpated sigh.) While A Moonbow Night isn’t drowning in romance, a certain kissing tree … and a certain cave scene … and a … well, you get the idea. It’s not lacking in romance by any stretch of the imagination. And since Laura Frantz has a distinct gift for making every word count, trust me when I say to make sure you read this from the comfort of your favorite fainting couch or facsimile thereof 🙂

Bottom Line: A Moonbow Night by Laura Frantz is a book you’ll want to devour in one sitting, yet somehow simultaneously find a way to savor each word so it lingers as long as possible. The beauty of the landscape, the richness of the history, the heart of the characters – all of these will beckon you to settle amongst the pages and immerse yourself in a world of wilderness and courage and discovery. And above all, steady and true, shines the moonbow with its promise of hope and restoration after a season of despair. A promise we could all use a little of today, aye?

(I voluntarily reviewed a copy of this book which I purchased from Amazon. All views expressed are only my honest opinion.) 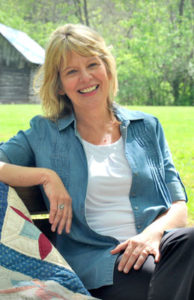 Award-winning author Laura Frantz is passionate about all things historical, particularly the 18th-century, and writes her manuscripts in longhand first. Her stories often incorporate Scottish themes that reflect her family heritage. She is a direct descendant of George Hume, Wedderburn Castle, Berwickshire, Scotland, who was exiled to the American colonies for his role in the Jacobite Rebellion of 1715, settled in Virginia, and is credited with teaching George Washington surveying in the years 1748-1750. Frantz lives and writes in a log cabin in the heart of Kentucky.

Other Books by Laura Frantz

What about you? What do you think would be the most difficult part about living in an unsettled wilderness?

29 responses to “Book Review: A Moonbow Night by Laura Frantz”