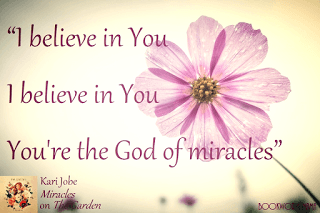 Special thanks to Bookworm Mama for the use of her beautiful quote memes! 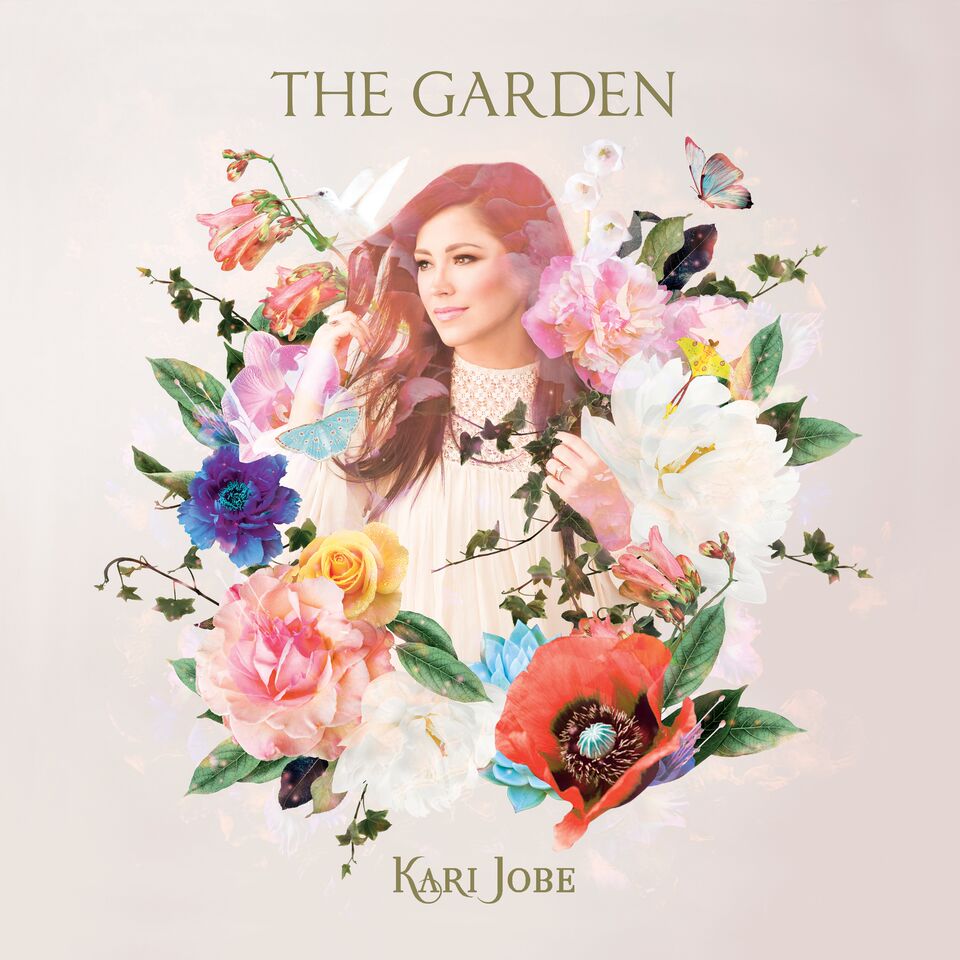 Coming off her last live album, Majestic, which featured the worship anthem “Forever” and radio hit “I Am Not Alone,” Kari Jobe has returned to the studio to record her new album, The Garden, full of brand new worship anthems for the church and for personal reflection.

Finding inspiration from life’s joys and hardships, Kari leans into the firm foundation of Christ through it all.

It’s said for everything there is a season. Winter. Spring. Summer. Fall. One by one, we experience these seasons throughout our lives. Our souls grow dark and weary in the thick of winter, and just when we think we can’t endure another cold night, we recognize the first signs of spring. Slow and unexpected, welcome shades of green break through the frozen ground. Sometimes our Creator uses His own creation to remind us that even amidst winter’s chill He is always at work. For it’s in the unseen where life’s most beautiful moments take shape. Worship leader Kari Jobe knows this to be true in her own life, and on her fourth album, The Garden (Capitol CMG), she invites listeners to drink of the wellspring of hope she’s found in the midst of unimaginable tragedy. 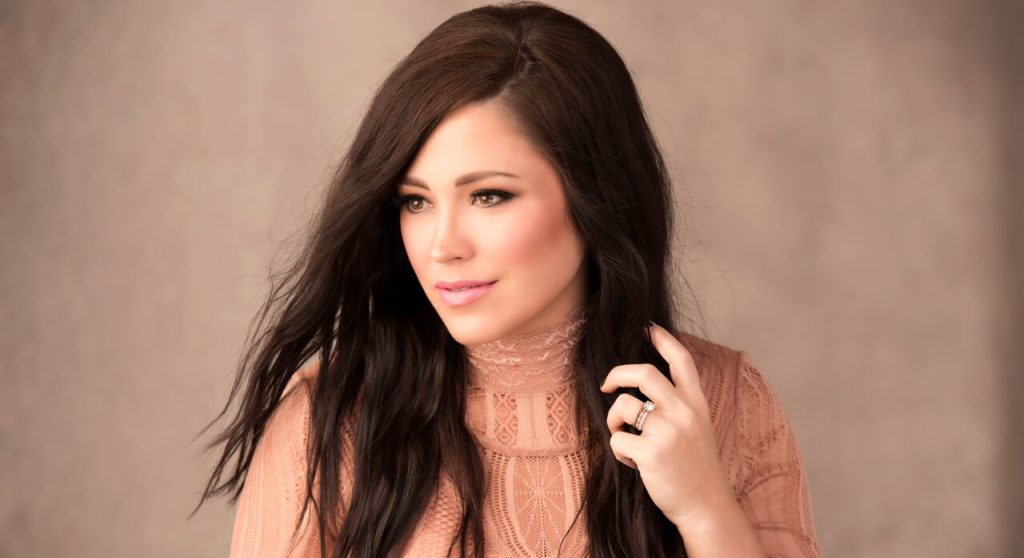 Jobe has earned the right to speak from experience. She’s become a trusted friend to listeners throughout a career that includes more than 1 million albums sold, a GRAMMY® nomination, multiple Dove Awards and praise from the New York Times. She’s amassed 173 million career streams and is the most-followed female CCM artist on social media with a following that exceeds 3.5 million. Beyond the stats, Jobe’s timeless songs have carried countless listeners to the feet of Christ over and over again. Her voice has become a soundtrack to people’s lives, and The Garden is well-equipped to bring healing in the midst of pain.

While The Garden planted the songwriter back in the studio following 2014’s critically-acclaimed live recording, Majestic—which won a GMA Dove Award for Praise and Worship Album of the Year—the new album is also rooted in a series of personal transition and remarkable grief for the singer and her family. In the past two years, Jobe married her husband Cody Carnes and moved from her hometown of Dallas, Texas, to Nashville, where the couple bought their first home and had a baby. With due dates three months apart, Jobe and her sister, Kris, were excited to be pregnant at the same time. Yet, in the midst of happy life changes, heartbreak struck. Seven-and-a-half months into her pregnancy, Kris gave birth to a stillborn daughter, James Ivy. Jobe, four months pregnant with her son at the time, was devastated. 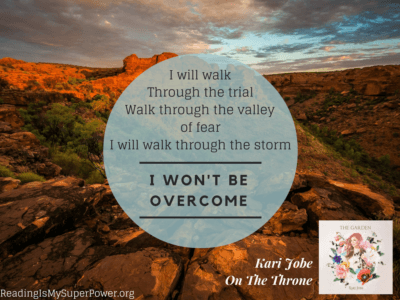 “It just shattered my heart. It was so, so hard,” Jobe shares. “It wrecked me—just the weight of unanswered prayers. I was trying to walk in peace when I didn’t feel peaceful and find my rest when my spirit didn’t feel rested.”

Aching for her sister, Jobe was simultaneously anxious for the safety of her own child. On February 18, 2016, a healthy Canyon Carnes entered the world. “It’s hard to celebrate life, but to be grieving with your sister,” Jobe admits, adding that knowing Canyon’s name ahead of time gave her strength through the remainder of her pregnancy after the loss of her niece. “God gave us his name even before this whole thing took place,” she says. “Canyon means a deep ravine for water to flow through. Canyons are formed through storms, so the fact that God gave me his name was so peaceful to me… I was thankful He gave me his name for that season.”

While the birth of her son was undoubtedly a milestone to celebrate, her sister’s loss weighed heavy on her heart. Yet, a reminder of God’s kindness came in a surprising way. As Jobe held Canyon in her arms, she stood looking out the kitchen window of her new home. And there in her backyard, she glimpsed the first signs of spring. When she and her husband purchased the house, a garden that resided on the property was overgrown; and though they knew it needed to be tended, they were advised to wait and see what it produced. The result was a breathtaking bounty of 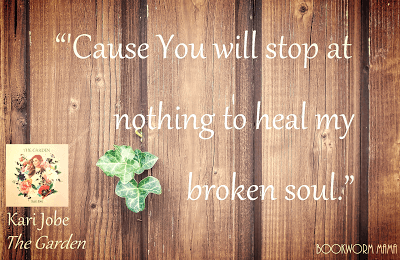 harvest. That day, Jobe made her way through the garden—a stark reminder of God’s faithfulness in all circumstances. Looking up, interwoven in the archway, she couldn’t help but smile as she saw what only God could produce: thick, green ivy lacing its way overhead, immediately reminding her of her niece’s namesake.

The experience yielded the title track for Jobe’s new album and fresh healing for her soul. “Those seeds were planted years ago for it to be the way that it was that day for me, because it wasn’t just last year that they planted all this beautiful ivy. That took years,” she observes. “Something in my spirit started to rustle. Life was coming back. What felt dead in my heart was starting to wake up. It was like I’d been in this place of being numb in my walk with the Lord, but something just started blooming in my heart.”

Her unanswered questions began to grow into songs. As Jobe declared God’s goodness over her own circumstances, He began to transform her heart. “These raw things were coming out of my mouth, so I just started writing,” she shares. “I Will Sing,” written while she was still pregnant, became the first song she penned for this album. Jobe spent the next several months pouring out her emotions one track at a time, collaborating with friends, and eventually recording half of the album in Redding, California, and the other half in Nashville. She and her husband wrote together frequently, and Cody adds vocals on numerous tracks. In addition, Jobe co-wrote with acclaimed songwriters, including Jacob and Amanda Cook of Bethel Music, Brooke Fraser Ligertwood, Ben Fielding, Jason Ingram, Mia Fieldes, Martin Smith and Josh Silverburg, among others. In addition, she covered two songs that she claimed in the midst of loss: Jesus Culture’s “Miracles” and Elevation Church’s “Here As In Heaven.” Jeremy Edwardson (Jesus Culture, Bryan and Katie Torwalt), who helmed Majestic, produced the project. 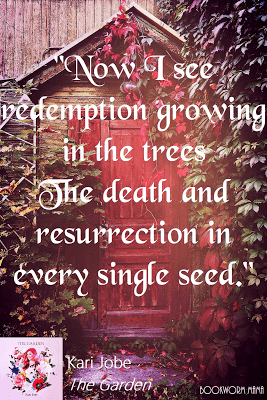 While songs like “Fall Afresh,” “Heal Our Land” and “Closer to Your Heart” reveal congregational anthems like many of the offerings that have defined Jobe’s career, most of The Garden’s 14 tracks speak to hope in the midst of loss, peace in the midst of uncertainty and God’s presence in the midst of pain. “Oh The Power” vividly recalls another garden where suffering took place, the Garden of Gethsemane. “Jesus went to a garden in His last moments to have intimacy with the Father. It was like He wanted to be surrounded with something that reminded Him of when there was no sin and there was no separation from God,” Jobe says, referencing the garden where mankind began—in Eden. It’s a heavenly space she hopes to invite listeners into with her new album, which, on a sonic level, feels like an overarching narrative backed by a sweeping cinematic score, meant to be savored from start to finish.

Today, Jobe and her family continue to discover restoration through glimpses of God’s goodness. “The healing that He’s been bringing to my family and the way that He’s met us in our pain, it’s made me realize how many people are going through really intense pain and disappointments and trials,” Jobe offers. “There’s a lot of people who have lost babies or family members out of traumatic experiences. My eyes have been opened to that in a whole new way.”

She’s also viewing her platform in a new light since giving birth to Canyon. “I feel more of a maternal instinct now in my worship leading, even declaring things over people,” she shares, adding, “At the end of the day, my favorite thing now is just to be on the floor playing with blocks and reading books. Nothing else really matters. If I just became his momma and a wife, I’m fine with that. I just feel more settled than I’ve ever felt in my life.”

In the time leading up to The Garden, Jobe has experienced both indescribable joy and unimaginable pain. Life and death, side by side. Yet, through it all, she’s found God to be inextricably faithful because she’s learned to trust the Gardner and the beautiful, unseen ways He tends to our hearts.

“Everyone who’s seen something grow out of the dust realizes God was up to something in the midst of pain and questions. He never promised that it would be easy or that it would be pain-free, but that He would never leave us or forsake us,” Jobe offers, adding, “I’m more aware of His presence than I think I’ve ever been. God has surrounded us with things that will be life-giving if we take a moment to realize it. God’s always at work in our lives. He truly does go before us and prepares the way for the journey ahead.”

Sometimes, worship CDs have to grow on me. Other times, I’m instantly in tune with the music and the lyrics and the artist uses both to lead me to the throne of grace. Kari Jobe’s new CD The Garden is definitely in that second category.

It’s clear – even before I read the story behind the CD – that the words come from deep in her soul. And they ministered down deep to mine. In particular, the song “I Will Sing” has been on repeat – either on the CD itself, on the YouTube official audio video, or in my head and on my lips. The words, the music, the passion in Kari’s voice – all of it meets where I am and where I need reminders of His hope and faithfulness. 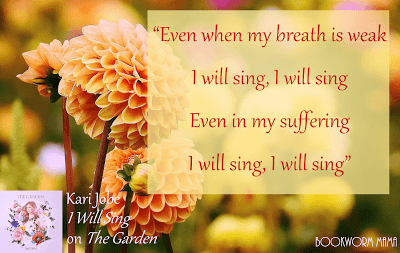 Another favorite song of mine from The Garden is “Heal Our Land”, its lyrics so timely for the Church today. Not directed at any specific nation but toward God’s people, His Church. Oh, how this song echoes my heart’s cry for us! 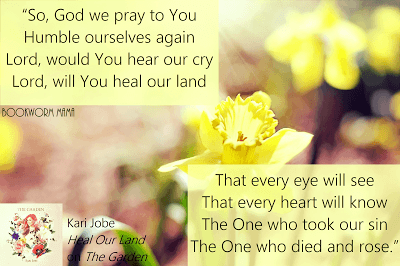 Other songs on The Garden include the title track as well as “Let Your Glory Fall”, “Lover of My Soul”, “Speak to Me” (another personal fave), “Fall Afresh”, “Miracles”, “Closer to Your Heart” (feat. Cody Carnes), “Oh the Power”, “The Cause of Christ”, “Here as in Heaven” (feat. Cody Carnes), “Come Alive” and “On the Throne”.

You can’t go wrong with any of the songs on this album. Each one resonates with grace and reverence, pointing us to the Author and Finisher of our faith, set against a backdrop of beautiful music that enhances the worship experience in every way.

I voluntarily reviewed a complimentary copy of this CD which I received via FlyBy Promotions. All views expressed are only my honest opinion.

FlyBy Promotions and Kari Jobe’s team have offered a copy The Garden to one of my readers (continental US/Canada only). As this is not directly sponsored by Reading Is My SuperPower, it is subject to its own terms and conditions, as listed below.

“Disclosure (in accordance with the FTC’s 16 CFR, Part 255:  “Guides Concerning the Use of Endorsements and Testimonials in Advertising”):  Many thanks to Propeller Consulting, LLC for providing this prize for the giveaway.  Choice of winners and opinions are 100% my own and NOT influenced by monetary compensation.  I did receive a sample of the product in exchange for this review and post.


What about you? What’s a worship song you put on repeat?

35 responses to “CD Review (and a Giveaway): The Garden by Kari Jobe”