I have a special treat for y’all today! Author Christy Barritt recently released the first book in a brand new series about Joey Darling, the worst detective ever. Well, today we get the chance to talk with Joey and learn a bit more about her story! 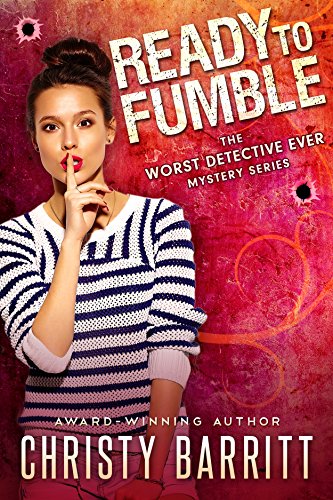 I’m not really a private detective. I just play one on TV.

Joey Darling, better known to the world as Raven Remington, detective extraordinaire, is trying to separate herself from her invincible alter ego. She played the spunky character for five years on the hit TV show Relentless, which catapulted her to fame and into the role of Hollywood’s sweetheart.

When her marriage falls apart, her finances dwindle to nothing, and her father disappears, Joey finds herself on the Outer Banks of North Carolina, trying to piece her life back together away from the limelight. A woman finds Raven—er, Joey—and insists on hiring her fictional counterpart to find a missing boyfriend. When someone begins staging crime scenes to match an episode of Relentless, Joey has no choice but to get involved.

Joey’s bumbling sleuthing abilities have her butting heads with Detective Jackson Sullivan and kindling sparks with thrill-seeking neighbor Zane Oakley. Can Joey channel her inner Raven and unearth whodunit before she ends up totally done in? And where is her father anyway? Can she handle fame, or is disappearing into obscurity the wiser option?

Hi Joey Darling! Welcome to the blog! Thanks so much for chatting with me!

Joey: Apples because one of my diet plans says they’re okay to eat.

Carrie: My diet plan I’m currently on has banished me from fruit for the next two months. I MISS MY APPLES. wail.

Joey: Winter because of forgiving jeans and layered tops. That wardrobe covers up how much I cheat on my diets by eating things other than apples!

Joey: Dogs because at least they pretend to listen to me talk. Cats only look annoyed when I start to ramble.

Joey: Coffee. Always coffee. Preferably coffee that someone else makes.

Carrie: Confession – I have never made coffee in my whole life.

Joey: Invincibility. Although vulnerability makes a good actress. So that’s a hard question. But let’s stick with invincibility because it would be me indestructible and that just sounds cool!


Carrie: You, invincible, would be pretty cool indeed!


If I snuck a peek in your bag right now (which I would never do, I promise!), what would it tell me about you?

Joey: Well, I’ve got breath mints. You always want breath mints when dealing with the public. Lip gloss is also great, just in case anyone sneaks a picture of you. Every woman always looks better with a little color on her lips. I also have a cellphone that I try not to be attached to. But I often fail. Like, I fail a lot. And, of course, there’s a picture of my dad. He disappeared without a single word to me four months ago, which is totally unlike him. I’m desperate to find him.


Carrie: Oh my goodness! I would be frantic if my dad disappeared. I hope you find him soon!!


You were the star of the hit TV show “Relentless” for five years. I know you recently had a fan try to hire Raven, the character you played, to find her missing boyfriend. Is that the oddest fan request you’ve received or have there been stranger ones?

Joey: My friend starred on a vampire show once and a fan tried to bite her . . . so at least that’s never happened!  Strangers have proposed to me. Someone got my face tattooed on their back. One girl had a nose job so she could look like me. Weird!


The title of your series by Christy Barritt is called “The Worst Detective Ever.” How do you feel about that?


Joey: Oh, it’s totally accurate. I’m a terrible detective—but I’m trying to be better! It’s really hard to live up to my alter ego, Raven Remington. Everyone thinks I’m going to be so perfect and smart and skilled—just like she is. But I’m not. My greatest skill is acting—and I plan on using that to my advantage.


Carrie: I learned several years ago that being perfect is highly overrated 🙂


You’ve got some interesting men in your life.  Namely, Detective Jackson Sullivan and Zane Oakley.  Tell us about Jackson and Zane.  Is there a bit of a love triangle going on there?


Joey: Insert sigh. What do I even say? I wish I was in a better place for coupledom, but I was in a very unhealthy relationship, which has left my self-confidence a bit precarious. Zane is my thrill-seeking neighbor. A surfer. Free spirited. He’s like the waves—always changing, always exciting, always fun. Then there’s Detective Jackson. He’s more like a rock—steady, predictable, dependable. He’s the kind of guy you want on your side when things go bad. If I was looking for a relationship and if Zane and Jackson were both interested, I have no idea what I would do. The wave or the rock? Who can make that choice?

Carrie: Hmm…Well… I would go for the rock. But that’s just non-adventurous me 😀


A lot of people know Raven Remington, your character on Relentless. But what’s something that few people know about you – Joey Darling?

Joey: I’m a daddy’s girl at heart. I vowed that I wouldn’t let fame change me, but it did. I fear that people only love me because of who they think I am. That when they really get to know me, they’ll be disappointed. That when they see how ordinary I really am, they just won’t care anymore.


Carrie: Rest in who you are, sweet Joey. Ordinary isn’t all that ordinary, anyway. You are loved, and you are treasured.


Again thank you so much for taking time to talk with me! 🙂 Before we say goodbye for today, tell us what‘s coming up next for you. And uh… can I have your autograph?

Joey: Of course. I love giving autographs, especially at the most awkward times (like during a police investigation, let’s say)! Stay tuned for more misadventures. Reign of Error comes out at the end of this month and then Safety in Blunders in March! I’ve got more gigs in the future too!


Carrie: Oh…. you weren’t in the middle of an investigation when I tackled you for this interview, were you? Ummm…. yeah. That would probably explain the … yeah. So sorry! 😀

Christy Barritt is giving away a copy of Ready to Fumble (paperback or ebook, winner’s choice) to one of my readers! (Paperback is open to US only) Enter via the Rafflecopter form below. Giveaway is subject to Reading Is My SuperPower’s giveaway policies.


What about you? What is something that few people know about YOU?