Today I welcome J. New to the blog for a chat. Her Vintage Mysteries are described as “perfect for fans of Golden Age Murder Mysteries, Cozy Mysteries and British Amateur Sleuths.” I have not personally read them yet (though her latest release is on my TBR list!!) but the author assures me they are clean reads with no profanity, etc. 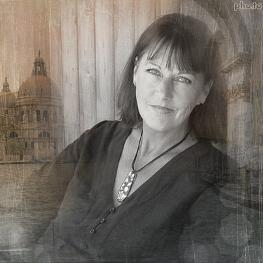 J. New is the British author of Vintage Mysteries with a difference. A voracious reader and writer all her life, she took her first foray into publishing in 2013 and has never looked back.  Originally from a small picturesque town in Yorkshire, she relocated in 2007 and currently resides with her partner and an ever expanding family of rescue animals.

She has an eclectic reading taste, but particularly loves murder mysteries set in past times, where steam trains, house staff and afternoon tea abound, and surmises she was born in the wrong era as she has a particular aversion to housework and cooking.

She also has an impossible bucket list: to travel on the Orient Express with Hercule Poirot, shop in Diagon Alley with Sirius Black, laze around The Shire with Bilbo and Gandalf, explore Pico Mundo with Odd Thomas and have Tea at the Ritz with Miss Marple.

Her wish is to retire to her own quintessential English cottage surrounded by her rescue animals, to write full time. 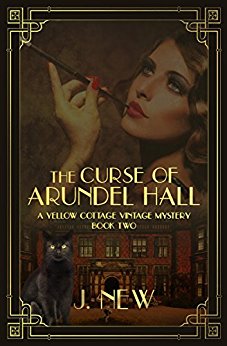 One ghost, one murder, one hundred years apart. But are they connected?

Ella has discovered a secret room in The Yellow Cottage, but with it comes a ghost. Who was she? And how did she die? Ella needs to find the answers before either of them can find peace. But suddenly things take a nasty turn for the worse.

Ella Bridges has been living on Linhay Island for several months but still hasn’t discovered the identity of her ghostly guest. Deciding to research the history of her cottage for clues she finds it is connected to Arundel Hall, the large Manor House on the bluff, and when an invitation to dinner arrives realises it is the perfect opportunity to discover more.

However the evening takes a shocking turn when one of their party is murdered. Is The Curse of Arundel Hall once again rearing its ugly head, or is there a simpler explanation?

Ella suddenly finds herself involved in two mysteries at once, and again joins forces with Scotland Yard’s Police Commissioner to try and catch a killer. But will they succeed?

Hello, Ms. New 🙂 Welcome to the blog! I’m so honored to be chatting with you today!

J: Hi Carrie, it’s a real pleasure to be here, thank you for inviting me 🙂

J: Apples, the reason being I used to be plagued with headaches/migraines and a severe pain in my left eye, which when you’re writing is hugely frustrating to say the least. I decided to do a bit of research as I wanted a healthy, non-pharmaceutical aid if I could find one, and I discovered apples are a source of estrogen; I had wondered if my hormone levels were skewed. I started on 100% bought apple juice, and then when I discovered it worked, I started to juice my own. I’ve rarely had a headache since and the pain in my eye has all but gone, even when I’m putting in some mammoth hours writing and editing.

J: While I love the look of winter, especially during the festive season when the snow is on the ground, and the robins are flitting in and out of the snow-laden hedgerows, I much prefer summer as I can get outside and tend my garden. To be honest my favourite season is spring, as it’s a time of new growth and birth. Spring lambs in the fields, buds on the trees, new shoots pushing up through the soil, there’s an air of expectation and magic about it, which I find beautiful. (I think I must be channeling my main character Ella Bridges here 🙂 )


Carrie: Spring really IS so beautiful, isn’t it? But then, I think all seasons have their own bit of magic and beauty. (Winter is still my fave though lol)

J: I’m an animal lover full stop, but dogs have a very special place in my heart. We’ve always had dogs in my family and each one has been a family member in their own right. They are loving and loyal and incredibly intelligent, I can’t imagine my life without dogs in it. When we moved in 2007, we ended up in a place where there were many stray dogs, who, through no fault of their own had ended up on the streets, barely surviving and suffering terribly, it was heartbreaking. So we became involved in their rescue, rehabilitation and re-homing. My first book; A Canine Companion: Inspirational words and stories of rescue, I wrote and illustrated purely to help raise much needed funds to keep the rescue charity going. We’ve rescued many creatures besides dogs, including tortoises and buzzards, and once I gave heart massage to a fledgling swallow, that had fallen from its nest and was caught by one of our dogs. Incredibly it lived and fledged successfully a few weeks later. It was an amazing experience. We also rescue cats, and currently have nine that live us and the dogs, so my house is pretty full as you can imagine.


Carrie: Oh my! I think our house has been taken over with the ONE dog we have lol!

J: Coffee in the morning, I love a good cappuccino, and tea in the afternoon.


Carrie: Hot chocolate any time of day for me 😀

J: Healing. There’s nothing worse than watching someone you love, or a creature suffering and not being able to do anything about it.


Carrie: So true. The world we live in could do with a bit of healing too.

J: Actually, as a result of some conversations in writing groups I belong to, I’ve been exploring fan-fic recently and have just finished the series (so far) of G. Norman Lippert’s James Potter books, which I highly recommend for magic and fantasy fans, especially those that love Harry Potter. I also love Robin Hobbs’ Ship of Magic and Fitz and the Fool series. Jody Taylor’s Chronicles of St. Mary’s are excellent historical time travel books, which are also very funny. I’m also a fan of Estelle Ryan’s Genevieve Lenard series. I also have everything Terry Pratchett ever wrote, and am working my way through re-reading them. I think I’ll leave it there, I can go on about books forever given the chance 🙂

Carrie: You are in good company. Most of us around here can go on about books forever … and then some!

J: I write at the kitchen table, with animals in the house I find it’s always best to be around in case I’m needed, and I like the company. It also helps in case the dogs need to go out, or the cats decide to use the furniture as scratching posts 🙂 It’s the best place for the wifi to work, and as I tend to research as I write this is essential.


You say that you have an impossible bucket list: to travel on the Orient Express with Hercule Poirot, shop in Diagon Alley with Sirius Black, laze around The Shire with Bilbo and Gandalf, explore Pico Mundo with Odd Thomas and have Tea at the Ritz with Miss Marple.  If you were allowed to pick only ONE of these to complete – and you had to abandon the rest – which one would it be and why?


J: Definitely exploring Diagon Alley, because, with the exception of Pico Mundo which I’m sure is similar to a lot of real places, all the others are real and can be visited. Diagon Alley is pure imagination and filled with magic and sights you would never see in the real world.


Carrie: I would pick that one too, easily. Such wonder there! Such imagination-filled possibilities!


I don’t believe in ghosts, but I do love a good ghost story! Tell us about the gift that Ella inherits. 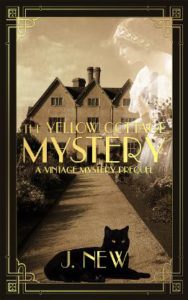 J: When Ella was a child she visited Linhay Island and fell in love with The Yellow Cottage, many years later she returns as an adult and buys it. (this is the FREE short story prequel to the series available on my website, The Yellow Cottage Mystery) But the gift the previous owner had, was also passed on to Ella along with the house; her ability to see ghosts. But it’s not every ghost, just those that need her help in some way. Ella needs to unravel the mysteries of their lives and solve the puzzle in order for them to be able to move on and find peace. The series has been dubbed “Miss Marple meets The Ghost Whisperer”, which I find suits it very well; they’re set in England in the 1930’s.


What do you most want readers to take away from The Curse of Arundel Hall?

J: I write what I like to read, and I read primarily to be entertained. I sincerely hope my readers will be entertained by my books, that they can immerse themselves in the story for a while, following the clues with Ella and solving the mysteries alongside, while escaping from the real world for a time. I also hope they like them enough to follow the series, and perhaps recommend them to friends. 🙂


Again thank you so much for taking time to talk with me! 🙂 Before we say goodbye for today, tell us what‘s coming up next for you.

J: I’m currently plotting book 3 in The Yellow Cottage Mystery series, but this one is a little bit special. Since the first book, An Accidental Murder, was published, a lot of the reviews and correspondence I’ve received have all mentioned how much they love one particular character, so my next book is his tale. Where he came from, and the adventures and mysteries he was involved in before he found himself at The Yellow Cottage. I’m very excited about it and I hope readers will be too. 🙂 I also have an almost completed idea for book 4, and some half formed ideas about a new mystery series set in a Victorianesque style England with steampunk overtones, although that’s a bit further in the future.

Thank you so much for hosting me today; it’s been great fun with some great questions 🙂

What about you? If you got to pick one item on Ms. New’s bucket list to complete, which would you choose?