Posted February 22, 2017 by meezcarrie in giveaway, Suzanne Kamata, YA / 11 Comments 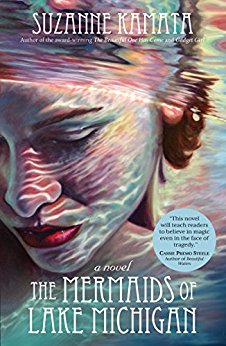 Elise Faulkner is more at home in the waters of her beloved Lake Michigan than on land where her beauty queen mom is always on her back about her lack of a social life; her sister is dating the boy of her dreams; her favorite penpal–the one who wrote about mermaids in Ghana–has gotten married and ended their correspondence; and no one’s allowed to talk about her glamorous great-grandmother, the deep-sea wreck diver.

Elise is biding her time with books until she can flee.

But then crazy Chiara Hanover pops into her life, as does Miguel, a mysterious carnival worker whose dark future has been predicted by a gypsy.

“Suzanne Kamata’s new novel, The Mermaids of Lake Michigan, is a beautiful story about a teenage girl who must learn to balance her idealism and belief in mermaids with the harsh realities of growing up and trying to find people to love and trust. A page-turner set in the unstable years of the 1970s, I devoured it in one sitting. It brought back memories of my own adolescence and took me beyond, in that way all good novels do, into the wonderings of circumstance and the choices we would make if faced with hard decisions. Suitable for teens and adults alike, this novel will teach readers to believe in magic even in the face of tragedy.” — Cassie Premo Steele, author of Beautiful Waters

“I’d had a taste of adventure and I knew I wanted more… In the meantime, I was under house arrest.“ 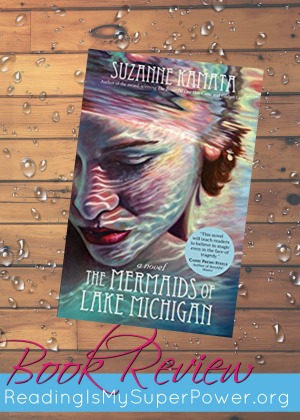 The Mermaids of Lake Michigan did not at all play out the way I expected. And that’s not really a bad thing. Just different 🙂

I had in mind that I’d be reading something a la Sarah Addison Allen and Lost Lake.  And while there IS the teeniest bit of magical realism at the end, it’s really not the focus of the book at all. Yet, the theme of mermaids carries on at a deeper level than first anticipated as well.

Though not a literal mermaid, Elise is certainly a fish out of water among her family and peers. Later, as she sheds her figurative fins for walking legs, she – much like the most famous of mermaids – discovers life “on land” isn’t quite as perfect as she’d imagined.

This is a short novel, a quick read, but it never feels rushed. The author’s writing style flows smoothly, and she keeps the reader engaged with the story at every turn. Each character that Elise encounters has a purpose, whether it’s a brief meeting or a family member. These characters, as well as excellent examples of foreshadowing, all serve to advance the plot and to add more layers to Elise’s character.

No spoilers … but I felt a certain scene toward the end of the book seemed out of place. I get why it’s in there, but it threw me. And it just didn’t fit with the tone of the story up until that part. Without it, I think the ending would have been just as poignant. Maybe even more so.

Bottom Line: If you’re looking for a coming-of-age story that appeals to adolescents, young adults, and less-young adults, The Mermaids of Lake Michigan proves a compelling choice. It takes place around the 1970s so it’s not really contemporary, not really historical, but somewhere in between. Different than I expected at first glance, it continued to take me by surprise but overall I enjoyed this read.

Reviewer’s Note: Readers may want to be aware that there is some foul language in this book, as well as some implied (but not explicitly described) scenes of an intimate nature.

Suzanne Kamata was born and raised in Grand Haven, Michigan. She is most recently from Lexington, South Carolina, and now lives in Tokushima Prefecture, Japan with her husband and two children. Her short stories, essays, articles and book reviews have appeared in over 100 publications including Real Simple, Brain, Child, Crab Orchard Review, and The Japan Times. Her work has been nominated for the Pushcart Prize five times, and received a Special Mention in 2006. She is also a two-time winner of the All Nippon Airways/ Wingspan Fiction Contest, winner of the Paris Book Festival Award, and winner of the Half the World Global Literati Award for the novel.

Thanks to the author, the publisher, and TLC Book tours I have a copy of The Mermaids of Lake Michigan to give away to one of my readers (US/CAN). Enter via the Rafflecopter form below. Giveaway is subject to Reading Is My SuperPower’s giveaway policies, which can be found on the Disclosure and Policies page.


What about you? What’s the last book that turned out differently than you expected? (No spoilers!)

Follow along with the TLC Book Tour to see what others are saying.

11 responses to “Book Review (and a Giveaway!): The Mermaids of Lake Michigan by Suzanne Kamata”