As part of the Litfuse Blog Tour for Door to Freedom, I am so honored to have the chance to chat with author Jana Kelley. 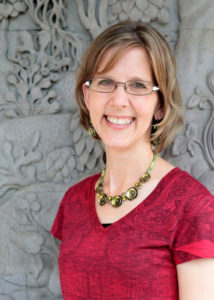 Jana Kelley is a Texan who hardly ever lives in Texas. Raised in Southeast Asia, Jana developed a love for cross-cultural living early in life. Her love for writing came soon after. Jana returned to Texas to attend East Texas Baptist University. She and her husband married a month after she graduated and by their second anniversary, they were living in a remote African town. After thirteen years living in Africa and the Middle East, Jana, her husband, and their three boys, moved to Southeast Asia where they currently live. Jana has authored two novels and two devotional books. You can learn more about Jana at www.JanaKelley.com. 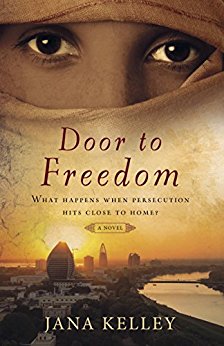 “It’s rough and it’s smooth. It’s dark and it’s light. It’s a masterpiece. It’s us. Here in Sudan. We are scared of it and drawn to it. There is an open door, and there is much opposition.”

In the dusty, Islamic country of Sudan, Mia, who is raising her family in a Muslim country, has learned to boldly share her faith. Rania, the daughter of a wealthy Sudanese Arab, seeks to find the reason for her sister’s sudden disappearance. Mia holds some of the answers, but both women quickly discover they must each walk through their own doors to freedom—the freedom that only comes when you trust God’s sovereignty more than man-made security.

Part of New Hope® Publishers’ line of contemporary missional fiction, Door to Freedom, the sequel to Side by Side, opens the reader’s eyes to modern-day persecution and the life of Muslims in Sudan. Based on real-life events, Door to Freedom also reveals some of the struggles that Christians face when living under Islamic law. The reader will be inspired to pray for those who are persecuted for their faith as well as for the salvation of the persecutors.

Hi Jana! Welcome to the blog! I start all of my guests out with a fast four:

Jana: Apples, they are less messy than oranges. They do require more work, though, since I have to cut them up. I don’t like to eat them whole…too messy. I’m sensing a theme here. I guess I don’t like messy fruits. I like the taste of apples better too. But that being said, I live in Malaysia and February is Chinese New Year month, so I have an entire box of honey mandarins sitting in my fridge: a favorite CNY delicacy.


Carrie: But don’t you miss the snow just a little??

Jana: Hmmmm, probably cats, but I have a dog. I guess both. But really, cats. I like that they sort of take care of  themselves. On the other hand, I love the welcome that I get from my dog every time I come home. She greets me at the door with lots of tail wagging, like she’s been waiting for this moment all day. So sweet!


Carrie: My dog Zuzu has decided to ignore everything you just said about cats and focus instead on the delightful things you said about your own dog 😉

Jana: Coffee in the morning. Most definitely coffee…in the morning. But later, I’ll drink tea all day long if I have a good book or someone to chat with. I like hot drinks because they force me to sit down and relax and drink slowly. Deep breaths. Enjoy!

Jana: I’d have the ability to speed read (and still retain the information). I am a book junkie and I love to collect books of all kinds; but I have a hard time getting them all read. I’d like to be able to read books as fast as I can buy them.


Carrie: Oh that would be lovely. I would also then like the ability to review books as fast as I read them!

Jana: My favorite book character from childhood is Betsy from the Betsy-Tacy books by Maud Hart Lovelace. I loved reading about the friendship of Betsy and Tacy and Tib. I remember reading them at a time when my family lived in a small town in Indonesia, Southeast Asia. I only had two friends in that town and they were from a very different culture than me. But after reading one of the Betsy books, I appreciated that at least I did have those two friends (just like Betsy) and I started being more proactive about reaching out to them. So Betsy, a fiction character from Minnesota in the early 1900s reached out to me, a little American girl in Southeast Asia, and gave me the courage to reach out to my Indonesian friends. That’s why I like Betsy. And now that I wrote this little tribute, I’m going to go to the library to check those books out!

Jana: Second to the times that writing drives me to search the Scriptures and study what the Lord says about various topics is my interest in Google research. What would we do without Google? Write boring, one-dimensional books I guess. I have researched birding in Sudan, WW2 internment camps for women, and how to tell one’s fortune using coffee grounds.  Perhaps the weirdest Google search I did was on chemicals that can be dropped from the sky that cause apathy. Did you know there is such a thing? Me either. But there is. Thanks Google.

Carrie: I feel like i should now run that NBC jingle for those “The More You Know” spots they ran all the time in the 80s and 90s. Do they still do those? I never watch TV anymore. To the Google!! lol.


Describe your main characters and tell me who you would cast in their roles if Hollywood wanted to produce Door to Freedom as a movie!


Jana: Mia-A blonde-headed young wife and mother who teeters between joy and angst. I think Candace Cameron-Bure would be the perfect actress to be Mia. She is spunky but genuine and, as a person, seems like she would be able to play a convincing version of Mia!


Carrie: I love both of these actresses! Great choices! 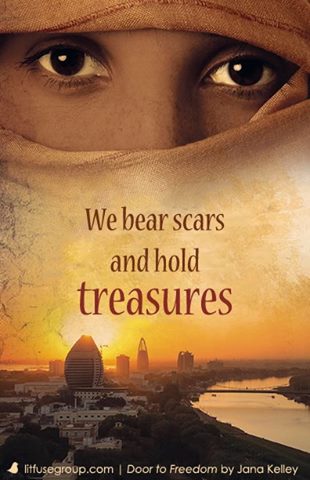 What surprised you about Door to Freedom or your characters as you wrote their story?


Jana: Rania’s resilience in the face of difficult situations surprised me the most. In the beginning, Rania is quite shy and compliant. She grows in personal strength as the story unfolds.

The other surprising character is Jamal. Things don’t turn out the way a reader might think they should. This came as a surprise to me too as I wrote his character.


What do you most want readers to take away from Door to Freedom?

Jana: I would like readers to come away with a better (perhaps more loving?) understanding of Muslims and of the universal need for Jesus.


Jana, thank you so much for taking time to talk with me! 🙂 Before we say goodbye for today, tell us what‘s coming up next for you.

Jana: As DOOR TO FREEDOM releases, I’ll be busy editing the third book of the series. I’m excited about how this sequel will wrap up the stories that began in the first book SIDE BY SIDE. I have also dug up old letters and journals from a time in my life when my husband and I lived in a little country in East Africa. I’m hoping to use the memories and information to write a devotional series and perhaps plan the backdrop for a new series. I guess we’ll see what happens!

What about you? What’s the strangest thing YOU’VE ever googled?