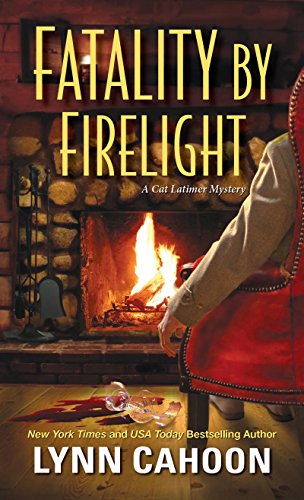 Cat Latimer’s Colorado bed-and-breakfast plays host to writers from all over. But murder is distinctly unwelcome . . .

To kick off a winter writing retreat, Cat and her handyman boyfriend, Seth, escort the aspiring authors to a nearby ski resort, hoping some fresh cold air will wake up their creative muses. But instead of hitting the slopes, they hit the bar—and before long, a tipsy romance novelist named Christina is keeping herself warm with a local ski bum who might have neglected to tell her about his upcoming wedding.

Next thing Cat knows, her uncle, the town sheriff, informs her that the young man’s been found dead in a hot tub—and Christina shows up crying and covered in blood. Now, between a murder mystery, the theft of a rare Hemingway edition, and the arrival of a black-clad stranger in snowy Aspen Hills, Cat’s afraid everything’s going downhill . . . 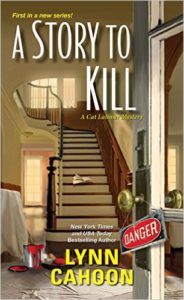 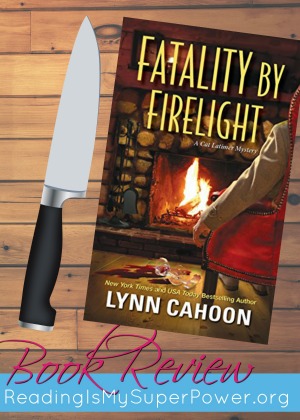 So… before I talk about how much I love this book (which I do), I have to mention the cover.  I adore this cover! BUT… it really doesn’t fit with the story. I thought that was odd but I’m so in love with the cover – and with the story – that it didn’t bother me. BUT THEN IT HIT ME. Maybe. You guys. What if the covers aren’t supposed to go along with the stories but instead are CLUES ABOUT WHAT HAPPENED TO CAT’S EX-HUSBAND?!?!?! I’m freaking out a little bit (in a good way).

Or – you know – maybe it’s just that the cover design people didn’t read the book haha. Or… everyone but me already knew this about the covers.

Either way, it’s a pretty cover 🙂

Ok. Back to the story.

Fatality by Firelight is the second book in the Cat Latimer mystery series by Lynn Cahoon, and I enjoyed it even more than I did the first one.  My fave characters all returned (Cat, Shauna, Seth, Uncle Pete) and a whole new batch of retreaters show up for the week. Poor Cat. Maybe one day she’ll get a nice, boring, “normal” writers’ retreat but it’s probably not likely anytime soon. Not as long as Cahoon continues with the series lol.

This case takes several twists and turns, and just about the time I thought I had everything figured out… I didn’t. And then I did. And then I didn’t again. And then I did. But woven through the story is the mystery I’m most interested in – what really happened to Cat’s late ex-husband and what other clues has he left behind in their former house? I’m so loving this continuing story arc. It’s nice because the individual or “new” mysteries in each book are wrapped up by the end but this thread with her late ex-husband keeps getting more layered and more intriguing.

Bottom Line: Another terrific offering from Lynn Cahoon! You may not want to read it while you’re hungry though because you’ll find yourself craving all the delicious food cooked by Shauna. (Don’t ask me how I know this.) Well-plotted with engaging characters and a cozy setting, Fatality by Firelight is the perfect choice for a night in by the fire or a weekend escape.


(I voluntarily reviewed a complimentary copy of this book which I received from the publisher via Netgalley. All views expressed are only my honest opinion.)

Reviewer’s Note: Readers may want to be aware that there are some mild swear words scattered infrequently throughout this novel. 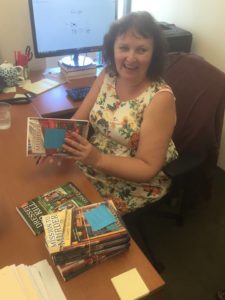 Lynn Cahoon is the author of the NYT and USA Today best-selling Tourist Trap cozy mystery series. Guidebook to Murder, book 1 of the series won the Reader’s Crown for Mystery Fiction in 2015. She’s also pens the recently released, Cat Latimer series. A STORY TO KILL, book 1, came out in mass market paperback September 2016.She lives in a small town like the ones she loves to write about with her husband and two fur babies. Sign up for her newsletter at www.lynncahoon.com


Other Books by Lynn Cahoon

This giveaway is hosted by Great Escapes Virtual Book Tours, not Reading Is My SuperPower. Follow along with the tour to see what others are saying about the book!

14 responses to “Book Review (and a Giveaway!): Fatality by Firelight by Lynn Cahoon”