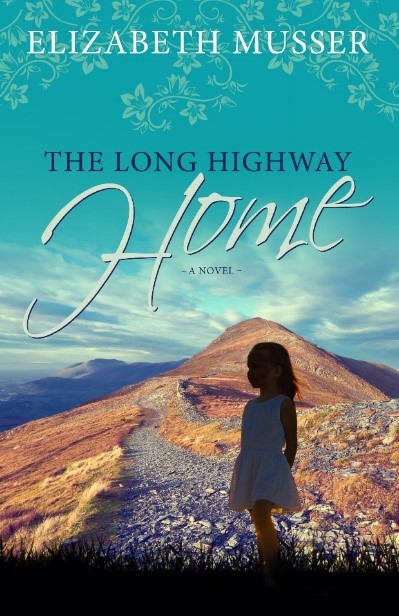 When the doctor pronounces “incurable cancer” and gives Bobbie Blake one year to live, she agrees to accompany her niece, Tracie, on a trip back to Austria, back to The Oasis, a ministry center for refugees that Bobbie helped start twenty years earlier.

Back to where there are so many memories of love and loss.

Bobbie and Tracie are moved by the plight of the refugees and in particular, the story of the Iranian Hamid, whose young daughter was caught with a New Testament in her possession back in Iran, causing Hamid to flee along the refugee Highway and putting the whole family in danger.

Can a network of helpers bring the family to safety in time? And at what cost?

Filled with action, danger, heartache and romance, The Long Highway Home is a hymn to freedom in life’s darkest moments.

The Long Highway Home is set in 2005, at the height of the riots in France, but its theme is oh-so-timely today. The story follows several main characters – Bobbie, Tracie, Stephen, Hamid, Amir, and Rasa – as well as the secondary characters these six encounter on their respective journeys. The text shifts from first person to third person, depending on which character’s perspective we are reading, but the transitions are clearly indicated and easy to follow.

One of my favorite quotes in the novel comes from Bobbie’s mentor and prayer partner, Peggy – a ninety-two-year-old former missionary whose personality and role in this story I absolutely adore. Anyway, she says this:

So much of the time, the story God is writing goes on behind the earthly scene, somewhere in the heavenlies. But every now and then the Lord pulls back a curtain-slice of the sky and we get to see the bringing together of all the plot lines in real time!

That’s what The Long Highway Home is, at its heart. A bringing together of the plot lines of a refugee’s story. It’s not a political statement. It’s not a religious statement. It’s a beautiful picture of how Isa [Jesus] redeems and rescues, with plot lines simultaneously playing out in Turkey, in the Netherlands, in Iran, in Atlanta, and in Austria. It’s an inspiring portrait of the selfless individuals who work behind the scenes in many cases to help refugees find hope as well as freedom. And it’s a heart-clenching reminder that, while following Jesus is very costly to so much of the world’s population, He is very worth it. “Not everyone had made it safely out of Iran. But everyone has made it safely home.” 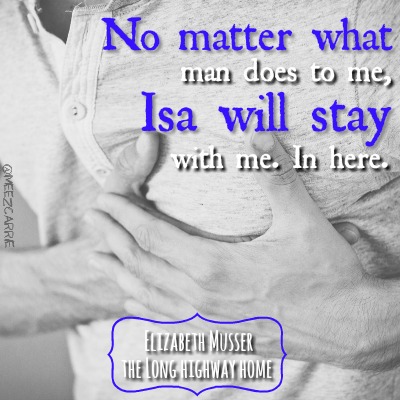 Bottom Line: The Long Highway Home is a feast for the senses, the emotions, and the soul. It will break your heart and soothe it again, but it will not leave you the same person you were when you began reading. The characters become real, become friends, and you aren’t quite ready yet to leave them at the end. Be warned – there is “ugly cry” on the horizon if you’re prone to such things. And no matter where you stand on the refugee debate, this story and its people are for you.

ELIZABETH MUSSER writes ‘entertainment with a soul’ from her writing chalet—tool shed—outside Lyon, France.  Elizabeth’s highly acclaimed, best-selling novel, The Swan House, was named one of Amazon’s Top Christian Books of the Year and one of Georgia’s Top Ten Novels of the Past 100 Years.  All of Elizabeth’s novels have been translated into multiple languages. The Long Highway Home has been a bestseller in Europe.

For over twenty-five years, Elizabeth and her husband, Paul, have been involved in missions’ work in Europe with International Teams.  The Mussers have two sons, a daughter-in-law and three grandchildren who all live way too far away in America. Find more about Elizabeth’s novels at www.elizabethmusser.com and on Facebook, Twitter, and her blog. See photos from scenes in The Long Highway Home on Pinterest. Purchase The Long Highway Home on amazon.


Other Books by Elizabeth Musser

Elizabeth is giving away The Long Highway Home! Comment on this review and then head over to her fantastic interview to claim 5 extra entries on the Rafflecopter form! 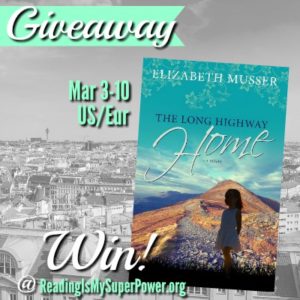 31 responses to “Book Review (and a Giveaway!): The Long Highway Home by Elizabeth Musser”