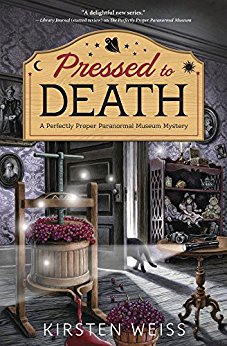 Paranormal museum owner Maddie Kosloski thinks she has the perfect paranormal exhibit for the harvest festival—a haunted grape press. But before she can open the exhibit, she’s accused of stealing the antique press. And when her accuser is found murdered, all eyes turn to Maddie.

Solving the crime is the last thing on Maddie’s mind, but her mother insists she investigate. Does her mother have a secret agenda? And why has the local charity, Ladies Aid, seemingly gone gangster?

In this light, cozy mystery, haunted houses, runaway wine barrels, and murder combine in a perfect storm of chaos. Facing down danger and her own over-active imagination, Maddie must unearth the killer before she becomes the next ghost to haunt her museum. 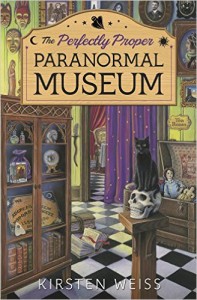 Pressed to Death takes us back to San Benedetto and Maddie and her paranormal museum. In this book, it seems everyone has a secret – an element which adds intrigue to the mystery and the overall mood. With so many secrets floating around, narrowing down a murderer proves more difficult than it first appears. The murder mystery is well-plotted and will keep you guessing, as well as looking over your shoulder for rogue Buicks and falling wine barrels.

The hint of romance from book one carries over into Pressed to Death, and I’m still not sure who I prefer for Maddie – Mason or Detective Slate. After the events in this book, I’m leaning toward Slate with whom Maddie has a definite attraction/connection, but Mason could easily redeem himself and then I’d be back to square one. I’m very curious as to how all of this will play out in the next book.

One of the things I really like about this series is the dual mysteries – one present day, one historical – to be solved. In this book, however, the historical mystery felt like more of an afterthought, the investigating tacked on nearly at the end and somewhat anticlimactic.

Bottom Line: While this is a well-written and nicely paced mystery, I didn’t care for it as much as I did the first book in this series (which I reviewed exactly one year ago today). Some plot points and character decisions just didn’t make sense to me or felt weak in general. However, Maddie is a likable character and tagging along with her on her investigations is enjoyable. I am still eager for the next book – to see how events from Pressed to Death affect the rest of the series.


Reviewer’s Note: Readers may want to be aware that this book does contain some mild cursing. 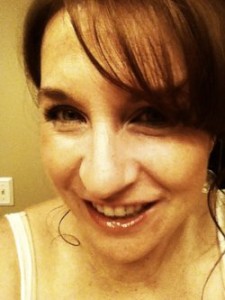 Kirsten Weiss grew up in San Mateo, California. After getting her MBA, she joined the Peace Corps, starting an international career that took her around the fringes of the defunct USSR and into the Afghan war zone. Her experiences abroad not only gave her glimpses into the darker side of human nature, but also sparked an interest in the effects of mysticism and mythology, and how both are woven into our daily lives.

She writes paranormal mystery and suspense, blending her experiences and imagination to create vivid worlds of magic and mayhem.

Kirsten has never met a dessert she didn’t like, and her guilty pleasures are watching ghost Whisperer re-runs and drinking good wine.

15 responses to “Book Review (and a Giveaway!): Pressed to Death by Kirsten Weiss”