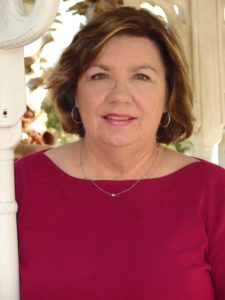 I am so honored to welcome Barbara Cameron to the blog today!

Barbara Cameron has a heart for writing about the spiritual values and simple joys of the Amish. She is the best-selling author of more than 40 fiction and nonfiction books, three nationally televised movies, and the winner of the first Romance Writers of America Golden Heart Award. Her books have been nominated for Carol Awards and the Inspirational Reader’s Choice Award from RWA’s Faith, Hope, and Love chapter. Barbara resides in Jacksonville, Florida.

Her newest novel Home to Paradise, which released February 21st, is the much-anticipated conclusion to the Coming Home series. 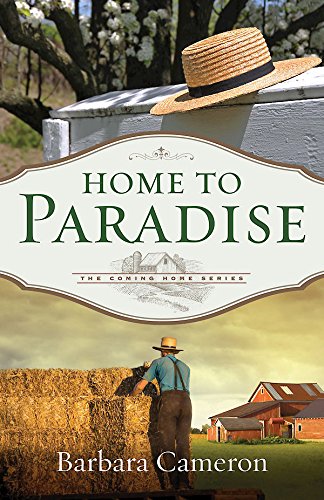 Rose Anna Zook has watched her two older sisters marry two Stoltzfus men and has always thought she and John, the third Stoltzfus brother, would marry, make a home together, and have children.

But John has other ideas.

He’s enjoying his Rumschpringe in the Englisch world a little too much and isn’t interested in returning to the Amish community—especially to marry.

Rose Anna is determined to bring her man back into the Amish fold. John is equally determined to live his life free and unencumbered.

Who will win this battle of wills? Will love prevail?

Hi Barbara! Welcome to the blog. It’s an honor for me to chat with you 🙂  Let’s get the most important question out of the way first….

Barbara: Dogs, definitely. My dad was an animal lover so I think we had every kind of pet you can have from dogs to cats to hamsters. But dogs quickly became my favorite. I had several Pekingeses because Dad had a friend whose parents had emigrated here from China and they owned them. I loved those little dogs with the smooshed in faces. We had one that the kids grew up with and I thought I’d have that breed forever.

Then one day my daughter visited the local humane society for a report for her senior high school English class. “Mom, there’s this amazing dog here. You’ve got to come see her.”

I drove out there and met Sarah, the most amazing Chihuahua. She greeted me like a long lost friend, “talking” to me and grinning at me. She jumped into my arms when the staffer opened her cage and I knew I had to have her. The woman at the front desk asked me if I’d seen the note on her cage that said she snapped at small children. I joked that I did, too, and got a frown. Apparently Sarah had gone home with a family that had a little boy right after she’d been spayed. The front desk person admitted that she’d had reservations about the little boy. Sure enough, Sarah was returned the next day.

But I had no small children and I didn’t think the dog had been the problem. So I took Sarah home and sure enough, she not only didn’t snap at small children – she kissed them and “talked” to them and even climbed into the stroller with one toddler to meet her. 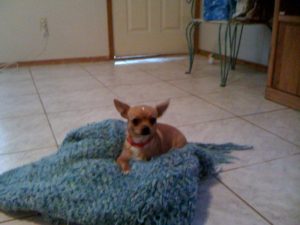 That dog led me to love the breed. Each one is different but they are fiercely protective of their owner and amazing companions. I’ve had a half dozen of them since and fostered quite a number of them for a local rescue.

I’ve attached a photo of one of my current “pack” – Zoe, called Cujo by one of my vets. Zoe did not like the vet at her first meeting because the woman walked into the room and asked me to put her down for the exam. Zoe was quite comfortable being snuggled in my arms … Anyway, Zoe is the alpha dog of the house and would push me around if she could.

Right now all three are sleeping in their beds in my office just a few feet from me and they’re great company as I write.

Carrie: Oh I love this! What a cutie! Our dog Zuzu was adopted briefly from a local humane society and returned before she adopted us. Every day of the past nine years, I’ve wondered how someone could not love this sweet dog… but I guess God knew her forever home was with us instead.


Who is your favorite book character  from childhood?


Barbara: It’s got to be Jane Eyre. I first read the book when I was about twelve and fell in love with her spirit and her loving kindness. I wore out several copies of that book and loved being able to teach it when I later became a college English instructor.

Carrie: Jane is such a fantastic heroine. Mr. Rochester, I could often do without. But Jane is wonderful!

Writing spaces are as diverse as authors and books. Where is your favorite space to write?

Barbara: I write in a fairly large room we call a Florida room. That’s a sort of bonus room. It’s large enough for two desks and a big bookcase and the required three dog beds. Oh, and a treadmill I stare at more than use. My two grown children and four grandchildren think I collect lighthouses so there are lots of them placed around the room. I work on a laptop – I began my career as a copy kid at my local newspaper and later became a reporter and magazine editor so I’ve always composed directly on a typewriter then later, a computer. Reporters were fired if they composed more than a paragraph with pen and paper so I’m a pretty fast typist but a slow writer. I can only manage two books a year most of the time.


Who would you cast as your main characters if Home to Paradise were made into a movie?


Barbara: This is actually a pretty interesting question. I had three movies made from my early work that were made for rental in video stores – a new thing back in the 1990s. The movies were later shown on HBO-Cinemax’s Colors of Love series and were titled The Garnet Princess, Make Mine Chartreuse, and Indigo Autumn. I co-authored the first two with my best friend, Eva Jones. Anyway, the producers never asked us for casting suggestions … but they had some pretty good stars in them – mostly from the popular TV soap operas of the time.

So, if I were to cast Home to Paradise, my latest book for a movie I’d pick Chris Hemsworth and Elizabeth Banks.


What surprised you about Home to Paradise or your characters as you wrote their story?


Barbara: Every book has a tendency to surprise me. I used to be more of a plotter but the past few years I’ve leaned more toward being a pantser than a plotter. Pantsers like to write by the seat of their pants. I do a little of both, plotting and not planning too far ahead and letting things go where my characters take me.

In Home to Paradise John is enjoying his time in the Englisch world a little too much and I didn’t think he and Rose Anna would end up with each other. John also is a pretty traditional Amish guy and thinks he has to have a stable home for them. Well, both John and I get surprised … I can’t tell you more or I’d ruin it for you.


What do you most want readers to take away from Home to Paradise?

Barbara: I feel there is always hope if we put our faith in God: hope for joy and peace and love in our world. And I want my readers to have a few hours of rest and relaxation. Life is just so busy these days.

where Rose Anna had lived all her life it was warm. A fire crackled

in the hearth, the only sound in the room.

Rose Anna glanced around the sewing room. Usually she and

her three schweschders sat chatting and sewing with their mudder,

sometimes singing a hymn as they worked. Today it was just her

She sighed. “So here you sit with your old maedel dochder,

She knotted a thread, clipped it with scissors, and squinted

as she rethreaded her needle. “I feel like one,” she said, pouting a

little. “Both of my schweschders are married and so are lots of my

friends. I have been a newehocker at so many weddings!” She made

a face as she began stitching on her quilt again.

The three Zook schweschders were often confused for each

other because they looked so much alike with oval faces, big blue

eyes, and hair a honey blonde. They’d been born just a year apart

so they’d grown up close. Rose Anna was the youngest—something

“Mary Elizabeth, it’s gut to see you. Kumm, sit by the fire and

get warm. You look cold.”

She leaned down and kissed her mudder’s cheek. “Lavina’s on

Linda brightened and turned to look in the direction of the

door. When Lavina walked in a moment later, her face fell.

Lavina laughed and shook her head. “You’re not glad to see

“Well, schur,” Linda said quickly. “But I thought you were

“He was fussy and stayed up most of the night, so now he’s

so I could get out for a bit. She told me she wouldn’t let him sleep

all day so he’d keep us up again.”

“You look like you need a nap,” Rose Anna told her.

“It’s tempting, but I need to stay to my goal of finishing this

quilt,” she said as she threaded a needle.

“Could he be teething already?”

Lavina shuddered. “I hope not. He’s not three months old yet.

I’ve heard about teething from my friends.”

Soon it was like it had been for so long, everyone chattering

and sewing, the mood as bright and cheerful as the fire.

But Rose Anna felt a growing restlessness. She put her quilt

aside, went downstairs to make tea for their break, and found

herself staring out the kitchen window. The trees were bare and

black against the gray sky. Snow had stopped falling, coating

everything with a white blanket that lay undisturbed. She found

herself pacing the kitchen as she waited for the kettle to boil.

Finally, she knew she had to get out and burn off her restless

“I’m going for a walk,” she announced when her mudder and

schweschders came downstairs. She pulled on rubber boots and

her bonnet, then shrugged on her coat. “I won’t be long.”

“But, kind, it’s cold out there,” her mudder protested.

“She’ll be fine, Mamm,” she heard Lavina say behind her before

she closed the back door.

Barbara Cameron is giving away an autographed copy of Home to Paradise to TWO of my readers (US only please). Giveaway is subject to Reading Is My SuperPower’s giveaway policies which can be found on the Disclosure & Policies page. Enter via the Rafflecopter form below.

41 responses to “Author Interview (and a Giveaway!): Barbara Cameron”