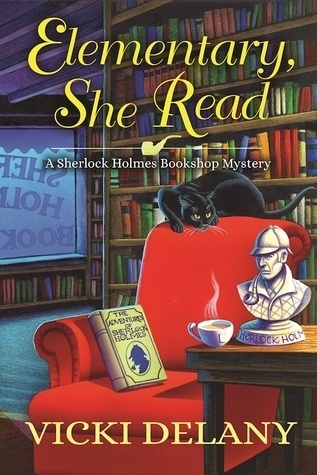 Gemma Doyle, a transplanted Englishwoman, has returned to the quaint town of West London on Cape Cod to manage her Great Uncle Arthur’s Sherlock Holmes Bookshop and Emporium. The shop–located at 222 Baker Street–specializes in the Holmes canon and pastiche, and is also the home of Moriarty the cat. When Gemma finds a rare and potentially valuable magazine containing the first Sherlock Homes story hidden in the bookshop, she and her friend Jayne (who runs the adjoining Mrs. Hudson’s Tea Room) set off to find the owner, only to stumble upon a dead body.

The highly perceptive Gemma is the police’s first suspect, so she puts her consummate powers of deduction to work to clear her name, investigating a handsome rare books expert, the dead woman’s suspiciously unmoved son, and a whole family of greedy characters desperate to cash in on their inheritance. But when Gemma and Jayne accidentally place themselves at a second murder scene, it’s a race to uncover the truth before the detectives lock them up for good.

Fans of Sherlock Holmes will delight in the sleuthing duo of Gemma and Jayne in Elementary, She Read, the clever and captivating series debut by nationally bestselling author Vicki Delany.

Elementary She Read by Vicki Delany will appeal to the bookworm as well as the cozy mystery fan!

Gemma Doyle is very much like the Sherlock to whom her bookstore pays homage. Sharp powers of observation, keen deductive reasoning, and a lack of tact in delivering them, etc.  But you forgive what could be annoying because she’s such a hoot. She’s unintentionally funny and awkward, and you just want to hug her. Though, I don’t think that would go over especially well.

The back-and-forth between Gemma and her best friend (and business partner) Jayne is stellar and lots of fun. Particularly when it comes to Gemma’s British English and Jayne’s corrections/translations for the Americans of West London, Massachusetts.

“Officer,” Jayne whispered to me.

Bottom Line: Elementary She Read is a cozy mystery with all the token elements – but in this case, under Vicki Delany’s supervision, they don’t feel token. They all come together naturally and with wit to form a great story that will have you smiling. The mystery is intriguing and the characters are engaging. I’m ready for the next book! 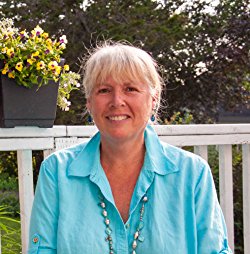 is one of Canada’s most prolific and varied crime writers. She is the author of twenty-three published crime novels, including standalone Gothic thrillers, the Constable Molly Smith series, and the Year Round Christmas Mysteries.  Under the pen name of Eva Gates

she is the national bestselling author of the Lighthouse Library cozy series.

, will be released in March 2017 from Crooked Lane Books.

Vicki lives and writes in Prince Edward County, Ontario. She is the past president of the Crime Writers of Canada.


Other Books by Vicki Delany

17 responses to “Book Review (and a Giveaway!): Elementary She Read by Vicki Delany”