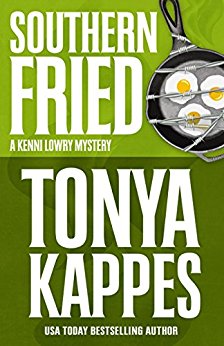 In the South, it’s better when the food is fried and the secrets kept buried…

After the dead body of a beloved Cottonwood resident is found tangled up in an electric fence, Sheriff Kenni Lowry has a hunch that somethin’ ain’t right.

Her investigation heats up with a fierce cook-off competition, a euchre game where the intel is sweeter than the brownies, and a decades old family recipe that may just be the proof in the pudding.

The icing on the cake: Kenni is fighting an attraction to her recently sworn-in deputy sheriff, and election season is hot on her tail.

When the killer comes after who she holds most dear, even her poppa’s ghostly guidance might not be enough to keep her and her own out of the frying pan. 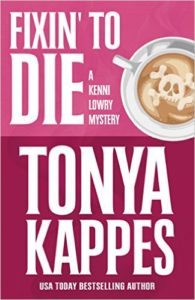 “Secrets in a small town don’t stay secret for long.”

I love this series from Tonya Kappes for many reasons. For one thing, it makes me laugh. Kappes has got a small Kentucky town – and all its quirks – down pat (more on that in a minute). From lines like, “I wasn’t sure, but I think she just blessed my heart without saying it” to the Sweet Adelines (a Baptist Women’s church group), I spend a good deal of time chuckling between the pages of this series.

Which brings me to another reason I love these books – the fictional town of Cottonwood is based on Kappes’ home town which also happens to be where I live! While you don’t need to be familiar with my small Kentucky town to enjoy Southern Fried, people who ARE from here will find it that much more engaging. Side note: Every time I encounter the character Doolittle (a female), I can’t help thinking of our real life Deputy Sheriff “Doodle” Peel and then I end up shaking my head in amusement yet again at that name!

But I also love these books because Kenni is such an endearing character.  She’s tough – sometimes not really as tough as everyone sees her and other times a lot tougher than she thinks she is. But she’s also a little quirky and a little insecure, and she is the only one who can see her Poppa’s ghost (the former sheriff) who pops in and out to help her solve the murder mysteries she encounters.  Her budding relationship with her Deputy Sheriff Finn makes me smile and I’m looking forward to seeing where it goes from here.

And lastly? I love these books because the whodunit isn’t all that obvious. Just when I think I’ve figured it out, a new wrench is thrown into the mix and I’m back to square one. Twists and turns are made all the more entertaining by the gossipy-catfighting Euchre players and the equally gossipy dispatcher.

Bottom Line: Southern Fried picks up right after the ending scene in Fixin to Die but I think it would still do just fine as a stand alone. Fun characters, a quirky town, and Southern phrases will all keep a smile on your face … though you may also find yourself swooning at Finn on more than one occasion. Kenni Lowry is one of my fave cozy mystery heroines, and I look forward to joining her on more adventures!


(I voluntarily reviewed a complimentary copy of this book which I received via the publisher. All views expressed are only my honest opinion.)


Reviewer’s Note: Readers may want to be aware that there is some mild cursing throughout the book. 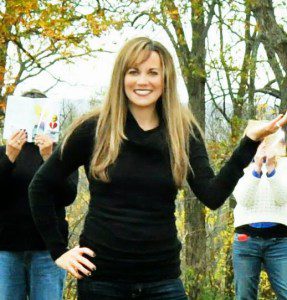 For years, USA Today bestselling author Tonya Kappes has been self-publishing her numerous mystery and romance titles with unprecedented success. She is famous not only for her hilarious plotlines and quirky characters, but her tremendous marketing efforts that have earned her thousands of followers and a devoted street team of fans. Be sure to check out Tonya’s website for upcoming events and news and to sign up for her newsletter! Tonyakappes.com


Follow along with the Great Escapes Virtual Tour for a list of tour stops and more books by Tonya Kappes!