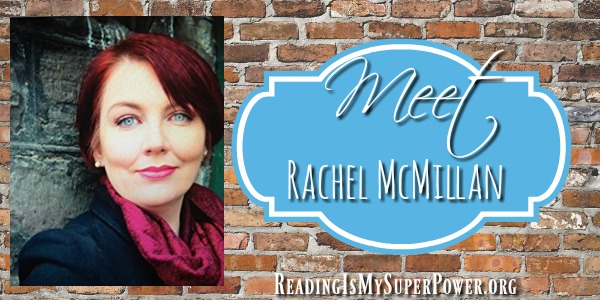 I am always delighted when I get to chat with this supercool author!

Rachel McMillan is a keen history enthusiast and a lifelong bibliophile. When not writing or reading, she can most often be found drinking tea and watching British miniseries. Rachel lives in bustling Toronto, where she works in educational publishing and pursues her passion for art, literature, music, and theater. 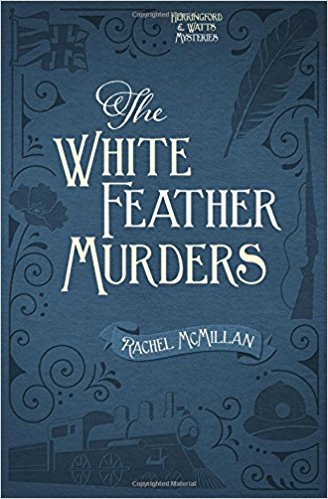 Toronto, 1914. Merinda Herringford and Jem Watts never could have imagined their crime-solving skills would set them up as emblems of female empowerment in a city preparing to enter World War I at the behest of Great Britain. Yet, despite their popularity, the lady detectives can’t avoid the unrest infiltrating every level of society.

A war measure adopted by Mayor Montague puts a target on Jem and her Italian husband, Ray DeLuca. Meanwhile, deep-rooted corruption in the police force causes their friend, Constable Jasper Forth, to wonder if his thirst for upholding the law would be best quenched elsewhere.

In spite of these distractions, Merinda, Ray, and Jasper join with other honorable and courageous city leaders in the Cartier Club, which exists to provide newly arrived residents of Toronto with a seamless integration in the city.

When a club member turns up dead, bearing a slanderous white feather, will Merinda, Jem, and those they hold dear be able to solve the high-stakes mystery before they’re all picked off, one by one?

Hello, oh supercool friend! As you know, I start all of my guests out with a fast four:


Carrie: I haven’t had a piece of carrot cake in years. And now – of course – i want one!


Carrie: But of course!

Rachel: THIS IS SO HARD! There are subcategories and then subcategories therein and subcategories of Broadway Musicals.  So, I will instead tell you my FAVOURITE SONG to sing in the shower/dusting/writing “Ten Minutes Ago” from the Rodgers and Hammerstein ‘Cinderella’


Carrie: You can never go wrong with Cinderella!


Around here, reading is pretty much everything. I know you love to read as well. When you’re not reading – or writing another fabulous novel – what do you like to do?

Rachel: I love to watch baseball. I am a HUGE Toronto Blue Jays fan!!!! HUGE! I like to go to games and I edit/write while the game is on mute. I LOVE to travel –near and far— and I LOVE to go to the theatre. I see a lot of theatre (I’ll often hop over the American border for theatre)


Other than the Bible, what are five of your most cherished books?

Carrie: I have (also sadly) never read The Blue Castle, but it comes up so often in this question that I’m going to have to prioritize it in the TBR galaxy!


If you could join your four main characters – Merinda, Jem, Jasper, and Ray – in 1914 Toronto, what would be your role in the group? The instigator? The voice of reason? The one swooning over Ray while everyone else solves mysteries? ?

Rachel: This is SUCH A cool question. I would definitely not be the voice of reason. But, I would be the facilitator.  Jem, Merinda, Jasper and Ray need dinner reservations? I would connect them to other people and other social circles that could assist them in investigations. Introducing Jem, Merinda and Jasper and Ray to likeminded people. I tend to be a bit of a connector.

Since The White Feather Murders is the final book (sniffle) in your debut series, what has been your favorite part of writing the Herringford and Watts Mysteries?

Rachel: When writing Herringford and Watts, I really met some of my best friends. That sounds insane, I know; but I spent SO much time with these characters. SO much time. First with writing a draft, then while revising for the book to go on submission to publishers, then once we found a publishing home with writing 3 novels and 3 novellas pretty much in the span of a year, these characters were my home.  And I suppose what I love most about them is that they surprised me.   I didn’t consciously have to think about what they would say or do, I knew them so well, I was just taking dictation as they did their own thing.   My other favourite thing about the series is that it made me fall in love with Toronto all over again in a way I never thought possible.  I always wanted to move to Toronto when I was a little girl and I never thought I could possibly love my city-home more, but I do.  Jem and Merinda’s Torontonian world is a valentine to my city and I cannot walk Toronto streets daily anymore without peeling back the curtain and remembering a moment where I was inspired for a scene, or a piece of architecture that drove me to the library’s archives for information on its place in the 1910s.

Carrie: Oh I love that! Characters who become your best friends and a love letter to your city, yes!


What do you most want readers to take away from The White Feather Murders?

Rachel: I want readers to recognize that historical fiction is a lens through which we can find parallels between the past and our current world.  To this end, I hope readers will be challenged to see that while we have come so far, we still have such a long way to go. “Speaks for those who cannot speak for themselves” from Proverbs was always a major theme in the Herringford and Watts series and I hope it resonates through this book.  I also hope readers will be challenged to keep an open mind when it comes to perceiving women’s roles: especially in church circles.  I wrote this series partly to work through how difficult it is for me to find a place in a church community where wives and mothers are the natural trajectory for women in a congregation. At one point, Jem tells Ray that he “can’t fit women into boxes.”  This is me using my characters as a platform.  A friend once told me she was at a new church and didn’t fit into any of the listed Sunday School classes because she was in her 30s and single and driven by career ambition.   Some women are called to be wives and mothers. Some women represent Christ’s love and His advocation for women in other places. There is room for all.  Finally,  I hope they grab at life and love!  Merinda finds herself on the cusp of war looking back through moments she may have taken for granted as change surges through her.  We all need to stop and enjoy ourselves and the people around us a little more now and then.


Carrie: This has been such a unique – and important – series for each of these reasons. And it’s been a lot of fun to read too 😀

Rachel: I just signed a contract for a new series with Thomas Nelson/Harper Collins set in 1930s Boston and featuring Hamish DeLuca (yes, that DeLuca –Jem and Ray’s son): an anxiety ridden- cyclist -bookworm who joins his cousin Luca for a summer in Boston and ends up discovering a confidence and deductive skill he never had when his cousin’s nightclub endeavors go horribly awry with murder.   Along with his “girl Friday”, Reggie Van Buren, Hamish perfects the Lindy Hop, develops a new community and finds a magical new life in a city of liberty.    This series is quirky and noir-ish and infused with Revolutionary War history and heartbreaking and winsome and fun.  And, like Herringford and Watts, themes of gender equality and immigration play a big role.  The first book, tentatively titled “Join, Or Die” releases Summer 2018.


What about you? If you were friends with Jem, Merinda, Jasper and Ray – would you be an instigator, a facilitator, a follower, or a swooner? 😉