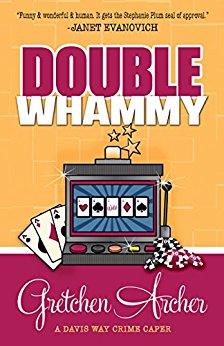 Davis Way thinks she’s hit the jackpot when she lands a job as the fifth wheel on an elite security team at the fabulous Bellissimo Resort and Casino in Biloxi, Mississippi.

But once there, she runs straight into her ex-ex husband, a rigged slot machine, her evil twin, and a trail of dead bodies. Davis learns the truth and it does not set her free—in fact, it lands her in the pokey.

Buried under a mistaken identity, unable to seek help from her family, her hot streak runs cold until her landlord Bradley Cole steps in.

Make that her landlord, lawyer, and love interest. With his help, Davis must win this high stakes game before her luck runs out. 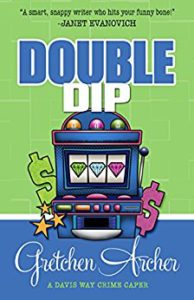 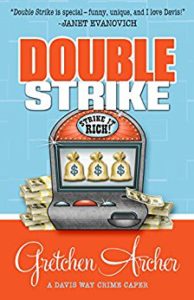 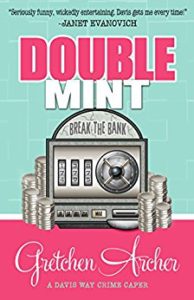 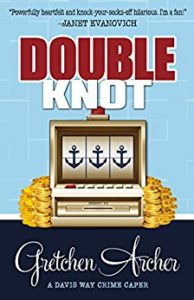 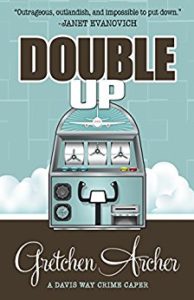 “And with that, I was well on my way to prison.”

Oh my goodness, y’all. This book – this heroine – is so delightful and quirky!

Davis is an endearingly flawed heroine whose first person narrative voice adds a whole other level of snark and hilarity to the story, which is not without its heart tugging moments as well.  I knew I loved her when she dubbed the two beefy security guys “Teeth” and “No Hair”, highlighting their dominant physical features. I completely embraced her when she developed a serious crush on the guy whose condo she’s subletting, based solely on his pictures and his clothing.

The mystery (more than one) is really well presented, but it’s the process of solving the various dilemmas that’s even more fun. Davis is a hoot and her methods (both her own and the ones she’s assigned) are intriguing and clever. Supporting characters are also flawed and endearing – endearing because of the flaws in many cases – and more than one thread is introduced in this first book that will carry over into the rest of the series. (Though, not to worry, the specific story arc in Double Whammy is tied up at the end.) George is another character you’ll come to love as the book progresses – and, of course, there’s Bradley Cole.

Bottom Line: Humor, snark, a little romance and a lot of fun are the hallmarks of this unique cozy mystery! Davis is a mix of Stephanie Plum (from Janet Evanovich’s series) and Sandra Bullock in Miss Congeniality, and you’ll often find yourself just wanting to hug her. While chuckling at the quirkiness that makes her distinctly “Davis”. I’m anxious to check out the other books in this series now (thankfully, there are 6 out so far so I don’t have to wait) to see how some of the subthreads play out. Great characters, great narration, and a great mystery equal a great read!


Reviewer’s Note: Readers may want to be aware that there is some scattered cursing throughout the novel and implications (though nothing outright descriptive or graphic) of “sexy times”. 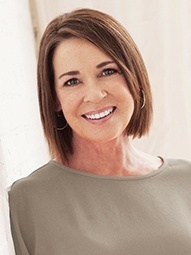 Gretchen Archer is a Tennessee housewife who began writing when her daughters, seeking higher educations, left her. She lives on Lookout Mountain with her husband, son, and a Yorkie named Bently.

Gretchen Archer is giving away a set of the entire Davis Way series (for Kindle or Nook) to one of my readers! (Open internationally, except for prohibited by law) Giveaway is subject to Reading Is My SuperPower’s giveaway terms which can be found here. Enter via the Rafflecopter below.


What about you? If you had an evil twin, what would his/her name be? And how would I tell you apart? 😉

43 responses to “Book Review (and a Giveaway!): Double Whammy by Gretchen Archer”